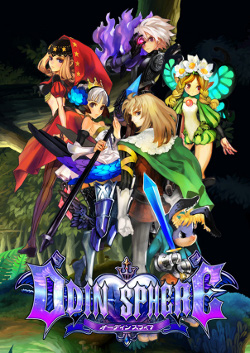 War rages over possession of the Crystallisation Cauldron, an artefact so powerful that it once brought an entire kingdom to ruin. As conflict ensues between the Demon Lord Odin of Ragnanival and the fairy queen Elfaria of Ringford, five destined individuals are drawn into the conflict. Armed with magical Psypher weapons, these heroes must carve out their own stories in the annals of history.

An action RPG from the always excellent Vanillaware, Odin Sphere is truly a masterwork of a game, an immersive experience that looks gorgeous, sounds pleasant and is absorbingly addictive to play. A leading name in its genre, it remains one of my favourite games for PS2.

The world of Odin Sphere

An action RPG set in a luscious fantasy world, Odin Sphere gives you the chance to play as five different characters in the intertwining chapters of their lives. Presented as books read by a little girl in an attic, each character’s story must be completed before moving onto the next, with the five main stories intertwining and finally coming together in preparation for an action-packed finale replete with boss battles.

Gameplay-wise, each character’s story follows much the same layout. Stories are divided into chapters framed by cutscenes, before you are sent into the level proper. Each level consists of a number of individual stages linked together to form a path to an inevitable boss confrontation. Stages are set on circular worlds in which waves of enemies will attack you – although once cleared, those same worlds will become relatively safe havens unless you restart the entire level.

The battles themselves are fast and fluid, with each playable character handling differently in combat. The game is no pushover, however – even normal battles can prove a challenge, whilst for the underlevelled and underprepared, boss levels will be nigh impossible.

What puts Odin Sphere head and shoulders above the average action RPG, however, are all the little extra details on top of the solid gameplay base. Even levelling up doesn’t work as you might expect – instead of gaining experience through defeating enemies, you earn it by eating food – either from HP-restoring fruits you grow yourself from seeds (more on this on a moment), ingredients purchased from travelling merchants or more complex dishes whipped up at a café or restaurant. Cooked meals are are an amazing source of EXP, but they don’t come cheap – not only do you have to pay for your meal, but you also have to supply the recipe and ingredients yourself.

In addition to gaining EXP for HP, the game also boasts a parallel levelling scheme for your magical abilities. Every character’s weapon is built around a magical crystal known as a Psypher. Psyphers gain their powers from Phozons, particles released when enemies are defeated. Phozons can be absorbed directly into your weapon to increase your Pyspher Level (gradually unlocking various magical abilities) and restore your stamina (run out and you’ll become dizzy and unable to fight); however, they also have another, equally important use.

Throughout your journey, you will pick up seeds that can be planted on stages to grow healing fruit. In order for these seeds to grow into full-fledged plants, they must absorb a given number of Phozons – only then can they bear their delicious produce – there’s even a plant which grows sheep! And, as if that wasn’t a neat enough idea, you’ll also be able to use seeds for another purpose – should you find an egg and place it on the ground, it will hatch into a cute chick. Feed the chick on seeds and it will grow into a chicken, which can be killed for its meat or used to generate more eggs.

In-level crafting is also a vital part of gameplay. As you progress through the game, you will unlock alchemical recipes, which can be used to combine ingredients into potions for both offensive and defensive purposes. It’s added gameplay elements like these that make Odin Sphere more memorable and intricate than the average action RPG, and while it can sometimes be a little frustrating trying to track down the right ingredients for a healing potion or a particular recipe, overall the game is a fun experience.

Gwendolyn: A Valkyrie princess dedicated to serving her family, Gwendolyn wields a spear in battle. Her wings make her skilled at diving attacks and long glides, but this also means it can be hard for her to turn quickly and deliver a follow-up attack. She also learns healing spells comparatively late, which means you’ll be reliant on food and potions for a while.

Cornelius: A human prince who has been transformed into a rabbitlike Pooka, Cornelius searches for a way to return to his original form. Despite his lack of stature, he is a capable sword wielder, with a fast combo attack and a spinning sword strike that can easily slice up the enemy.

Mercedes: Forced to take up the mantle of Queen of the Fairies after her mother’s untimely death, Mercedes struggles to overcome her immaturity and win the respect of her people. Although she is able to fly and wields a long range bow, Mercedes is probably the least fun to play as, since her weapon requires periodic reloading, which can only be done on the ground and takes up precious time when the enemy is approaching.

Oswald: A dark knight wielding a cursed blade, Oswald can transform into his shadow self, increasing strength at the cost of draining his stamina. Probably the easiest character to play as.

Velvet: Granddaughter of the mad King Valentine, Velvet lives in exile with her brother Ingway. She may be the physically weakest of the playable characters

The stories of the five playable characters interweave to create one coherent whole that may not be clear or apparent first time around – although fortunately a timeline is provided in which you can rewatch key scenes in chronological order if need be. At the heart of the tale is a war over possession of the powerful and dangerous Cauldron of Rebirth, but Odin Sphere’s story is rich in details, and its character-based approach ensures that you care about the individual players in the tale.

Vanillaware have established an amazing look and feel for their games, and Odin Sphere is certainly a flagship title in this regard. Although releases on newer consoles have the advantage of added sharpness and definition, Odin Sphere remains as beautiful today as it ever was. Everything from characters and levels down to the tiniest of details is well-designed, and overall the game is a joy to behold.

Starting from its hauntingly beautiful Celtic-style opening theme, Odin Sphere also makes a strong showing on the musical front. Listening to the soundtrack as a standalone reveals a large number of slightly remixed tracks used for the battle stages, but the audio component of the game is strong overall.

Odin Sphere is a hauntingly beautiful game that deserves to be regarded as much for its artistic merit as for its gameplay. One of my favourite titles for PS2, it provides a challenging and engaging experience that is also a feast for the senses.

This entry was posted in Games and tagged PS2, RPG, vanillaware. Bookmark the permalink.

One Response to Odin Sphere