Secret of Mana: Original versus remake 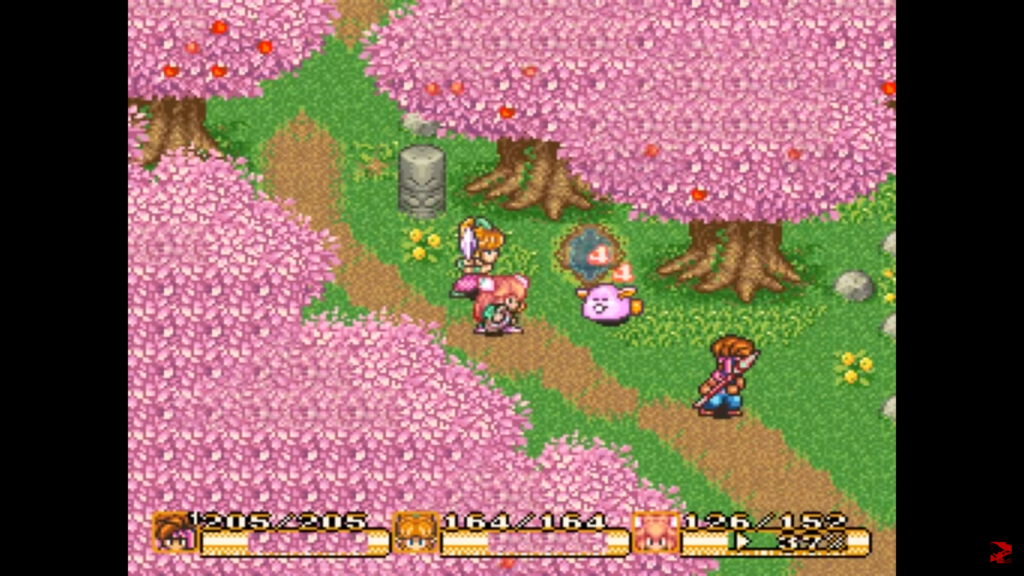 I’m late to the party on Secret of Mana. Back in the days of the Wii shop, I played past the bit where the main character gets kicked out of his village, only to fail to recruit the girl early and subsequently die in a “[CHARACTER] was never heard from again” incident. Despite resolving to move past this setback, it was only the release of both the PS4 remake and the Switch Collection of Mana that finally got me to touch the game again.

Prior to spending any more money on this title, I did attempt to do my research. I watched YouTube videos that compared the two versions and advised on which was better. Based on the recommendations in those videos, I couldn’t decide – so I ended up just buying both versions and playing through them back to back.

Secret of Mana is a beloved fan favourite from Square’s SNES RPG heyday. Other games from that era include the excellent Chrono Trigger, and the elaborate and absorbing Final Fantasy VI. With all that in mind, my expectations were high, and I was looking forward to finding out what all the fuss was about.

Unlike its turn-based siblings, Secret of Mana is an action RPG, albeit one where spamming the attack button repeatedly is not the key to success. It’s a game with something of a troubled development history – it was originally intended to be a SNES CD game until the cancellation of that peripheral forced the game’s content to be cut back to fit onto a regular SNES cartridge. Some of the unused assets were recycled into Chrono Trigger, but the damage was done – later sections of the game are rough and unpolished when compared to the earlier content. Everyone’s favourite example here is the Moon Palace – a dungeon where all you have to do is walk across a black screen until you find a switch to activate.

But even if we account for these issues, Secret of Mana comes across less as a rough diamond and more like a catalogue of what not to do when making a game. Let’s examine some of the specific issues.

Game Design: what not to do

Like so many other RPGs, Secret of Mana starts with an unremarkable protagonist who just happens to acquire a legendary sword. Unfortunately for him, drawing the sword also attracts a load of monsters to his home village, and so he is permanently exiled. Thus begins a journey to unleash the power of Mana Seeds and stop the machinations of the evil Empire. At best, the story feels phoned in – villains come and go, portentous revelations are shoehorned in at the end, and a fair chunk of the game is spent just going from one town to another because the legendary Sage might be there.

Due to space limitations, the English dialogue is pretty concise, with nothing in the way of character development. The hero is completely without personality, while his two companions fare a little better. The game’s developers were proud to have written a leading female character who didn’t have any romantic interest in the hero, but the catch is that her entire reason for coming on this adventure is to rescue her boyfriend. Apparently it’s a real leap forward for a female character for her entire story to be defined by a man other than the protagonist.

The sprite, meanwhile, starts off as a trickster character who tries to scam the hero, but who is largely unremarkable beyond a spell of amnesia that is meant to be important, but feels tacked on and disconnected from the plot. Perhaps their greatest claim to fame is that, as a genderless non-human, they are given they/them pronouns in the remake translation. Your mileage may very as to whether this counts as some sort of representation or not.

Graphics are the one place where Secret of Mana can stand strong alongside its contemporaries. Both the sprites and the word they inhabit are rich and attractive, showing off 16-bit graphics at their best. From the cute series staple, the Rabite, to a forest that showcases four seasons on different screens, the game is at least pleasing to the eye.

The soundtrack is often praised, too, but whilst I found it reasonably catchy and serviceable, it doesn’t scale the heights of Chrono Trigger or Final Fantasy. Themes are often overused to the point where a decent song just becomes a little tedious, whilst many have short loop times that just compound the problem. Even one of my favourite tracks, Mystic Invasion, only runs for 59 seconds.

But what about the remake? 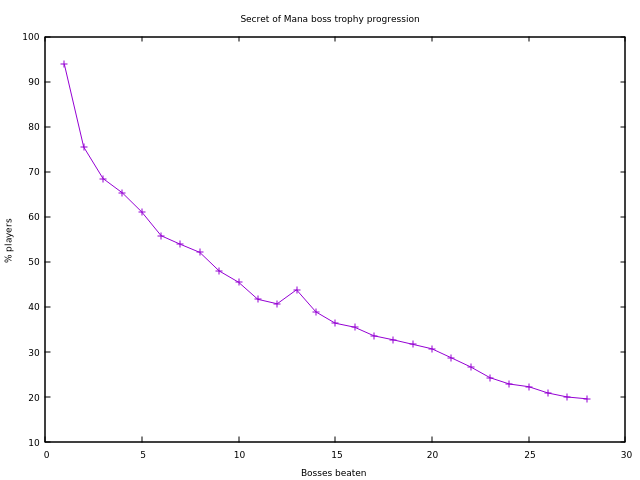 Boss trophy progression (with one out of order). Over 90% of players made it to the first boss, but fewer than 30% got as far as beating the final boss.

Despite its many flaws, Secret of Mana’s cult following meant there was plenty of appetite for a remake. Surely this was the chance to right the many wrongs with the gameplay, and to restore the story to its original vision. All of that missing content could finally be returned to its rightful place.

Sadly, the truth was far more mundane. Few remakes have been cheaper or more disappointing than that of Secret of Mana. There are a handful of improvements, which we’ll cover, but everything else is pure disappointment.

First, let’s talk about the most noticeable aspect of the remake. Although the game has been remade in 3D, it isn’t good 3D – in fact, all the assets are lifted from the mobile game, Adventures of Mana. Everything is hideously brightly coloured, a slightly nauseating assault on the eyes that just gets worse the more you look at it. When you interact with elements of the environment, the characters all merge together into one amorphous blob. It’s hard to see where the edge of the screen is, meaning you’ll frequently step onto the next screen when you didn’t even want to. The UI is equally cheap and basic – not only does it reimplement the awful ring menu, but even if you rename the characters, there are places in the menu where the default names are still hardcoded. 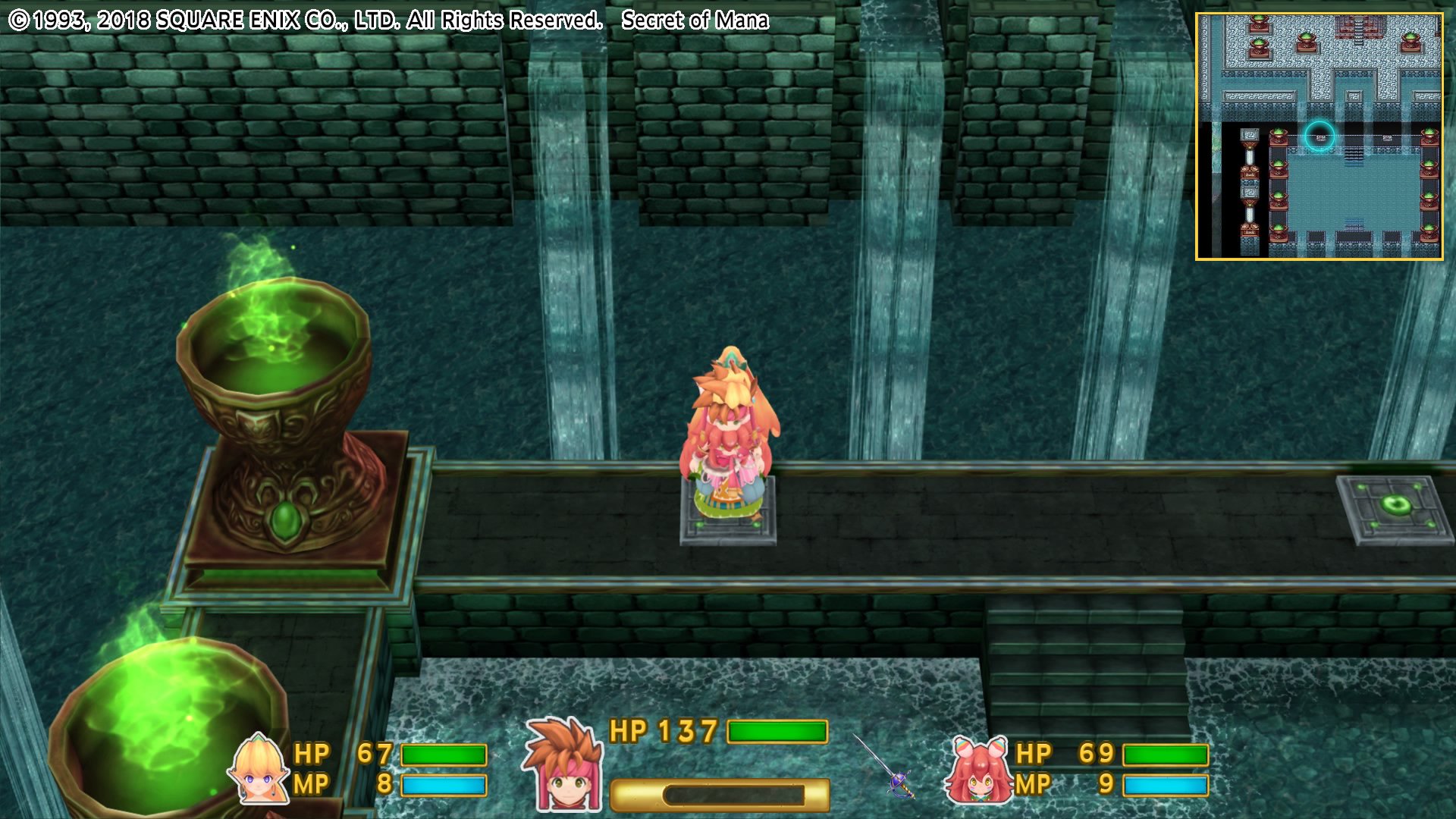 The game itself is a monster-for-monster reimplementation of the original in the new engine – there’s been no attempt to add any new content whatsoever. A few things have changed with an eye towards improvement, but not always with success. Here are the headlines:

Secret of Mana was a game I wanted to enjoy, but ultimately neither version of it really gelled with me. The original is full of poor design decisions and cut content that just made it a little too tedious to be truly enjoyable. Meanwhile, the lack of effort put into the remake represents a real missed opportunity.

With a 3D remake of Trials of Mana due in 2020, I’ll be giving that game the same treatment.

One Response to Secret of Mana: Original versus remake