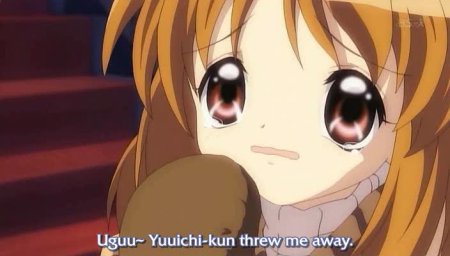 Entry Three
It is only the third episode, but already I have acquired a sizable number of candidates for my ultimate harem. Through some carefully planned reverse psychology, I have managed to bring Makoto into my home, enabling me to work on her at my leisure. Trying to elicit contact information for the other girls is difficult, however, and every waking moment must be spent wandering around time in the hopes of meeting up with at least one of them.

Makoto
In order to erase my negative relationship score with Makoto, I decided to skip the preliminaries and bring her straight home to live with me. Through the clever application of reverse psychology, I was able to secure her position in the home by pretending to not want her there, thus ensuring that she would stay and that the others would accept her. I have not furthered the pursuit for now, for I wish to fully investigate her personality before deciding on the most suitable approach.

Nayuki
Now that I have more girls to attend to, I have to admit that I have let the situation with Nayuki slide a little. At first it was going well; I was able to gain her sympathies by pretending the Makoto situation and adapting to my new school were stressful events, but unfortunately I blew it by missing a lunch date with her. My hope is that I can easily repair the damage by treating her to a meal (see below for my initial ‘food strategy’ experiments).

Akiko
Much as I hate to admit it, there just aren’t enough hours in the day for me to keep up with the other girls and still make progress with Akiko. As with Nayuki, however, I was able manipulate her into letting Makoto stay whilst making myself appear worn out and put upon.

Ayu
Ayu has become an important testing ground for me as I attempt to find foolproof methods for use on the other girls. To that end, today I began by teasing her until she got angry, before switching into apology mode and regaining the lost ground with a treat of taiyaki. This so-called ‘food strategy’ seems surprisingly effective, but it is one I plan to use often.

Naturally, it is also important that I end each day with an increased Ayu relationship score, and thus I also spent time helping her search for a mysterious lost item of hers. Such altruism will surely convince her to depend on me in all things.

Sayuri
Once again, today’s meeting with Sayuri was only brief, but her cheerful attitude seems a hopeful starting point.

Mai
Mai remains a difficult quantity to predict, and thus I may have to do further research before attempting anything.

Shiori
Despite her claim that she does not go out often, I was able to meet Shiori again today- this time in the school grounds. Apparently, she has been absent due to illness, but my subtle probing into the nature of her condition met with limited success. I hope that her condition isn’t terminal; every harem needs a sick girl, but if they actually die it nullifies all the time and effort put into recruiting them.

This entry was posted in Kanon and tagged Kanon. Bookmark the permalink.