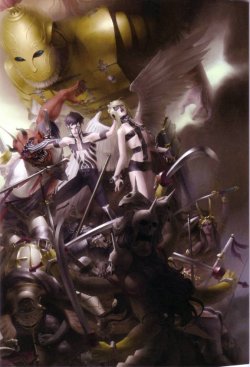 On a normal day, three teenagers go to visit their teacher at Shinjuku Medical Centre- completely unaware of the events that will befall them. A cataclysmic event known as ‘The Conception’ transforms Tokyo into a Vortex World filled with demons and illuminated by the cold light of Kagutsuchi. Only a handful of humans survive to see this new and horrific world, including one of the three teenagers, who is granted the demonic powers he will need to survive and find his friends.

SMT Nocturne sees you take on the role of the nameless hero (I chose to call him Ryuki Takeshi, and will refer to him as such from hereon in) who is given demonic powers and cast adrift to survive in a radically transformed version of Tokyo. From this point onwards, the game can be considered a somewhat dark and twisted version of Pokemon- you fight demons, recruit them to your side, and employ them in battles as you traverse this new world to find your friends.

Of course, this is no easy task, and as you wander expanses of the Vortex World, you will have to develop a liking for long, maze-like dungeons, many involving puzzle elements. You’ll be dropping through holes in the floor, getting teleported back and forth and generally finding yourself fed up with more than a few areas as you try to navigate them. Add in darkened areas and floors that can damage you (although both effects can be countered), and you will come to understand that even before you factor in battles, this game involves no small amount of commitment. Don’t get me wrong- for hardcore RPGs it’s par for the course and all good fun, but it’s definitely a game that requires no small level of patience and commitment.

The life of a demi-fiend

Battle is the flesh and blood of SMT: Nocturne, which uses an earlier implementation of the Press Turn system that also appeared in the Digital Devil Saga series. The basic idea is exactly the same: you get one turn icon per party member, with most actions consuming one icon, misses and voided attacks consuming two and criticals or passes consuming a mere half icon. The difference here is that characters take turns in order of their agility, rather than formation order- a subtle alteration that can have quite a big effect on tactics.

Of course, you aren’t going to want to fight alone (well, most people won’t, anyway), so the first order of business for any new player is to build up their party of loyal servant demons. At the beginning, a Fairy will join you, but for those looking for something more substantial, the good news is that any and every demon in the game is up for grabs. Normal demons can usually be recruited with a mix of bribes and canny negotiating skills, whilst everything up to and including bosses can be fused using the facilities of the Cathedral of Shadows. At the Cathedral, two monsters can be combined to create a new, third being, with many rules governing the process- for example, at full Kagutsuchi, a sacrifice can be offered to power up the resulting demon even more, whilst special demon types known as Elements and Mitama can be used to increase a demon’s rank or stats respectively. The possibilities are almost endless, and they must be used to their fullest to outfit a killer team.

Having a crack team of bloodthirsty demons does come with its drawbacks, however. Only Ryuki is able to replace demonic party members, use items and equip custom skills (more on this in a moment), making him the linchpin around which the whole operation must function. Given that it’s also game over if Ryuki dies, you can imagine that there’s more than one situation where you’re relying on Ryuki as healer, demon summoner and main attacker whilst everyone else has to just twiddle their thumbs. Luckily, this unequal balance was addressed in the DDS games, and by playing this one, you can see exactly why things needed to be changed.

When it comes to skills, demons have a pre-set pattern of learning particular skills as they level up, as well as a random chance of asking to change an existing skill- a risky gamble if you accept, since a useful skill could become something completely pointless. If you want to introduce new skills to your demons, you’ll have to experiment with fusion, although again there is an element of chance to this.

On the other hand, you can control exactly which skills Ryuki learns, but don’t expect that to make matters easier. Our hero learns skills by ingesting Magatama; not only does each one impart a unique stat bonus, but as he levels up, he can learn its innate skills, effectively giving him the entire range of magical, physical and support skills to choose from. Great, I hear you say, except of course that there’s a catch- you can only retain eight skills at any one time. If you choose to keep one ability at the expense of another, the discarded skill is lost forever- regardless of how much you might want, need or desire it later in the game.

Back in the field, the world you find yourself in is now controlled by the phases of Kagutsuchi- the mysterious light that appeared in the sky when the Vortex World was created. Kagutsuchi has eight phases from ‘New’ to ‘Full’, and it goes back and forth between them as you wander the world. The phase of Kagutsuchi is important to various puzzles in the game, whilst it also affects demon negotiations and fusion, especially at ‘Full’ status.

On top of all the puzzle solving you’ll have to do just to get around Nocturne’s many and vast dungeons, the game also comes with an infamous optional puzzle that involves manipulating blocks- an interesting diversion at first, but one that becomes increasingly frustrating as you struggle through its twenty consecutive levels. After dedicating the better part of a day to solving level 1-19 without help and then being forced to resort to looking up the answer to level 20 before I had to go out, it is no wonder that this is a particularly painful aspect of the game that still continues to haunt me.

An even more intense but far more rewarding optional aspect to the game is the Labyrinth of Amala, a complex five level dungeon that is progressively unlocked by fighting Fiend bosses and obtaining their Candelabra. Filled with puzzles and tough monsters, the Labyrinth is a great place for levelling up and offers plenty of rewards, including the chance to recruit Devil May Cry’s Dante as a party member. Completing the Labyrinth also alters the ending of the game, forcing you to fight a ‘final final’ boss after the regular final boss, and showing you a unique scene that isn’t really worth all the effort put into obtaining it. Still, completionists won’t be able to stop themselves from exploring the full extent of the Labyrinth.

If all that still isn’t enough for you, however, then you’ll be pleased to learn that there’s more to do. If fighting the game’s many bosses just once wasn’t enough, you can also revisit the ‘memory’ of battling them, complete with the challenge of trying to defeat them within a certain number of Press Turns. Luckily, this feature can be completely ignored, but it’s there for the more dedicated player.

As one would expect from the Shin Megami Tensei series, Nocturne offers a dark, apocalyptic tale filled with demons and references to mythology- it certainly isn’t as complex as the worlds of Persona and Digital Devil Saga, but it’s solid enough to make for a decent game. Even discounting the special ending gained by completing the Labyrinth of Amala, the game has multiple conclusions depending on which ‘Reason’ (effectively a philosophy for the new world) your character supports, although they aren’t the kind of endings that drive you to complete the game multiple times just to see them.

With its functional cel-shaded graphics, Nocturne creates the right look for a dark, monster-filled world, but unfortunately it is beginning to show its age somewhat. The human characters in particular look rather generic and simplistic, although there are some attractive monster designs to make up for it. The background music has the appropriate rock/cyberpunk edge to it and makes for solid listening overall.

Although tortuous at times, and certainly a bit rough around the edges compared to the later SMT games, Nocturne’s solid core gameplay ensures that it still a worthy and enjoyable title in its own right. It’s not one for the casual gamer, but the hardcore RPG fan will certainly want to play it and exhaust all the possibilities this game has to offer.