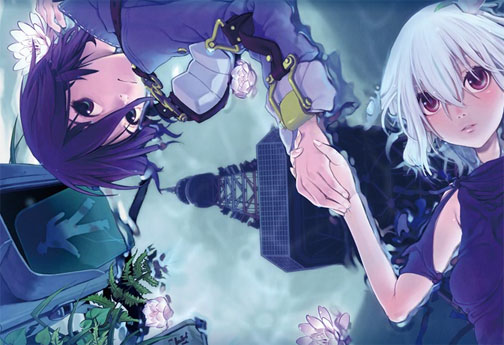 When the old man died, Seto found himself alone in a world where humanity had all but ceased to exist. Following the advice of the letter the old man left behind, Seto heads for what was once known as Tokyo Tower. Along the way he will encounter ghosts, cats and a mysterious white-haired girl who might just be the only other human left alive. Can he catch up to her and discover the truth behind the end of civilisation?

One of my many bad habits is becoming obsessed with games, anime and other forms of media on the strength of a title, cover art and a quick skim of the Amazon blurb. Thus it was that I became obsessed with the idea of playing Fragile Dreams, which in my head would be an amazing RPG in which you explored post apocalyptic landscapes that combined dream and reality. It would be an epic quest in the spirit of Ico and Shadow of the Colossus, and all in all, represent money well spent (well, except for the fact that it was bought for me as a Christmas present, but let’s not quibble over semantics here).

Unfortunately, as soon as I got the game home, I realised my mistake. Far from being the magnum opus I had somehow imagined on the basis of very little factual evidence, Fragile Dreams is a straightforward action RPG that delivers nicely on the aesthetics, but utterly falls down when it comes to gameplay.

Fragile Dreams sees you take control of Seto, a lone boy in a post-apocalyptic world (as represented by a small area of Tokyo) in his quest to make it to Tokyo Tower and find a silver-haired girl who may well be the only other human alive. Armed with a flashlight and a stick, Seto must battle his way through malevolent spirits and various other obstacles in what is largely a frustrating and painful experience.

As a person who is clearly not accustomed to physical activity, Seto is not exactly an enjoyable character to control – his movement speed is painfully slow and the ineffectual swiping that passes for combat in this game is more than a little annoying. Without the ability to lock onto your enemies, you have to just swing in the right direction and hope for the best – and you can forget about any kind of strafing or dodging facility. At the same time, you’ll be using the Wiimote to control the direction of your flashlight, a necessary tool for navigating the dark tunnels and corridors of the game. Even when you’re not fighting the impulse to swing the Wiimote like a sword in combat, somehow the setup of the controls doesn’t quite feel right, leaving you feeling even more awkward and disconnected from the game.

Of course, there are the usual RPG elements to the game; defeat enough enemies and you’ll level up, whilst as the game progresses your carrying capacity will increase and better weapons and healing items will become available. Unfortunately, no matter how good your weapon gets, there is always the danger that it will break at an inopportune moment, leaving you holding a useless bit of wood that barely makes a dent on the enemy. At one point in the game, my weapon broke at a point where I couldn’t escape a particular room unless I defeated a trio of enemies who were regenerating HP as fast as I could deplete it with my broken weapon, leaving me with no choice but to reset the game. Even towards the end, there was a point where I had to fight my way up Tokyo Tower with nothing but a broken spear (luckily the AI of the enemies attacking me was particularly poor, and I was able to just thrust upwards from a lower step without ever being in danger of getting hit).

Of course, I cannot conclude my discussion of combat in the game without a nod to my nemeses – birds. Much as I love birds in the real world, I hate them in games, ever since the days of Legend of Dragoon when a small yellow bird was somehow strong enough to wipe out my entire party. And yes, even here in Fragile Dreams, a world of ghost women who try to impale you with the needles in their back, and fire breathing dogs larger than a man, the birds reign supreme as the deadliest and most annoying of enemies. Their endless numbers, their dive bomb attacks and their relentless make the birds of the post-apocalyptic future my most hated foes.

And even when you’re not fighting, Fragile Dreams has an abundance of painful activities for you to indulge in. Early on, the game has you play a game of hide and seek with an invisible ghost girl who repeatedly chants “You can’t find me”; unsurprisingly, the irritation and frustration this brings is enough to have you swearing at the screen. And this isn’t even the worst of it – later on you’ll find yourself chasing a boy around an amusement park, which, given the your rather pathetic maximum speed, is far from fun.

With gameplay like this, once an area is cleared, you can’t help breathing a sigh of relief that you’ll never have to go back to it again – except, of course, that that isn’t the case. Quite late in the game, the story forces you to backtrack pretty much all the way back to the beginning, as if you’d actually want to revisit the areas you’d worked so hard to complete! It really is the ultimate addition of insult to injury.

Since it’s set in a post-apocalyptic world, it should come as no surprise that the story of Fragile Dreams is far from uplifting. The few character you do meet will be quirky, unique individuals, usually with some kind of personal tragedy for you to uncover. On top of that, you can also pick up items to examine at campfire save points which have been imbued with the thoughts and feelings of the people who owned them, giving you an insight into the events that caused the end of the world. There are some interesting, if depressing, story threads woven into the game, but it’s hardly enough to make up for the disappointing gameplay.

As one might expect from tri-Crescendo, the presentation is the one area in which this game excels. The aesthetics of the game create an absorbing atmosphere, with simple yet attractive character designs, creepy tunnels, hideous monsters and plenty of cats all around. Sound effects and what little music there is completes the ambience, and while the English voices are subject to odd, jarring pauses, the original Japanese audio is far superior.

Although it gets the aesthetic appeal spot on, Fragile Dreams is not a good action RPG. It’s the kind of game that makes you want to play good action RPGs, akin to an amuse-bouche for the genre as a whole.

One Response to Fragile Dreams