Thoughts on Utena from a first time viewer 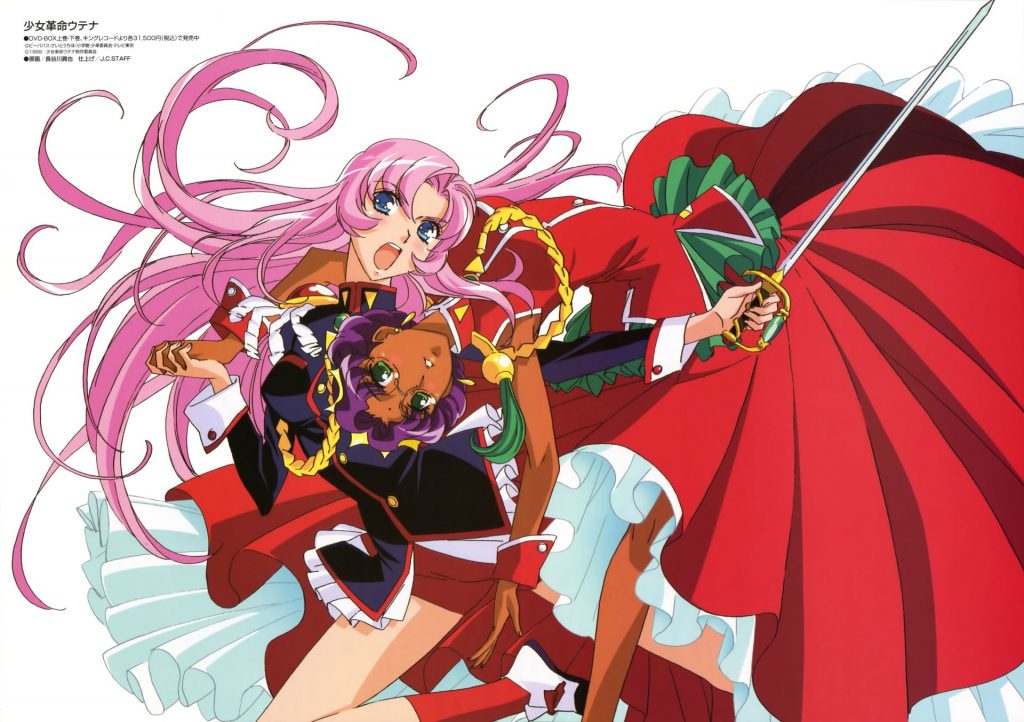 Revolutionary Girl Utena was one of the series I always thought I probably should watch, but I just quite got around to it. That all changed in the closing months of 2017, when Ana Mardoll’s blogs, coupled with a desire to see a bi main character, tipped me over from “should watch” to “okay, all I’m going to do in my free time is get through these thirty-nine episodes plus one movie”.

I now speak to you from the other side of that experience. Having delved into the writings of others on the subject, the general message seems to be that you should go back and rewatch the series to pick up on all the things you missed the first time – that on rewatch, you’ll know what’s going on and be able to pick up subtle signs. And yes, I’m thinking of doing that, but for now, I wanted to speak about what it feels like to have seen the series only once.

Utena was a series where I never quite knew what was going on. It was a series that tested the limits of what I was prepared to accept, with the strangeness of each new arc making the previous arc seem tame and really quite sensible by comparison. In the first thirteen episodes, Utena fights a series of duels atop a high tower in a forest by her school. The duels are for control of the “Rose Bride” Anthy Himemiya, who lets the current champion use a sword pulled out of her chest. The whole setting is overlooked by an inverted castle in the sky, where the power of Dios supposedly resides. Why is any of this happening? What’s it for? When do the duels end? Utena doesn’t know, and neither do we, but events conspire to keep her returning.

Then things become even more perplexing. In the next arc, Utena ends up duelling people who all have a close bond to her original opponents – and they get their swords by pulling them out of the chests of those first duellists. In the final arc, she faces everyone again, but this time in an arena filled with cars.

The prince and the princess

Taken on the surface level of “what is happening here and why”, Utena is indeed confusing. But underneath it all is something deeper – the exploration of two deeply ingrained gendered roles in our society, that of prince and princess.

In the opening narration, we’re told Utena’s backstory in the form of a fairy tale. Her story is that of a sad, lonely princess who is saved from despair by a dashing prince. So impressed is she by this that when rides off into the sunset she decides to become a prince herself. But, warns the narrator – is that really such a good idea?

Key to this narrative is the relationship between Utena and Anthy. After winning the very first duel, Utena becomes engaged to Anthy. This is perfect for Utena – how better to be a dashing prince than to have someone to protect? As long as she fights and wins duels, Anthy will be safe from falling into the hands of one of the other duellists, who would at best care little about her feelings, and at worse outright abuse and mistreat.

But what Utena doesn’t know is that Anthy is only playing the role of the princess for her own ends. Anthy’s true role in this fairytale is that of the witch, manipulating events from behind the scenes to play out as she would wish.

Anthy’s role as the witch is yet another gender stereotype, and one which is just as toxic as that of the prince and princess. Witches have power, but the patriarchy doesn’t like women with power. Witches are often depicted as mean and hateful beings, as ugly on the outside as they are on the inside.

In the closing episodes, we learn of how Anthy came by her role. In the distant past, Anthy’s prince, Akio, was the saviour of everyone and everything. It almost cost him his life, and Anthy was the one who made a stand and said “no more”. In return, all the people who still wanted Akio’s help turned on her; ever since then she has endured the pain of being run through by countless swords.

It’s easy to see Anthy as the victim of society’s misogyny. She’s the woman who reports being raped by a well-loved celebrity, and in return receives hatred and death threats for ruining his reputation. She’s learnt not to exercise her power openly, but to work behind the scenes, as women in patriarchal societies often do. She pretends to be the helpless princess, because that’s what Utena and the other duellists want. Late in the series, Anthy opens up to Utena, and admits she has been manipulating her all along. But Utena has an equal confession – having someone to protect let her fulfil her role in the narrative. Much as they have grown to care for each other, neither embarked on this relationship for completely altruistic reasons.

In addition to Anthy and Utena, the series plays host to a number of supporting characters, each fucked up in their own way. As a rule of thumb, the bishier a male character is, the more morally corrupt and on their way to becoming a Nice Guy they are. Take Akio and Touga, for example – both good-looking prince types, admired by all they see, and both completely morally bankrupt and apt to be manipulating events from afar.

In contrast, characters such as Saionji and Miki are only eggs rather than fully hatched Nice Guys. Saionji is often a jerk, but every so often, we do actually feel sorry for him. Unlike Akio and Touga, he has no idea what’s really going on, and wears his heart on his sleeve, making him prime manipulation fodder. It’s clear that Touga would love to wean Saionji into becoming a full-fledged Nice Guy, but every so often, we see a glimpse of a possible redemption for him.

Miki, on the other hand, appears so inoffensive that he actually befriends Utena and Anthy, even though he too is a rival Duellist. But Miki has his own issues – in wanting to be his sister’s ‘prince’, he fails to recognise that she is an autonomous being. One minute, he’s idolising the image he has of her, the next he’s slut shaming her for not living up to that unattainable perfection.

There are also two additional female Duellists. First up, we have Juri, a character who strays dangerously close to the ‘tragic lesbian’ trope. Her unrequited feelings for another girl leave her open to manipulation, and even when she wakes up to that fact, she uses it as a driver instead of moving on to a healthier relationship. I still like Juri a lot, but she doesn’t make life easy for herself.

Finally, there’s Nanami. Nanami initially comes across as an annoying rich girl with a brother obsession, a character whose plots to humiliate Utena and Anthy will always be foiled. But in the long run, Nanami is the most sympathetic and human character of them all. Yes, she’s no stranger to the whole selfish manipulation thing, but we feel sorry for her because she’s so obviously trapped between two worlds. Everyone else involved in the duels – even Utena – has willingly signed up to them for one reason or another. With Nanami, it’s like she wanted to be one of the characters who came along for the ‘isn’t it just a normal high school’ parts of the series, but was drawn into all the extra stuff whether she liked it or not.

Many bloggers have spent a while analysing the symbolism of Utena, particularly its use of colour. I don’t want to do a retread of that work, so instead I’d like to focus on some of the imagery that really struck me as I watched the series.

I could hardly finish this review without touching upon the Utena movie. As with many anime movies, Adolescence of Utena is a retelling of the series – or perhaps it’s the next iteration in the cycle of events at Ohtori Academy. In this version of events, the relationship between Utena and Anthy is more overtly sexual, but what stands out for pretty much everyone is the lengthy final sequence – in which Utena turns into a car. Yes, I too thought I had read that wrong when I first saw it on Wikipedia, but it’s no mistake. Pursued by other vehicles, Anthy rides the Utena car away from the confines of Ohtori and out into the real world. It may sound ridiculous, but it’s actually an engaging sequence, ultimately depicting how Anthy and Utena’s relationship lets them escape the timeless cycle of events. Perhaps in the real world, they can have a happy, fulfilling relationship.

The more you write about Utena, the more you want to write about it. One one level, this is a series that is bizarre and perplexing by anime standards. On another, this is something truly special, a series so deeply layered with meaning and symbolism that there’s always something new to think about. If you haven’t already done so, do yourself a favour and immerse yourself in this amazing world.