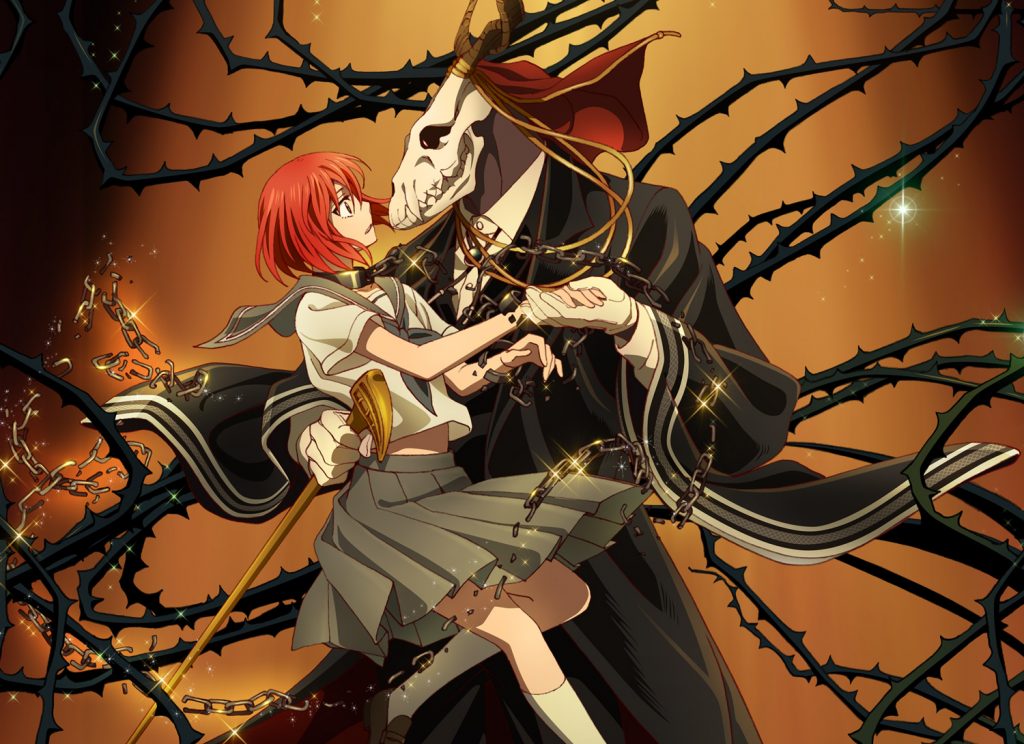 Chis Hatori has always been able to see magical beings, a talent that has both made her life more dangerous and estranged her from what’s left of her family. Having lost all hope and optimism for her life, Chise puts herself up for sale at a magical auction, and is bought by the mage Elias Ainsworth. Elias, who is a being somewhere between human and fae, is looking for both an apprentice and a future bride. Under his care, Chise starts learning more about the world of magic, but along the way she ends up teaching Elias about the nature of humanity.

The Ancient Magus’ Bride is a delightful fantasy manga, with beautiful artwork, an engaging story – and a faithful anime adaptation. I could wax lyrical about almost any aspect of the series, but the one thing that really intrigues me enough to write an article about is the relationship between the two main characters, Elias and Chise.

The very title of the series shaped my initial expectations as to how this relationship would play out. The title “Ancient Magus” put me in mind of an older, wiser character, a mentor who would guide Chise through her initiation into the world of magic. As it turned out, the reality was a little different.

When it comes to magic, Elias does indeed know his stuff, although he is just one of a number of magic users, all with different specialisms and methodologies. However, in terms of emotional maturity, he’s little more than a child. Chise may be his junior, and dealing with her own issues arising from a difficult past, but in this arena, she’s definitely the teacher.

Right from the start, the relationship between Elias and Chise is a bit of an odd one. Although he claims she’s to be his bride, this fortunately doesn’t translate into something weird and creepy – instead, they take on a more wholesome mentor/apprentice relationship. But Chise is far from emotionally stable at this point – her ability to see spirits has resulted in both the loss of her immediate family, and her inability to settle in with any of her more distant relatives. The series begins with her selling herself into slavery, and indeed when she first comes to Elias she cares little for her own safety and wellbeing.

Over time, Chise does begin to recover somewhat, making friends and allies in the magical community, and starting to value her own existence enough to genuinely want to continue living. She clearly grows attached to Elias, although it’s never quite clear how much of this is genuinely about who he is as a person, and how much is just down to him being her saviour and protector.

For his part, Elias has never really experienced emotions before – to him, they are an interesting phenomenon to observe, but little more. Chise’s presence starts to awaken him to deeper feelings, although he lacks the ability to truly comprehend what’s happening. He knows that he feels better when Chise is close by, and ‘cold’ when she is away, but he lacks the vocabulary to describe these new sensations in terms of recognisable human emotions.

Events take a darker turn when Chise starts spending time with her first human friend – a young girl named Stella. Suddenly, Elias has a rival for Chise’s time and affections, and what’s more, Stella is someone Chise befriended herself, rather than someone Elias introduced her to. In a fit of temper worthy of a young child, Elias runs off into the woods, forcing Chise to go after him and bring him back.

This tantrum is nothing, however, compared to what happens later on. When Chise is afflicted with a dragon’s curse, Elias learns that one way to break it would be to sacrifice another life. For Elias, the choice is clear – he cares more deeply about Chise than he does about anyone else, so the most important thing is to keep her alive. It never occurs to him to debate the morality of this move, or to acknowledge that Chise would not want to be saved in this way. He even selects Stella – his supposed rival for Chise’s affections – as the sacrifice.

Fortunately, the sacrifice doesn’t happen, although Chise finds out about Elias’s plans, and soundly rejects him. I have mixed feelings about what happens next. It’s good to see Chise standing up for herself, and having enough of a support network that she isn’t completely dependent on Elias no matter what he does. But ultimately, of course, since the series is still ongoing, they argue, make up, and promise to communicate better in future. Elias even allows Chise to enrol in their world’s Harry Potter-esque magical school, a vast improvement from earlier chapters where he was just throwing away all of the letters inviting her to join.

Should Elias have been forgiven for wanting to kill Chise’s friend in order to save her? Will he really do better from now on? Can we chalk it all up to him being insufficiently human to understand what he was doing, and therefore everything’s fine now he knows not to do it again? In the world of anime and manga, “sorry about that whole trying to kill you thing, now let’s be friends” is a bit of a trope, but it does still feel like a horrible thing to have done, and not something to just be swept under the carpet easily. Elias even calls Chise out for her own reckless actions, but at least she’s only ever put her own life in danger – it feels a bit like gaslighting to say that’s the equal of planning to murder another human.

Where does that leave us, the readers? Given that the series is generally enchanting, of course I want to carry on with it and see what happens next – not only to Elias and Chise, but to all the other interesting characters of this world. I just hope that the future relationship between these protagonists grows into a positive and healthy one, one far away from that of a jealous controlling ‘saviour’ and the emotionally fragile woman he rescued from slavery.

This entry was posted in Editorial. Bookmark the permalink.