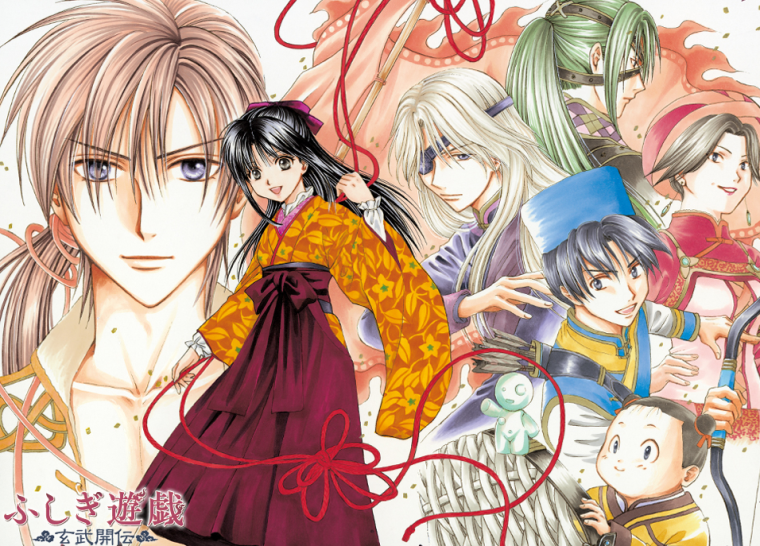 Long before Miaka and Yui entered the Universe of the Four Gods, there were two other priestesses. The first of these was Takiko Okuda, a high school student living in 1920s Japan. Hurt by the recent death of her mother, the emotional distance of her father, and the unrequited love she feels for an older man, Takiko flees into the Universe of the Four Gods. There, she becomes the Priestess of Genbu, but the encroaching winter and threats of war will make gathering the Genbu warriors far from an easy task.

A prequel to the original Fushigi Yuugi, Genbu Kaiden is a series written to satisfy fans’ curiosity about the priestesses who came before Miaka and Yui ever touched the Universe of the Four Gods. These twelve volumes focus on the first of those priestesses, Takiko Okuda.

We already knew some of her story from the original series, where we not only met the spirits of two of her warriors, but learnt of her tragic death at the hands of her own father. With continuity in mind, how would Yuu Watase choose to flesh out the story?

Genbu Kaiden is definitely what you’d expect from a prequel written ten years after the original. There are many familiar elements present – bishounen, romance, tragedy, and war – all within the familiar framework of a teenaged girl travelling to another world to find an eclectic gang of destined warriors. But there’s also a lot that has been updated, refined or altered.

Let’s start with Takiko, who proves to be a likeable and sympathetic heroine. Right from the start, we get a clear idea of her personality. She’s strong, forthright, and able to hold her own – not least because she’s trained in the naginata. But underneath, she’s also struggling emotionally – her mother has just died, and her father seems less interested in his family than in his research into the Universe of the Four Gods. Meanwhile, she’s also dealing with the obligatory unrequited love for an older, married man.

After rewatching the original series, I’m not convinced that Miaka deserves all the hate she gets, but Takiko definitely represents a refinement of the model. Miaka’s modus operandi was to angst over Tamahome or put herself into mortal danger for no good reason. Takiko does frequently get into danger, but she seems more self-aware, and able to hold her own against adversity. And of course, she does get a stormy romance arc too, but again this feels a bit more maturely written than Miaka and Tamahome’s story. There’s doubt and difficulty in Takiko’s romance with celestial warrior Limdo, but feels more nuanced.

Accompanying Takiko are a whole new set of Celestial Warriors, only two of whom we previously knew anything about. This group are a little more varied and ‘out there’ than the Suzaku warriors, as if Watase felt more free to test the boundaries of character creation. This time around we get characters like Limdo, a man who transforms into a woman when using his wind magic. Then there’s Hatsui, a young boy who can form a protective sphere around himself and fire needles at attackers, and Namame, an animated rock golem. We even get that rarest of things – a female Celestial Warrior.

This time around, there’s no rival Priestess and Celestial Warriors, but there are still plenty of bishies on the side of the villains. By way of conflict, Genbu Kaiden provides not only an impending war with another country, but also deception and intrigue within the royal family.

Overall, the plot is pretty solid, but unfortunately the pacing feels a little off. Just over the halfway mark, I began to wonder how the series could possibly have so long still to go – the warriors were gathered and it seemed as if there was little more to do. But then a bunch of new plot elements were either added or expanded, and all of a sudden everything seemed very rushed. At this point, the actual release schedule of the manga had slowed right down, and perhaps even Watase just wanted it all to be over. Supporting characters are relegated to using their powers to fight off wave after wave of enemies, while the story becomes awash with action scenes and deep dives into the intricacies of the royal family storyline. Then, before you know it, Takiko makes her wishes, meets her untimely end, and it’s all over. Wait, you say, was that it?

Visually, Genbu Kaiden represents something of an evolution in Watase’s style over the original Fushigi Yuugi. There are still plenty of beautiful young men and lots of flowing hair, but overall there’s more of an economy of lines, somewhat akin to Watase’s work on Arata Kangatari. Genbu Kaiden does look good, but personally I prefer the beautiful, flowing lines of Fushigi Yuugi, Ceres and Alice 19th.

Fushigi Yuugi Genbu Kaiden is a decent prequel that takes the classic Fushigi Yuugi formula and applies a somewhat more refined and mature take on it. That being said, however, it will never capture my heart and imagination in the same way as the original series.

This entry was posted in Manga and tagged fushigi yuugi. Bookmark the permalink.