The recent release of Persona 4 Golden on Steam was considered by some to be the end of an era. This was the last big RPG to be exclusive to the PS Vita, and a release on another platform seemed to be the final blow for a system that few even cared about any more.

It’s true that the PS Vita never really reached great height of popularity. It seemed to have little identity of its own, with its catalogue dominated by ports, remakes, and games that were also readily available on PC and PS4. Its one claim to uniqueness – the rear touchpad – was pretty unreliable and difficult to use in the handful of games that did support it. Unlike the 3DS, with its rock solid battery, the Vita tended to lose all charge if you looked away for even a moment. And the system’s insistence on being tied to a single PSN account and its requirement for proprietary memory cards definitely did not endear it to players.

And yet, for all that, I still like the Vita – both the chunky original version and the slimmer rerelease. I’ve spent many hours on it, playing games both good and bad. Even now, I still get it out for a spin from time to time – after the battery is sufficiently charged, of course.

And so, with the Vita having been pronounced dead by many, I thought it was about time to celebrate some of the games that sucked away many hours of my life. Unsurprisingly, many of these games aren’t Vita exclusives, but it was on that console that I first encountered them.

I’d love to have more visual novels on this list, but my backlog of Vita and PC titles is far longer than the ones I’ve got around to reading. Amnesia is one that I have managed to cross off my list, and I did rather enjoy the time I spent with it.

An otome game, Amnesia begins with the protagonist having lost her memories, and having to choose up front which of the handsome guys in her life she thinks she remembers being in a relationship with. What follows are four routes – plus an unlockable True Route – filled with twists, turns and drama. While several of these relationships turn out to be pretty unhealthy and even downright dangerous, there are glimmers of hope for a happy ending for our heroine. My personal favourite route is that of Kent, the smart yet romantically awkward university student.

Before I ever laid my hands on 999 and Virtue’s Last Reward, I spent a fair amount of time with its sibling series, Danganronpa. Trapped in a high school with a group of high school prodigies and a sadistic monochromatic bear, Makoto Naegi must solve a series of murder mysteries and eventually identify the culprit behind it all. The gameplay might seem a little unpolished by modern standards, but the exaggerated personalities, bright colours and spatters of bright pink blood ensure that this is a memorable experience. 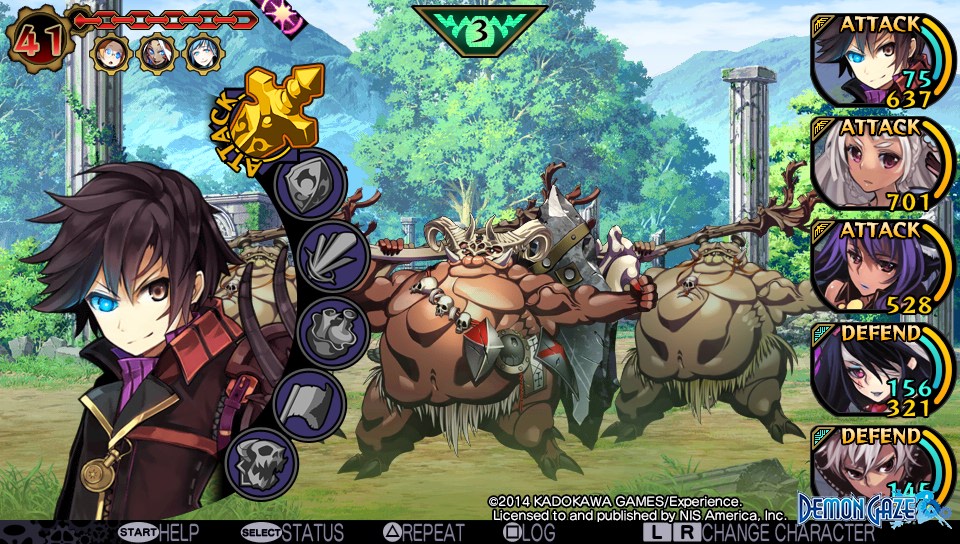 Thanks to the tediously dull Operation Abyss and Stranger of Sword City, it’s actually been some four years since I’ve properly touched a dungeon crawler. But before that aversion set in, I had great fun with another game from the same stable – Demon Gaze. The game lured me in with its brightly attractive character designs, but as it turned out, the gameplay was pretty solid as well. While it’s true that I never managed to defeat the final boss of the main story, I put in a lot of hours getting to that point.

Few games combine contrasting elements as well as Eufloria. The music and graphics are gentle and calming, and yet at the same time, the game thrusts you into the middle of epic space battles between rival forces. Planning and strategy are required if your empire of plant-based life forms are to defend their planets from hordes of unfriendly invaders. Like nature itself, Eufloria is both beautiful and savage. 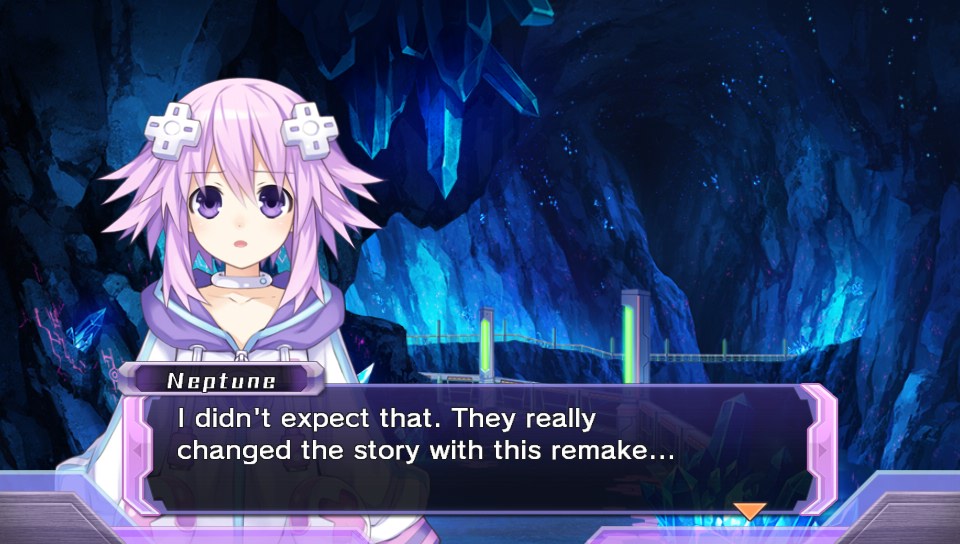 The Vita is awash with Neptunia remakes and spin-offs, but it’s worth a nod to the remake of the very first game. Gameplay has been overhauled for consistency and quality, turning the sub-par original into a solid and serviceable JRPG. The remake is even somewhat self-aware, with the characters dropping in fourth-wall-breaking jokes about deja vu.

In the end, I played and reviewed so many Neptunia games that I got majorly burnt out on the series, but taken on its own, this isn’t too bad a game.

Known in my household as “the rubbing game”, Monster Monpiece is infamous for the gameplay mechanic where you rub monster girls in sensitive places until their clothes come off and they power up. This is bound to put a lot of players off, which is a shame, because if you can look past that, this is actually quite a serviceable card battler. With a lengthy single-player campaign, and, at time of release, even a few people playing online, there’s actually a fair amount to keep you occupied. If you like turn-based card battles, and aren’t too disturbed by the rubbing aspect, this is a solid title.

The Legend of Heroes: Trails of Cold Steel

The Legend of Heroes is a series I really want to get properly into, but because of the hundreds of hours of investment required, so far I’ve only managed to play about half of this one title. Still, I’ve enjoyed my time with the game – the gameplay is solid, characters are interesting, and I’m always a sucker for a ‘Social Link’ style mechanic. I just wish there was more time to hang out with everyone on campus – I hate being forced to choose between them. 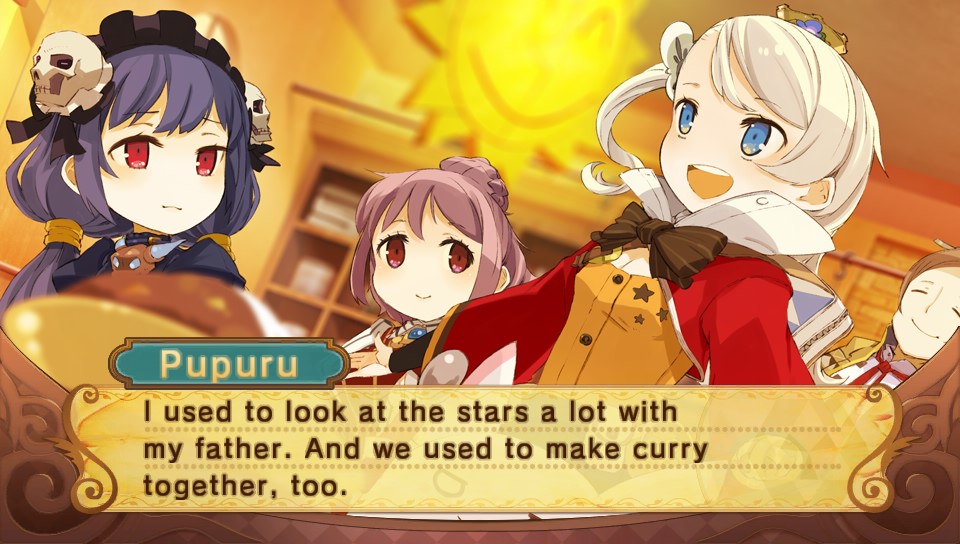 Even though I’ve never properly tackled Nethack, I have a soft spot for roguelikes. My first taste of them came with this title, a game in which you must brave dungeons in order to bring back the ultimate curry recipe. As you might guess from that description, the story and characterisation aren’t the deepest around, but nonetheless the gameplay is pretty solid. After an easy first dungeon that lulls you into a false sense of competence, the game ramps up the difficulty to proper roguelike levels. Still, even when the game treats you to a string of stupid deaths, you can’t help heading back in for “just one more go”.

Soul Sacrifice was my first ever Vita game, and for that reason I’ll always regard it somewhat fondly. Gameplay consists of short missions in which you fight monsters and rescue fellow wizards – standard stuff, but with one interesting mechanic. When you defeat an enemy, you can either “save” it, by purifying its soul of evil, or “sacrifice” it, dooming it to eternal damnation. Your choices affect both the characters you can meet and recruit, and your own levelling up.

Although I wouldn’t recommend it for extended play sessions, Soul Sacrifice is fun in short bursts. I did also invest in the expanded version, Soul Sacrifce Delta, but have yet to play it.

Often described as “2D Minecraft”, Terraria is a charming sandbox game that lets you explore biomes, dig deep beneath the earth, and build up your own little village. Eventually, you must challenge powerful bosses in order to progress, ultimately releasing corruption upon the world.

Although I was reluctant to participate in the boss fights and unleash the corruption, I did enjoy messing around with Terraria. Delving deep into the Earth, mining ore, and frequently falling to my death, made for an absorbing time.