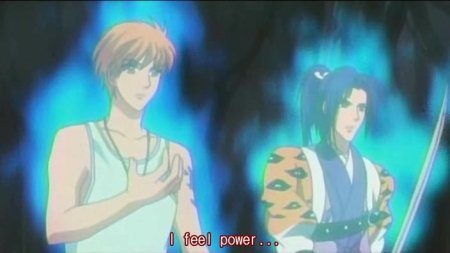 Yorihisa wanders around in a thick fog.

Yorihisa: What’s happening? Has all the animation budget been spent?

The fog clears a little, and he finds himself watching a flashback of a time when his brother left him behind. This time, the brother tells him to go to east before he awakens in the present.

Yorihisa: A flashback…I guess this means this is my character episode.

At Akram’s lair, Ikutidal reports to his master.

Ikutidal: Since I am not a destined main character, I have yet to find any leads on the four Yu-Gi-Oh cards.

Akram: Although I have never previously made any effort to get these essential items, it is imperative that I have the Yu-Gi-Oh cards. Therefore, I shall just sit here and let you look for them- and here, take this proto-monster of the week rock.

Ikutidal takes the rock and turns it into a spider.

At the manor, Tenma has also had a dream about being told to go the east.

Tenma: Some random guy in a dream told me to go east, so obviously I have to do that.

Takamichi: This incident is clearly important to the plot. I think they should go- otherwise nothing will happen in this episode.

Tomomasa: Doesn’t east sound a little vague, though? I mean, the guy could have given you a more precise address.

Yorihisa: It’s okay, this all conveniently ties in to a past experience of mine. Leave it to Tenma and I- our HARD GAY pairing will solve this.

Akane: I’ll come along too, since I can use my Cheer ability from the game to raise your stats.

No one notices that Genji’s spider of evil is spying on them.

Akane, Yorihisa and Tenma begin their journey. As they walk through the town, they notice that it is unusually empty.

Yorihisa: Oh no, the animators forgot to draw any generics!

As the trio investigates, a white fog appears.

Yorihisa: And now the background is going again! Is the budget really that low?

Ikutidal: This fog wasn’t created by the Demon Clan, so it really must be due to the animation budget.

As Yorihisa and Tenma run, they suddenly find themselves in the forest of Yorihisa’s past. As they continue onwards, Yorihisa activates Flashback Mode.

In the past, Yorihisa polishes his ‘sword’. His brother comes in.

Brother: This is your first important HARD GAY mission, Yorihisa, but I know you will be able to manage it. After all, I have taught you everything I know.

Yorihisa: I will do what I can to service you and the young master.

The next day, Yorihisa and his brother are on guard duty for the young master’s entourage when numerous generic bandits appear.

Brother: Leave it to me, for I am invincible until the plot decrees otherwise!

Brother fights off many of the bandits, but the young master is captured and taken away. By the end of the battle, only Yorihisa and his brother are alive.

Brother: It looks like our allies were too generic to survive. Come on, we must rescue the young master.

In the present, Yorihisa and Tenma reach the same mansion that the kidnapped young master was once held in. Yorihisa indulges in Flashback Mode again.

Brother: Yorihisa, you are a destined bishounen and must survive until the time of the TV series. Therefore, let me go ahead and risk my life.

As the two brothers make their surprise attack on the mansion, Yorihisa’s enthusiasm gets the better of him. He dives in, rescues the young master and starts running away, only to be attacked from behind. Brother appears from nowhere to take the fatal blow himself.

Yorihisa: Brother!! What have I done- now I have no one to be HARD GAY with!

In the present, Yorihisa drowns in angst as he launches a repeat version of the surprise attack, this time with Tenma. Tenma rushes ahead to rescue Akane, just as Yorihisa once did.

(Yorihisa: Oh great- if this continues, I’ll have to sacrifice my life and bishie good looks to save wife-beater Tenma.)

As it turns out, Akane isn’t in the room, but an attacker rushes towards Tenma anyway. Yorihisa takes the blow.

From a fog-bound world, Akane can see everything.

Akane: Oh no! This is all because I didn’t have the chance to raise their stats with Cheer!

Deep Yellow: Don’t worry, Akane, for they are both protected by Destined OP Character status. This is just a test to see if they are worthy of a Yu-Gi-Oh card.

Deep Yellow: Yes. They must find the HARD GAY connection that links them together.

Tenma helps Yorihisa get up. He supports Yorihisa as they walk back down the road.

Yorihisa: I’ve never before been stabbed by such a powerful ‘sword’.

Ikutidal: You must have it by now, so hand over the Yu-Gi-Oh card!

Yorihisa: Let me handle this, Tenma.

Tenma: What are you talking about? You’re injured- if you were a normal human, you’d probably have passed out from blood loss by now.

Yorihisa: This man is experienced in HARD GAY. You wouldn’t be able to handle his ‘sword’.

Yorihisa begins attacking, but he is too weak to stand up to Ikutidal.

Ikutidal: I have no interest in being HARD GAY with a weakened man, but if you insist, I have no choice but to let you feel my ‘blade’!

Tenma rushes in and attempts to attack Ikutidal, but is easily thrown back.

Yorihisa: I thought I told you to stay out of HARD GAY matters!

Tenma: You idiot- only by working together can our HARD GAY beat this opponent! Insert song on!

An energising insert song starts to play. Yorihisa indulges in a quick flashback.

Yorihisa: Very well, then- let’s fight side-by-side just as I once did with my dear brother!

Deep Yellow: You have found your HARD GAY connection! Take this Yu-Gi-Oh card and use its ridiculously overpowered special attack to defeat your enemy!

Tenma: Our power is surging!

Ikutidal: I’ve just been standing here all this time, but now I will attack! HARD GAY blast!

Akram: Ikutidal, the time has come for you to teleport away.

Ikutidal: But Master, I have never experienced such intense HARD GAY!

Akram: Blasphemy! No one is more HARD GAY than I am!

As Ikutidal teleports away, Yorihisa and Tenma look at each other with new HARD GAY understanding.

The fog clears, and everyone is magically back in town.

Tenma: Akane, I just had the greatest experience! Who would have thought I had HARD GAY impulses?

Yorihisa: My wound seems to have magically gone- even the blood has disappeared from my clothes. Now, Akane, in return for boring me with your life story the other day, would you listen to mine?