Although it wasn’t ready for this week (the first proper Tuesday Rumble of 2007), Tuesday Rumble will soon sport its own chibi Dii, official presenter of HARD GAY corner.

How to write a harem series
Harem series are big business, but how can the average writer break into the genre? Here are a few tips.

a. A childhood friend or relative (usually a cousin) who has loved the lead ever since he visited her home many years ago. Although her feelings for him are clear to everyone else, she has difficulty expressing them to lead, who consequently thinks of her as just a good friend.

b. A rich girl (usually only half Japanese) with little to no knowledge of everyday life until the lead introduces her to simple pursuits such as buying and eating ice cream cones. She becomes determined to learn how to cook in order to win the lead.

c. A sick girl who is suffering from Unspecified Anime Illness, a plot related disease that only prevents her from living a normal life at key points in the story. Towards the end, she may be hospitalised for a few episodes before suddenly recovering at the end.

d. The obligatory tsundere. She claims to hate the hero and is often physically violent towards him, but will open up and enter deredere mode after they are placed into an intimate situation such as being forced to take shelter together after getting soaked in a rainstorm.

e. A tomboy or sports fanatic who is ostensibly only interested in being a boisterous friend of the lead, but secretly wishes to be more feminine.

f. An alien princess who shares some kind of connection with the lead, and may even claim to be engaged to him. She can be extremely jealous and possessive, but often fails in her schemes to snare the lead’s heart.

g. A well endowed older woman (often a teacher) who has an unhealthy desire for younger men. She will often smother the lead with her breasts, or tease her rivals about their small assets.

h. A devoted maid who either serves the lead or the alien princess. The maid will refuse to let her master or mistress out of her sight, and will inevitably eavesdrop or spy upon the lead when he is in an awkward situation with another girl.

i. A younger sister, not usually related by blood, who has a rather extreme devotion to her onii-san.

j. An otherwise emotionless android who learns what it means to be human after falling in love with the lead. She has impressive combat abilities.

k. A shy meganekko (often a librarian) who never quite plucks up her courage to confess to the lead no matter how many opportunities she gets. She may have a soft spot for cute and fluffy animals.

Gundam Seed Miguel
Greetings, Gundam fans! We here at Sunrise have a special announcement that is bound to interest you; in light of the enduring popularity of our Gundam Seed franchise, we have decided to invest in a new fifty episode series set in the same universe- Gundam Seed Miguel. Those of you blessed with good memories may recall that Miguel was a pilot who died in the first episode of Gundam Seed, and those who cannot remember can simply refer to one of our many ‘memory refresher instalments’ (aka clip shows). In Gundam Seed Miguel, however, events proceed a little differently; instead of dying, Miguel actually becomes the main character! This will enable us to create an entirely new series by using stock footage of Gundam Seed with images of Miguel seamlessly inserted in place of Kira! Look forward to it! 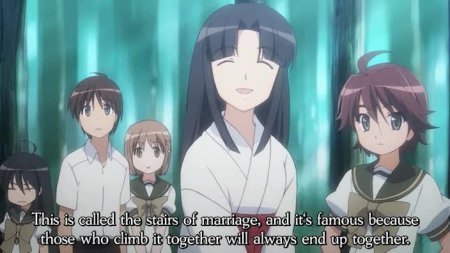 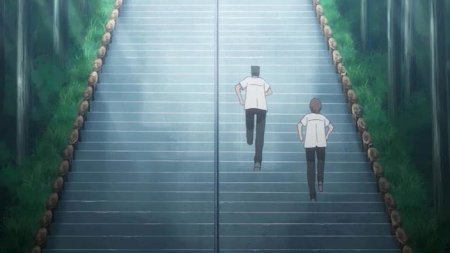 Despite the implications, Keisaku and Eita climb the steps together. 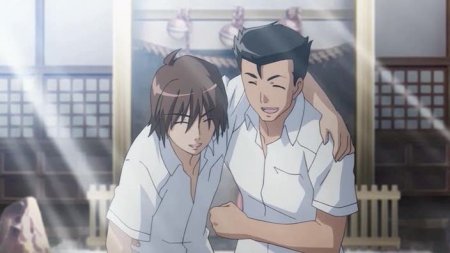 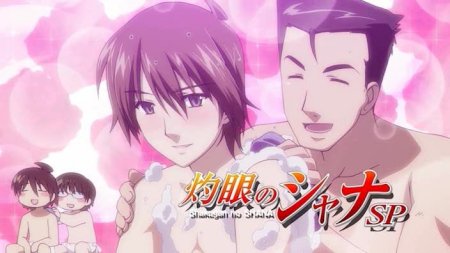 In honour of this event, a special eye catch is created. 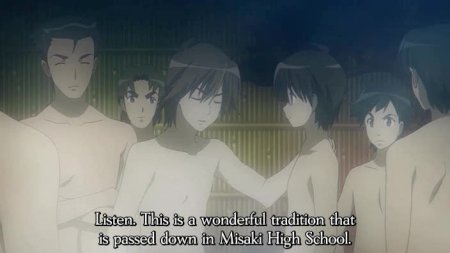 The HARD GAY bathing tradition has been passed down from sempai to underclassman for generations. 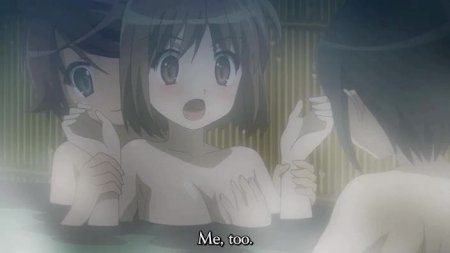 Elsewhere, the girls have to make do with HARD YURI. 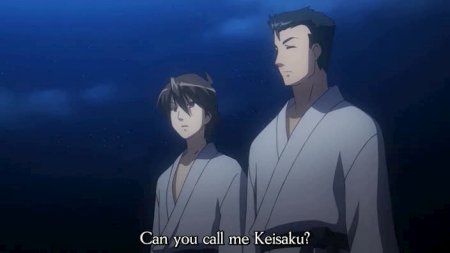 “It’s time we started addressing each other by given name.” 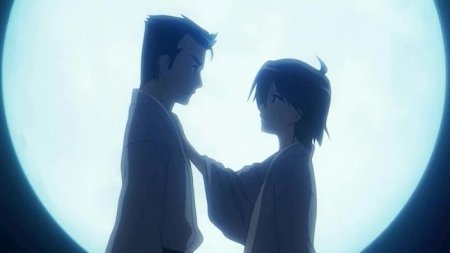 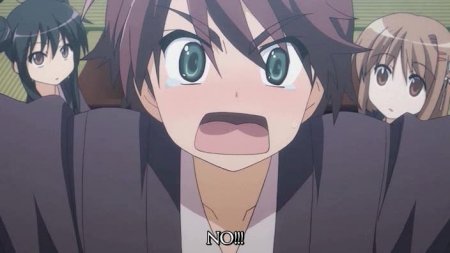 “Why is this happening? This show was never HARD GAY before!” 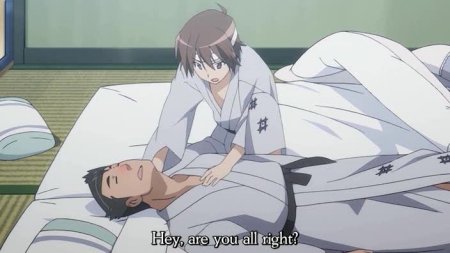 Remember: always take care when having HARD GAY for the first time.

Deep Blue: Even though you have failed every week, this episode you must destroy the Mew Mews so that our mighty alien race can take over this puny planet!

Kish: I hate to say this, sir, but wouldn’t it be easier if we had some additional help from our brethren?

Deep Blue: Fools! Only three of you are needed to fail to take over the world every week! Now go forth, and never once question the logic of the mysterious blue sphere that orders you around.

Kish, Pie and Tart leave to plan their assault.

Pie: So, what should we do this week? Should we use our powers to trap the Mew Mews in another dimension where they can’t escape?

Tart: Maybe we should try attacking them directly.

Kish: Don’t be ridiculous- let’s just create some monsters of the week that they’ll easily be able to defeat.

The trio create a Chimera Animal of the week.

Ryou: So anyway, we need you girls to go and fight the monster so that Keiichiro and I can be HARD GAY in peace.

The Mew Mews head out.

Kish: Mwahaha, I shall just stand back and watch whilst you fight my weak monster!

Mint, Lettuce, Pudding and Zakuro all attack the Chimera Animal, but because they are only supporting characters, their attacks have no effect.

The Chimera Animal traps the four supporting Mew Mews with a tentacle attack.

Ichigo: Oh no, it’s up to me now! Ribbon Strawberry Surprise!

Kish: Damn, foiled again! I’ll be back next week!

Evil lesbian trio of the week: Since the days of Strawberry Panic, evil lesbian trios have started spreading throughout anime. In the past, we’ve seen the likes of Firiel’s torturers at HARD YURI school in Good Witch, and the Yunoki fan club in La Corda d’Oro, but the most recent additions to the list are the trio of Sachiko lovers in MariMite OVA 1. 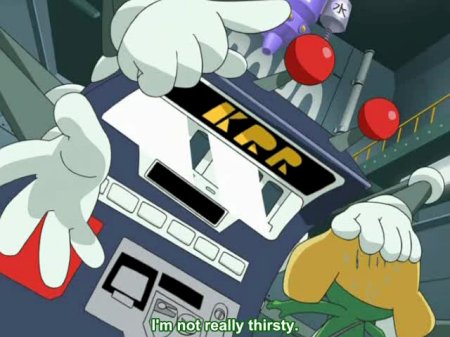 Fruit of the week: Apples and bananas have had their turn, and so this week the tomato is in the spotlight. In its natural form, the tomato caused much pain for Peet of Ginban Kaleidoscope, and it almost ended up being the only lunch option for Rebecca Miyamoto of Pani Poni Dash, but more importantly, it is a vital ingredient in Pizza Hut’s plans for world domination. 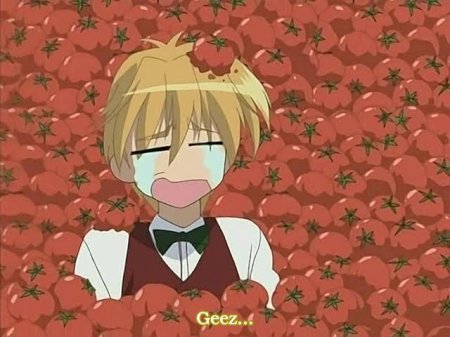 Go game of the week: Pani Poni Dash appears for the third time to collect an award for featuring a Go game. MariMite OVA 1 also featured a Go game, but they seem to be placing the stones incorrectly. 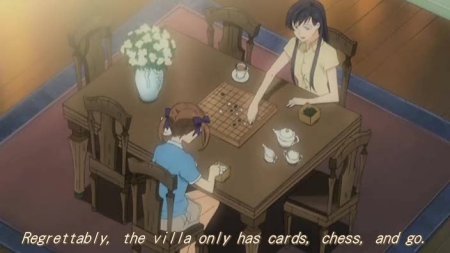 HARD GAY corner- Peacemaker Kurogane
In all honesty, what could be more HARD GAY than a bunch of men with swords living together? The story of Ichimura Tetsunosuke after he joins the Shinsengumi, Peacemaker is literally bursting at the seams with HARD GAY. From the cross-dressing Yamazaki Susumu to the strong camaraderie between various pairs of characters, it is clear that when the cameras are off, they are all enjoying a stint in each other’s beds.

The poster boy for the series’ HARD GAY must surely be none other than Okita Souji, a man who may look effeminate, but who is nonetheless a skilled ‘swordsman’. Not only is he close enough to the vice commander to be able to steal his treasured book of haikus, but he is willing to give special attention to new members such as Tetsu- at least until Tetsu finds love with Suzu, a boy his age. 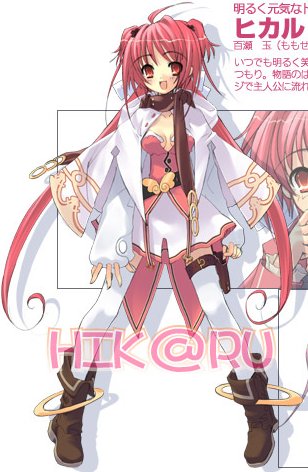 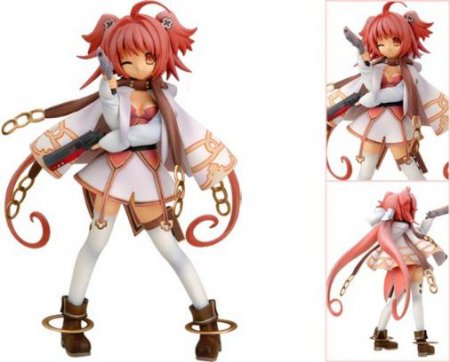 Unlike tj han, I don’t have the ability to turn a figure review into a full post, but what I can do is include one in Tuesday Rumble from time to time in place of an OST review.

This week’s focus is the attractive and well designed Hikaru (or should that be Hik@ru?) from the H-game Peace@Pieces. I hadn’t actually heard of the game prior to getting this figure, but such is its lure that I bought her anyway. The only real flaws with the figure are that the guns are a little two-dimensional, it seems near impossible to fit it into the base properly (although she does still stand up okay with one foot properly plugged in and the other just resting on the plugs) and, for me, at least, the pigtails at the back fell off and had to be glued back in. Other than these minor concerns, this one of the top three figures in my current meagre collection.

Although it is not pictured here, the base is a clear pink which complements the figure whilst generally remaining unobtrusive. 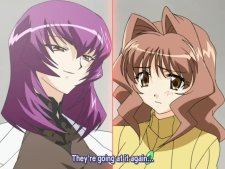 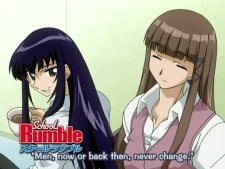 Today’s head to head is a battle between pairs of HARD YURI teachers- namely Itoko and Youko from School Rumble and this pair of teachers whose names I forget from Akane Maniax. Since these pictures say everything that needs to be said, there’s no need for me to write any more.

Amusing Search Terms
You might expect such a long list after last week’s lack of proper Tuesday Rumble, but actually all but three of these came from the last seven days.

disguise blonde episode anime blog: I rarely use the word ‘baffling’, but it seems appropriate here.

clamp rants: I hope they meant CLAMP the manga artists, and not something more dodgy.

Love Cat H-Manga: I assume this is some well-known series.

rapid roll mini game: This makes me think of Chinchiriron from Suikoden.

Mothercon: people actually search for this?

“gay gargoyles”: even gargoyles have their preferences.

under flame mai hime: What does this even mean?