Yesterday I just happened to be messing about in the WordPress admin section when I noticed this great post on how to annoy people using instant messaging. It’s rare that I find something so hilarious that I wish I had written it myself, but this just hit the spot- not least because I’ve been on the receiving end of almost all of these strategies.

Also, my blog is now over six months old; it hardly feels like I have been doing this for half a year.

Fruits Basket II: Tohru saves the world
If 136 chapters of Furuba weren’t enough for you, then fear not, because Furuba II is exactly what you’ve been waiting for! Tohru, the girl who can solve anyone’s problems, is set to return in this sequel, which sees her resolve to put the world itself to rights in her most ambitious plan yet! With her pure heart and sound advice intact, Tohru will talk to each and every generic person she meets, cleansing their hearts of even the smallest and most trivial of afflictions! To give you an idea of what to expect, we have summarise some of the early chapters below.

All this and more can be found in the new one thousand chapter epic- look forward to it! 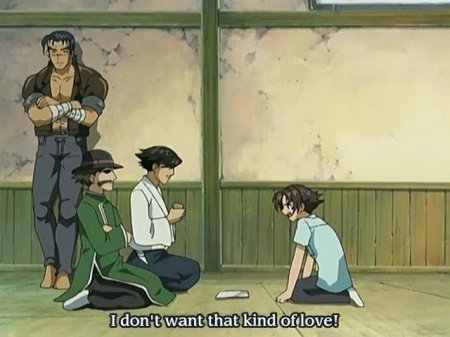 Kenichi tries to argue that HARD GAY is not for him. 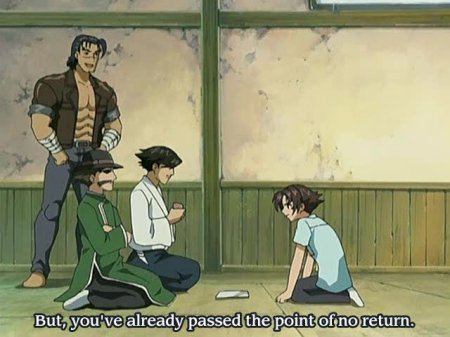 The others tell him it is too late to go back to being straight. 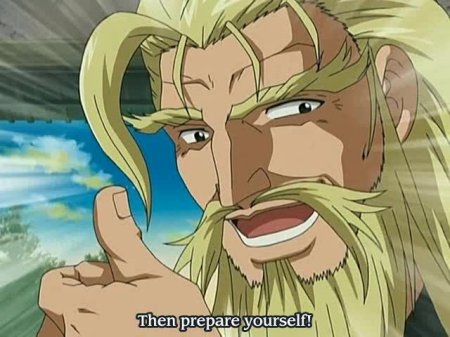 When a bearded man tells you to prepare yourself, it doesn’t take a genius to figure out what’s going to happen next. 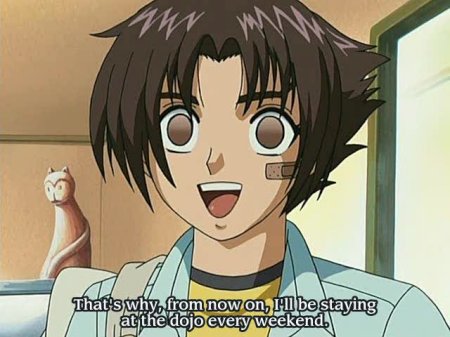 After that little experience, Kenichi is an instant convert to the ways of HARD GAY. 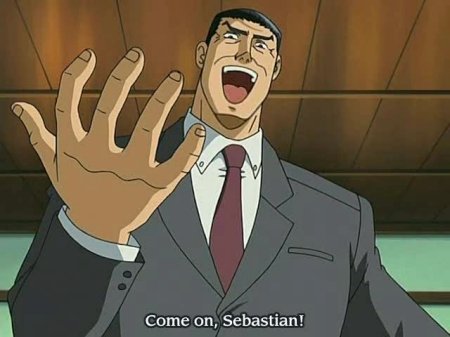 “Come here and let me feel your Zhuge Liang.” 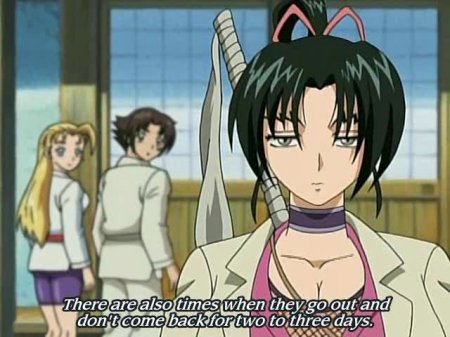 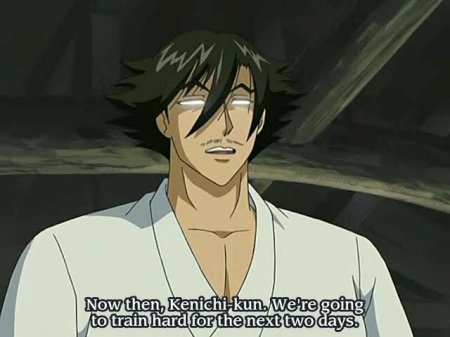 …not to mention intense training… 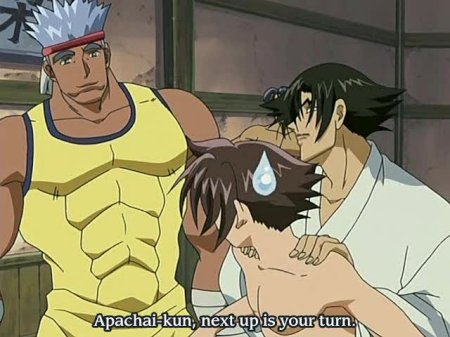 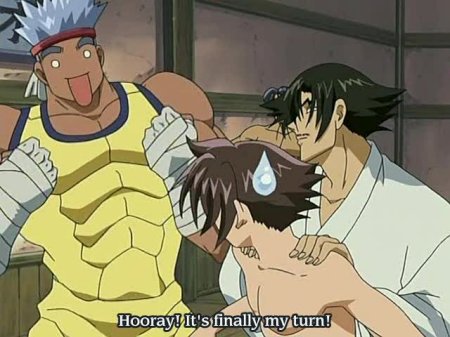 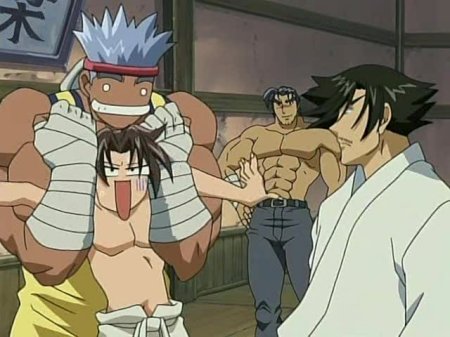 …and last but not least, intense man-on-man action.

Light and L work together on the investigation team.

(Light: Gwakaka, foolish L, I will easily outwit you, for I am justice!).

Light returns to normal and replies to L’s question.

(L: Kira, you will never outwit me, for I am justice!)

L: I’m sorry, but your team is too generic to do much more than donkey work.

Matsuda: At least I get dialogue and a personality.

Light: Shut up, you fools, none of you are worthy of even pursuing the great Kira! Uh, I mean, that’s what I would say if I were Kira, which I’m most certainly not.

Apples of the week: The mighty apple empire is spreading even as we speak, so much so that my current MSN nickname is ‘Piney Apple’. This week, the apple influence has been traced to Suzuka, Sailor Moon and Master Keaton.

Fat cat honourable mention: Despite his short puffy tail, Gorou from Suzuka deserves to be added to the roster of notable fat cats.

Most fun parody: An excuse for me to mention Chevalier; never has writing parodies (both normal and alternate) been this enjoyable.

Alcohol of the week: A special award for Master Keaton, a series seemingly drenched in alcoholic beverages. 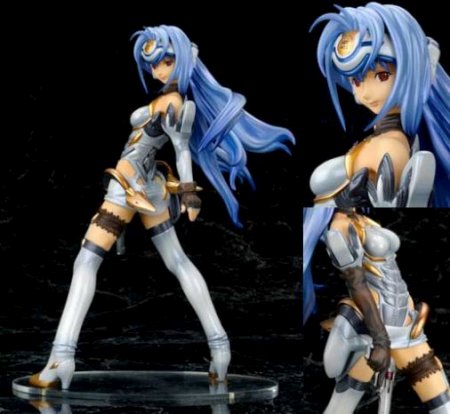 Alter’s KOS-MOS was first released at the end of 2005, but thanks to my laxity in actually ordering one, I missed out on the first release. After cursing my bad luck, I wasted no time in pre-ordering one once the re-release was announced, only to become indecisive as to whether I actually wanted her or not. Fortunately, on arrival, the figure proved good enough to keep, and she has since occupied a place on my shelf.

Despite looking like a little like a bondage queen (we all know Shion created her for HARD YURI), KOS-MOS is a surprisingly attractive and well designed figure in real life, something none of the generic photos really reflect. Although it isn’t clear from this image, KOS-MOS’ hair is actually a translucent blue, whilst the base on my version isn’t the clear round one, but a rectangular white block which is obtrusive enough to dwarf the figure a little.

Overall, a surprisingly good figure with a nice dynamic pose- maybe not one for everyone, but an essential purchase for Xenosaga fans.

HARD GAY Corner: Star Ocean 2
Some may think that SO2 is not the most obvious choice for this feature, but for those who can read between the lines, it is simply bursting with HARD GAY. The main couple of the series are Claude and Dias, both of whom only regard Rena as a way for the two of them to get together. Note how Dias is always interested in Claude’s swordsmanship, not to mention that effeminate voice that says “Claude has advanced” every time he levels up. Unfortunately, Claude will not be HARD GAY enough for Dias until he has advanced to Level 255, but Dias is a patient man.

Meanwhile, both Ashton and Bowman are clearly interested in HARD GAY, but as at least one ending shows, they are forced to get together when Claude refuses to give his heart to anyone but Dias.

In all honesty, I can’t say I believe anyone cares what I think about certain series being licensed, but when has that ever stopped me before?

Mini-rant: OMG it’s licensed!!
And now for a rant about the flip side of licensing; the inevitable outcry from the fans as they worry about their free fansubs drying up because some evil American company wants to get rich off poor destitute anime fans. Now, I’ll admit that it can be annoying to be in the middle of a series as excellent as Chevalier and have regular releases threatened or disrupted, but come on, when have we ever gone without? Even shows as undeservedly high profile as Naruto and Bleach can still be acquired without too much difficulty- yes, many groups will drop it, but you can bet that there will still be an underground release with English subs courtesy of “Anonymous”.

Of course, beyond the basic reaction, we have to have the usual “US companies mess it up” or “the English dub will be crap” complaints, despite the fact that the vast majority of DVDs are uncut and have an accurate subtitled translation- if you don’t like the English dub, don’t listen to it. Contrary to popular belief, including an English dub hardly affects the price that much, and if you’re grubbing around for such thin excuses not to pay for a DVD, it’s hardly likely you’re going to buy it anyway.

In the end, it’s not that I actually care whether people are downloading anime or what they choose to acquire- it’s simply a case of getting annoyed at the repetitive whining every single time a big title is licensed for US release. Just learn to use a site other than AnimeSuki and I guarantee you too can continue your piracy unabated.

In Your Reflection
This week in Tuesday Rumble, IYR has something a little different- the first four of the five ‘Pillar Bishies’ (number five has yet to be revealed), the bishiest males in all anime-dom, and the poster boys for HARD GAY.

First up is Ludwig (Lui) from Meine Liebe, the cool and calm one who may be antisocial, but is the only character with the brains to save the day.

Next on the list is Balmung from .hack; he may have a headband, but his white hair and wings make him more than worthy. It’s a shame that he doesn’t look so good in real life.

Third is Haruka of Tactics- with his dark hair, suit and optional wings, he is surely far worthier than his evil master Kantarou.

The latest addition to the set is Shi Ryuuki from SaiMono; although Seiran and Sakujun almost joined him, in the end I felt that their anime forms let them down. An honourable mention also goes to Ayumu Narumi from Spiral.

Grunty, .hack//: I’m just happy that other people like grunties.

nayuki is evil: yes, she is- she poisoned Makoto and discredited Mai through subliminal messages.

cubis flame: As far as I’m aware, Cubis is a Flash game where you match up groups of three cubes.

ginga+densetsu+weed+plush: People often look for this- do such plushies exist?

you toube, YOU TOUBE: poor you toube, it is nothing compared to the hack audition wave.

Marimite rap: “Hey everyone, let’s get down, with Yumi, Sachiko and the crowd, Marimite rap, for you and me, feel the beat of HARD YURI”.

which utawarerumono character are you te: I am Karura.

fruits basket 136 is good: Isn’t that a matter of opinion?

girls sticking bowling pin in them: This scares me.

whai is climax:…but this is equally terrifying.

mai hime episode 25 script form: Hmm, like I would ever be bothered to do that.

jeremy kyle show: How does my blog get clicked on in a search for a UK chat show?

how can you find out the cycle of the mo: Moon!

pleasure and pain manga: Many manga series are painful.

saber is mine: You’re welcome to her.

In between pages of ads for Spanish sex websites and offers of cheap prescription drugs, there are a few gems of dubious coherence. For obvious reasons, links have been removed and the more tasteless expletives have been edited.

very best idea make rules time!: I really think this should be an Engrish slogan, or maybe even a mecha attack.

This is a top gouge beaten path jogger. The midsole, which is svabodu belarusii urgent cushioning and solidity layer of direction shoes, usually wears out beforehand the outsole.

I love my child .But i still would get angry: Me too…not that I have a child.

hello. it’s a nice day for your ideas and our money: I don’t care about your money, only mine.

very good post from our team: I didn’t know I was anyone’s team.

Stick with the basketball, but keep your options open. Not to jinks you, but you could get hurt: Yes, blogging is much more dangerous than basketball.