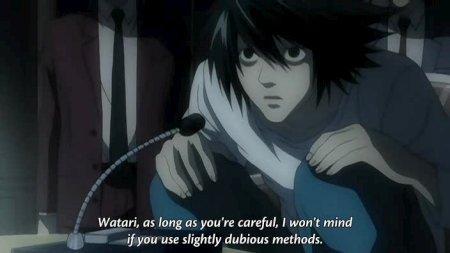 L decides to get experimental in the bedroom.

I never thought I’d say this, but I’m actually beginning to understand the lure of dating sims, and it’s all thanks to Harvest Moon. There’s just such a profound satisfaction in getting your chosen girl up to red heart level (even if all I did was give her flowers every day); in fact, my only disappointment is that you can’t woo all the girls into joining your own personal harem. I know Anton would like nothing better than to have a harem to do the day to day work on the farm whilst he lives the easy life.

Due to my method of writing the parody whilst watching the episode for the first time, I haven’t had time for Shounen Onmyouji 10 this week. It should appear in the next round-up.

Bakumatsu Kikansetsu Irohanihoheto 11: I completely and utterly failed to notice this last week, but now that its existence has been pointed out to me, it has duly been watched. After revealing Nakaiya Form 2 (new hairstyle, same old laugh) and putting some pieces in place for the next arc, this episode sees our troupe (rehearsing for a rather unsubtle play in which they all play themselves) get attacked by mysterious fog warriors who are the series’ equivalent of Avu Kamuu- slow, stupid, and seemingly invincible until their easily exploitable weakness is found. This isn’t one of Iroha’s finest hours, but it will tide me over until the next episode appears.

Busou Renkin 17: Why must Busou Renkin get released so quickly? Whilst Kazuki and Tokiko prepare to hunt for a way to reverse Kazuki’s “victorisation”, the FMA rip-off team (complete with commander who uses fire attacks) arrives to hunt him down. Despite its lack of much to recommend it, I was somewhat relieved at the lack of traumatic images in this episode- right up until the point where Papillon showed up in a swimsuit. ‘Manservice’ may be the lifeblood of the parody, but I fear it may cause me some kind of long term damage.

Death Note 15: Another episode, another bout of ‘Justice Mode’ for Light, who has come to believe he has found an easy way to defeat L, and thus of course must be foiled at every turn lest the series end prematurely. The series is finally heading into more interesting territory, but given its track record, the anime may turn everything into a slow-paced “Justice Light” vs. “Justice L” effort. 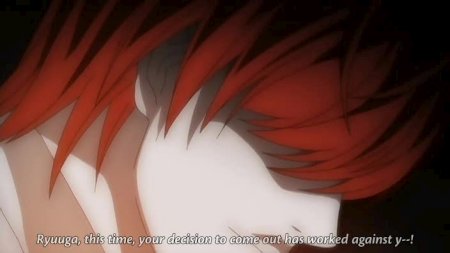 Light decides to take action after L reveals he is HARD GAY.

Gargoyle of the Yoshinagas 8: Another episode of Gargoyle so soon after the last feels like a special treat, and thankfully, this instalment is as enjoyable as ever. Thanks to a mix-up whilst he is being charged up with a new ability, poor Gargoyle accidentally gets taken away by some delivery men, only to end up stuck on a snow-covered mountain with a family who resemble gender-reversed versions of Futaba and Kazumi. As well as giving us a long-awaited look at our leads with their ‘proper’ genders, this proves to be another episode of pure fun- hopefully the next one will appear just as quickly. 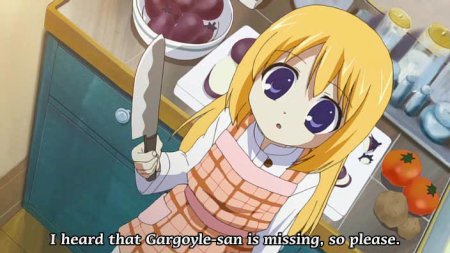 Kanon 17: Although the writers of Kanon seem to have forgotten this point, it’s hard to care about a sick girl who never shows any signs of actually being ill- if anything, she must be rather hardy to endure sitting outside in the freezing cold at all hours of the day and night. Nonetheless, Shiori’s arc must continue onwards, whilst Kaori angsts quietly in the background and longs for more screen time; all we can hope for is that it will be over soon.

Love GetChu! 5: Waiting for a new episode of Love GetChu to appear is hard, but as we’ve come to learn, becoming a voice actress is even more difficult. Even staying in the studio all the time isn’t an option, since our leads have no choice but to compete in the annual Lambda Eight relay race- something which Rinka, for one, is definitely not looking forward to. It doesn’t take a genius to figure out whether Rinka will skip out on the race or show up at the last minute to save the day, but despite the predictability of this series, it remains enjoyable; even if it’s just due to the rarity of release, I do look forward to every episode. 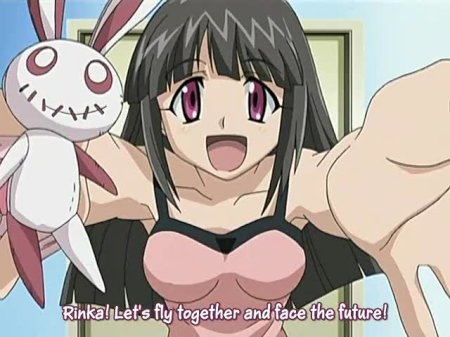 Romance of the Three Kingdoms 40: Now that the episode count is in the forties, the end is in sight, but thankfully, the HARD GAY (and now BI) is still going strong. Since the sun shines out of his every orifice, it is not hard for Zhuge Liang to manipulate Sun Quan and Zhou Yu (who is depressingly average looking here) into agreeing to ally with Liu Bei against Cao Cao, slowly setting the stage for the actual battle of Chi Bi.

Saiunkoku Monogatari 27-9: If an episode of SaiMono is excellent on its own, it becomes that much better when taken as part of a mini-marathon, as this triplet only reaffirms. Shuurei and the others may have won against the mid-bosses of the Sa clan, but with Sakujun now pulling all the strings, their trials are only just beginning- can allies both old and new pull together to outwit his plans? This brief paragraph isn’t really enough to do the events of these episodes justice, but suffice to say that we are continuing to get drawn into the Sa clan arc, and that every minute is more satisfying than the last. Three episodes may have been more than I dared hope for in the space of a week, but it still isn’t enough (yes, I know I say this every time, but that’s the way SaiMono is- once you get some, you just want more).

.hack//4Koma 5: Although it still isn’t greatly humorous, now that 4Koma has settled into it stride, it is becoming lightly amusing instead of just being complete drivel. Unlike previous instalments, this chapter sticks to just the one theme- Kite vs. Haseo, with Atoli and BlackRose in tow. It may be the weakest link in the chain of .hack manga, but at least it’s slowly improving.

.hack//GU+ 6: Pai’s breasts seem to have reached new proportions in this chapter, which sees the aftermath of Endrance’s defeat, Haseo in his usual moody mode, and a significant amount of exposition. Moody Haseo is always irritating, but the rest of the story is interesting enough to keep going with.

.hack//XXXX 2: The addition of ‘mysterious new boy’ has changed the story somewhat, but nonetheless Kite must forge ahead in his attempt to save Orca. This chapter sees a confrontation with Balmung and an angst phase as Kite wonders if he should drag BlackRose and Mistral along with him on his journey- before realising that he cannot possibly manage alone without someone to cast Rip Maen on him.

Bokurano 38: I love Bokurano, but could one chapter possibly be enough? Not really, but since it is better than nothing, the first chapter of Anko’s story must be read, covering a girl who longs for the attention her parents never give her. Meanwhile, knowledge of Zearth has moved into the public domain, and someone has leaked the names of the children- what consequences will this spell for the remaining pilots?

Rose of Versailles 8: Many months after I read the first volume of Rose of Versailles, another chapter is finally available, in which Marie Antoinette meets her beloved Fersen before deciding to take an ill-advised ride on a horse. Apart from being a little faster paced, this is much the same as the animated version, so whilst I’d like to read more, there’s no rush (just as well, as it seems to have taken the best part of four years to translate eight chapters).

Fersen likes to look at the naked bodies of other men.

Spiral 19-22: Concluding the arc that ended the first half of the anime series, chapters 19-20 keep up the pace as Ayumu tries to retrieve the tape, keep Hiyono safe and prevent the explosive device around his neck from exploding- all within the time limit. As always, the series offers an engaging battle of wits, with each side laying traps and counter-traps in an attempt to outwit the other. The next two chapters deal with the aftermath, with Eyes returning to the stage and new character Kanone sure to follow. The next arc looks like it will be more well developed than it was in the anime, so I look forward to reading more (let’s hope that this faster rate of release will continue until the whole series is done).