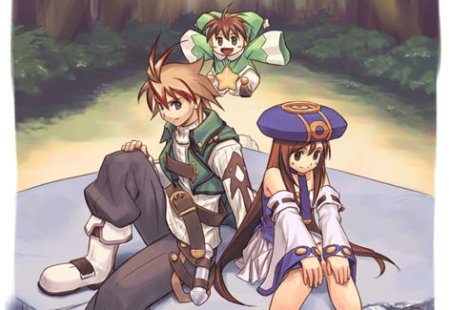 Klein Kiesling is an alchemist- one of an increasingly rare breed of people who make a pact with magical spirits known as Mana in order to manipulate the very elements of nature. Together with his childhood friend and Mana Popo, Klein is on a journey to seek out items related to alchemy, but a chance encounter with a bounty hunter named Lita sees him caught up in a series of events that could determine the fate of the world.

The original Atelier games formed one of those obscure series that never made it out of Japan, but with the adoption of more traditional RPG features in Atelier Iris, English-speaking gamers could finally get a taste of Gust’s alchemic adventures. A mix of the addictive and the frustrating, Atelier Iris is generally an enjoyable game, but one that could use a little fine tuning in certain areas.

The world of Atelier Iris
On the surface of it, Atelier Iris is just another entry in a long line of similar RPGs- your party wanders the field and world map, triggering cut scenes to advance the story and getting into a few too many random battles along the way. Fortunately, there is more to it than that, thanks in no small part to the game’s alchemy system.

As an alchemist, Klein can make pacts with the different elemental Mana he meets in the course of the story, enabling him to use their power in various ways. The first and most obvious use is in the synthesis of Mana items, where Klein gets different Mana spirits to combine different elements to create offensive and defensive items in battle. The raw elements are obtained via elemental extraction- objects in the field, enemies and inventory items can all be deconstructed into their component elements and stored for later use. The cost of turning these elements into items depends on both the item being created and the Mana used- different Mana handle different elements, so it’s in your best interest to find and recruit them all. Fortunately, almost all Mana are either required for the story or not too far off the beaten track, so it shouldn’t be too much of a struggle to locate them. And once you find the rare Aroma Material later in the game, you will even be able to transform some of your Mana into more powerful forms.

As well as lending their power on the synthesis front, Mana can come in handy elsewhere too. After a certain point in the game, it becomes possible for each playable character to equip one Mana- a feature that enables them to boost their stats in fairly predictable ways (Rock enhances defence, Wind boosts speed, etc). Meanwhile, out on the field, most Mana also contribute an ability to the Action Dial- a feature of the game that gives it something of an action and platforming element.

Klein can already put one over on most RPG heroes by being able to jump in the field, but with the Action Dial, he can also tap into a hell of a lot more. As well as the basic yet useful functions of accessing the help menu and checking the current mission, the Action Dial offers Klein the ability to do everything from performing healing and elemental extraction in the field to flying and even transforming into a small rabbit. Unsurprisingly, most of these abilities must be unlocked as the game progresses (usually they are granted by a Mana), and the complete set ranges from minor novelties to actions that are utterly essential if you wish to clear the game. Unfortunately, the flip side of this is that it can make some makes near nightmarish as you try to figure out if you are actually at a dead end, or if you’re supposed to use some clever combination of actions to get yourself to the next map.

Where most RPGs cast your characters as itinerant travellers who pass through town after town of insipid NPCs, Atelier Iris actually does a good job of drawing you into its world. Klein and his allies don’t just stay in the nearest inn- they rent their own house, complete with all saving, healing and synthesis facilities that they need. Better still, the NPCs are more than just two-line characters- certain named characters have their own side stories which slowly unfold every time you meet them, whilst even random generics can adapt and change. For example, when I synthesised an ‘extremely hard’ pie at the bakery in Arcose (more on item synthesis later), all the NPCs complained about how extremely hard it was, but once something new had been synthesised, they switched to talking about that instead. They’re small touches, perhaps, but there’s something nice about walking into a shop and being greeted by a cut scene instead of the standard message box time after time.

That being said, there are times when being caught up in the world to such a degree can feel like a chore. Little more than a twisted tangle of long and winding paths, the world map will ultimately test even the most patient soul by requiring you to practically memorise it, not to mention backtrack to and from various locations over and over again (and often the place you want to go to is several screens into the location, forcing you to experience the high encounter rate of the field maps along the way). Even the teleport system set up mid-game is of limited use as it only lets you travel to a handful of locations, whilst unspecific clues such as “find a cauldron with the right type of soot” given later in the game will really test whether or not the player has been paying attention.

As if that wasn’t enough, Atelier Iris manages to pack in a few more features to keep you occupied- and if you’re feeling a little too daunted to start the game at this point, I must step in with some words of reassurance. In an attempt to avoid information overload, the game does at least space out the introduction of these features- and each time a new system is introduced, the characters take time out to narrate an amusing tutorial that covers the basics nicely. Nonetheless, it is possible to complete the game without really delving into any of the following- although doing so can be quite enjoyable.

If Mana synthesis just doesn’t provide enough item creation fun for you, then your next port of call should be the weapon and item synthesis facilities. Where weapon synthesis is quite a limited function that lets you enhance your weapons at your home base, item synthesis is actually a lot of fun- you bring ingredients to shopkeepers around the world, and they combine them together using a variety of recipes. Triggering certain events will unlock new recipes, whilst substituting an ingredient with a similar item may cause something completely different to be created. The key is to stock up on items from all around the world and experiment to your heart’s content- and once an item has been synthesised, you can also buy it ready made from the shop. The only limitations are that you can only carry a pitiful nine of each item (this goes for Mana items as well), and shops have a strictly limited inventory that mean they may not always have what you need.

One of the most bizarre inclusions in the game, however, must be that of the Growloon- strange round beasts that apparently summon evil spirits if left alone. Weak enough to be defeated with elemental extraction, Growloons appear all over the world, and by destroying them you can own some tidy bonuses. One must still wonder at the point of them, however.

Finally, for obsessive completionists and game addicts, Atelier Iris also has its own stab at item completion- at one location there is a woman who can show your inventory to, and as it gradually fills up, she will unlock art, character info and music for the main menu ‘bonus’ section. How’s that for artificially extending game play time?

Battle
By now, you’re probably reeling with information overload whilst wondering if the game ever actually gets past all these systems and lets you participate in battle. Thankfully, the answer is yes- in fact, world map aside, the encounter rate is a little higher than most will find comfortable.

The basic battle system is pretty standard- characters stand in either the front, middle or back rows and take turns depending on their relative speed stats. Each turn you can attack, use skills and items, defend, switch characters (even dead characters can switch in and out) or run away. The only exception is Klein, who can bring his alchemy onto the field- he can either synthesis an item for use there and then (elements allowing), or use one from stock. You might wonder why you’d ever bother to waste a Mana item in stock when you can make a brand new one on the spot, but there is actually a point to having both commands- ready made Mana items can be used in conjunction with skills to enhance their power and range.

With all the extra healing and attack Mana items available to him, Klein is easily in command of the most useful range of abilities, but because his stats are generally average, he either spends all of his time healing or he gets killed- a death knell for some battles since he is the only one who can heal and revive with skills until Marietta joins later on (there are healing items, but they seem to be generally weak).

It’s not all plain sailing, however, and at a certain point in the game, the difficulty suddenly and unexpectedly ramps up to make things a bit more challenging. Regular enemies become more aggressive and prone to special attacks, whilst bosses start to pose a real problem. The likes of Prism and Elder Virum are particularly hideous, and by the time you’ve claimed victory against them, even the final boss won’t seem quite so hard in comparison.

Unfortunately, for much of the game Lita suffers from a condition where her total mana decreases steadily until she enters a mode where she grows wings. The advantage of this mode is that attack and defence increase, but in exchange her maximum HP is curtailed.

Story
Although Atelier Iris’ story is a little too bogged down in the standard “magic is leaving the world”, “technology was better in the past” and “lone madman is trying to destroy the world” RPG elements, the story still has nice touches. As mentioned before, both NPCs and player characters get a nice level of development, and whilst the story won’t blow anyone away with originality, it works well enough in moving the game along at a decent pace.

Audiovisual
Visually, Atelier Iris goes with the 2D sprites on isometric maps layout that has worked for so many games before- the graphics aren’t particularly advanced, but they suit the tone of the game well. The basic character designs are attractive, and there is a worthy anime sequence before the title screen.

Background music generally sets the atmosphere without being too intrusive, but whilst the battle and boss themes are catchy, as a whole the music doesn’t lend itself to being listened outside the context of the game. As always, the English voice acting can be a bit grating, but for some reason I thrive on the cheesiness of game dubs despite my dislike of them for anime.

Final Thoughts
Thanks to its inventive alchemy system, Atelier Iris manages to distinguish itself from the masses, resulting in a fun and addictive game overall. Yes, there are a few points where you will get lost or frustrated, but if you can overlook these moments you’ll find the game a generally enjoyable experience.

This entry was posted in Games and tagged Atelier, Gust, PS2. Bookmark the permalink.