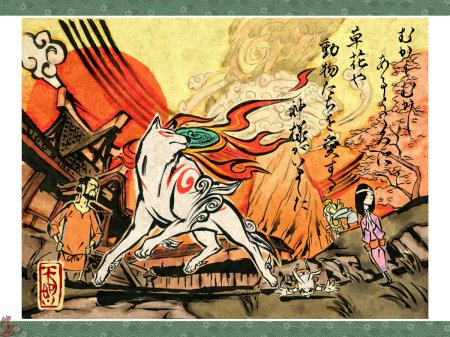 A hundred years ago, the demon Orochi was vanquished through the efforts of the legendary hero Nagi and the white wolf Shiranui, but after a century of peace, Orochi has been released again. With the land of Nippon now cursed by evil, the only hope for salvation lies with the goddess of Amaterasu, who must once again reincarnate herself into the form of a white wolf. But Amaterasu’s powers are much lessened from what they once were, and only with the help of the diminutive artist Issun will she be able to travel the world and regain the abilities of her Celestial Brush.

Before I go any further, there is just one thing I have to say- I adore Okami. The beautiful visual style draws you into a world packed with solid gameplay and an innovative Celestial Brush system that sets this title apart from other action-adventure games. I’ll go into all these aspects in more detail over the course of this review, but suffice to say that in the space of a few weeks, this has quickly become one of my favourite games.

Saving the world from the forces of evil
As Amaterasu, your job is to combat the evil that has spread over the land of Nippon, which in plainer terms means exploring new areas, solving puzzles, assisting NPCs and of course fighting monsters. Along the way, Issun hitches a ride, communicating with other characters in your place and offering generally rather obvious hints to puzzles (the clues as to what you need to do are always highlighted in a bold red font, although sometimes figuring out how to do what it says requires more thought).

On top of the basic gameplay, however, there is the aforementioned Celestial Brush, a concept which apparently was not even originally intended to be in the game. By holding down R1, the world turns to a canvas upon which Amaterasu can draw with her ink and brush, enabling her to effect changes to it- she can change night into day (and vice versa), fix objects that are missing or broken, make flowers bloom, slow down time and even control the elements themselves. Of course, these abilities aren’t all available from the start, but as you find and unlock them over the course of the game, they will become valuable additions to your arsenal- necessary for defeating monsters, solving puzzles and even just exploring the game to its fullest extent. Be careful, however- get too generous with the ink supply and you’ll become naked and vulnerable until it refills (which it will do with time).

As well as using your powers to further exploration, they’ll also come in handy when helping people- be it either as a part of the story or in aid of an optional quest. From the ubiquitous fishing game to simply finding an item that a particular character wants, there is a wealth of tasks that need accomplishing, and whilst some are as simple as going to the nearest shop and investing your hard-earned cash, others can be a bit more involved. For example, due to the lack of a ferry in the capital city, you have to escort people around the town’s canals on a lily-pad- simple enough to do once or twice, but somewhat draining when you realise more and more people are lining up for your services. Another task designed to annoy is the ‘digging game’, in which you must traverse through different layers of rock, guiding an NPC to the bottom whilst ensuring that they do not come to harm and that time does not run out.

At this point, you might be wondering why you would even want to bother appeasing all these people, especially upon learning that it’s not just humans who need your assistance- you’ll also meet animals along the way who expect feeding at your expense. If ‘a good deed is its own reward’ doesn’t cut it for you, fear not, because making everyone and everything happy is also beneficial to you- when things go right, people will offer up Praise, which Amaterasu can use to enhance her health, ink, extra lives and money-carrying capacity.

In the course of your running around, you will inevitably run into battle, at which point both weapons and Celestial Brush techniques become essential for quickly dispatching the enemy. Enemies can be encountered either by touching a floating demon scroll, passing through a demon gate (killing all the enemies within purifies the surrounding land) or just in the course of story, and once battle begins, you will be sealed in by a barrier, limiting your range of movement and forcing you to confront your foes. For non-compulsory battles, it is possible to escape by breaking the barrier, but if you stay you can gain a nice injection of cash into your coffers- and the more quickly and efficiently you dispatch them, the larger your monetary reward at the end.

When it comes to weapons, the selection is typical- you have the good all-rounder in the form of the Reflector, the fast but weak longer-ranged Beads and the strong but slow shorter-ranged Glaives, as well as slots for up to three accessories that can enhance your abilities both on and off the battlefield. Some of these weapon types have special powers, and all can be equipped as either a main weapon to employ their basic attack, or as a sub weapon to enact a secondary attack (as sub weapons, the different bead weapons let you shoot ranged bullets, the reflectors act as a shield, and the glaives let you do a plunge attack). There’s also nothing to stop you using your Celestial Brush against enemies- in fact, this is the only way to defeat some opponents. It’s left up to you to determine exactly how to defeat each enemy type, with the exact method only given to you in the bestiary after you’ve worked it out for yourself.

If the basic techniques aren’t enough for you, however, fear not, because at Onigiri-sensei’s dojo, Amaterasu can also train and learn new techniques- for a price. Whilst most of these techniques fall into standard types such as learning to double-jump or adding another hit to a basic combo, there is also a rather unique and expensive pair of abilities that enable you to ‘do your business’ over the enemy, so to speak. This may seem rather incongruous for a god, but these abilities actually have a useful side effect- when the offending material hits the enemy, their anger crystallises into Demon Fangs, which certain traders will accept in exchange for rare items.

Fortunately, obtaining Demon Fangs isn’t just the province of defecating on your opponent- you will also get one if you manage to pull off a Floral Finisher. In order to do so, you must use a particular Celestial Brush technique just before their lifeless corpse falls to the ground- but determining which technique works is a matter of trial and error.

All these considerations aside, battle isn’t actually all that difficult- some bosses will be drawn out, but provided you have an adequate stock of healing Holy Bones, game over will never be an issue. In fact, since you only ever lose one health unit from falling off ledges, drowning and such, it is very difficult to ever lose a life in the game (although if you do, a filled Astral Pouch will revive you). In some ways, it is refreshing for a game of this genre to be so easy, although there are still some frustrating ledge jumping sections designed to put you through your paces.

Naturally, no game of this type would be complete without sidequests and extras to collect, and Okami is certainly well-endowed in this department. From collecting well-hidden stray beads and digging up clovers (the logo of creators Clover Studio) to slaying wanted monsters that only come out at night, there is plenty to do to extend your time in the game’s world. And when you decide you’re done and want to get it all over with by facing the final boss, there’s the option to go back to the beginning with a New Game+, in which everything except ultimate weapons and Celestial Brush techniques are carried over. And if you scored particularly well by the time you reach endgame, you’ll unlock various extras such as art and sound galleries, and even ‘karmic transformers’ that change the way Amaterasu looks.

Story
On the surface of it, Okami is yet another struggle between the forces of good and the powerful, ugly servants of the Dark Lord (creatively named Yami), but happily, there is more to it than that. In keeping with the tone and feel of the game, Okami is packed with references to Japanese mythology, brought to life through a collection of eccentric and memorable characters.

Audiovisual
As I mentioned at the very start, Okami’s visuals are one of its main draws, for never before has a game looked this good. After abandoning impractical photorealism, the creators of the game went for a look based entirely on traditional Japanese woodcut and brush painting, creating a beautiful world that I a joy to play in. Leaves fall and plants grow as Amaterasu runs and jumps around, trees and flowers bloom in a rush that purifies the land from evil- all in all it is beautiful land whose very appearance makes you want to keep playing.

Sound effects and background music are also in keeping with the tone and atmosphere of the game, using period-themed pieces that tranquil for exploration and more energetic when battle is called for. The only complaint that could be levelled at the audio side of the game is the character ‘voices’, which are computer-generated Bill and Ben style buzzing- personally, I don’t mind them when I’m in control, but they can be irritating when you’re listening to someone else playing the game.

Final Thoughts
Trite as it may sound to say this, getting into Okami is not just about playing a game- it is more akin to immersing yourself in a beautiful and atmospheric alternate world. If you have yet to be won over by its spell, then be sure to add it to your purchase list- you won’t regret it.

This entry was posted in Games and tagged PS2. Bookmark the permalink.