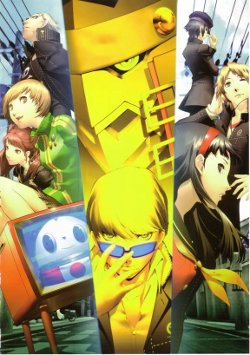 With his parents away for a year, the protagonist transfers to the sleepy town of Inaba for his sophomore year in high school. But what should be a quiet life with his uncle Dojima and young cousin Nanako quickly takes a more sinister turn when the town is rocked by a series of murders. Could the murders be linked to the mysterious Midnight Channel, a link to a dark world within the television? In order to unravel the mystery, the protagonist and his friends must explore this TV world and unlock the power of their inner selves- the Persona.

Following in the footsteps of its predecessor, Persona 4 once again sees you playing a year in the life of a high school student who must juggle not only school work and a social life, but also regular trips to a world crawling with monsters. With some refinement and reworking of the Persona 3 formula, Persona 4 manages to essentially duplicate the success of the previous game, whilst also managing to establish its own unique style.

As with Persona 3, the game takes place over a year of in-game time, with each day being divided into several sections. When you’re not attending classes, your time can be spent forging Social Links by attending clubs, doing part-time work or hanging out with friends, or fighting monsters and clearing dungeons in the TV world. Unfortunately, rather than spacing things out more evenly, time management has become even harsher in Persona 4; dungeon-exploration has now been moved to the after school phase, which is also the time of day when most Social Links are available. Worse yet, once you’ve been in the TV world all afternoon, your character is too tired to go out in the evening, effectively preventing you from making any Social Link progress for that entire day.

In the normal world, the protagonist is characterised by various attributes- Knowledge, Diligence, Courage, Understanding and Expression. Levelling these up through study, reading and part-time work is the key to convincing party members and NPCs to build Social Links with you. As with Persona 3, levelling up Social Links through is both important to the story and key to the creation of strong Personas.

As if you didn’t have enough to fill your time, Persona 4 also boasts some extra features to keep you busy for your year in Inaba. The almost ubiquitous fishing mini-game makes itself known here, and is one of the few things you can leave your house to do at night. As you might expect, fish can be exchanged for a selection of rare items and equipment, with the selection on offer changing after each month of game time. For the lazier gamer, other rare items can be bought by ordering from the weekly TV shopping program- and no, I’m not joking about that.

In addition, in place of Elizabeth’s requests in Person 3, this time around, various NPCs will ask you for items that can be found within the TV world. There’s no time limit on these quests, and no penalty for ignoring them, but the rewards are often worth the effort.

Unlike Persona 3, which put its all into a single, mighty dungeon, Persona 4 is divided into several different worlds, each with a unique look. Within each dungeon, your task is to defeat Shadows and rescue the person who has been abducted into the TV world, all within a few weeks of game time. Fail, and it’s game over- although you will get the chance to go back one week and try again. Fortunately, it’s never too hard to clear a dungeon well within the time limit, which is just as well given that you also need that precious after school and evening time for raising your attributes and strengthening your Social Links.

Each dungeon has a set number of floors with a randomly generated layout and the usual abundance of Shadows. Unlike Persona 3, if you leave the dungeon, you can return to the entrance of the floor you were just exploring, which lessens the feeling that you have to rush through each floor as quickly as possible before a random enemy wipes you out with a simple Hama or Mudo spell. Escaping a dungeon can be done with the item Go Ho-M, the spell Traesto, or by teleporting out from a Save Point. Characters don’t experience fatigue the way they did in Persona 3, but in order to balance that, you no longer recover all your HP and SP upon returning to the TV World entrance. You can recruit a fox who will heal your party for an extortionate price (discounted as you build up your Social Link with it), but even so, it’s unlikely that you’ll be able to do excessive levelling up in a single visit to TV World.

The battle system will immediately be familiar to Persona 3 veterans, although this time around there have been some welcome enhancements. Although the main character remains the only one who can switch Personas and decide battle tactics, it is now possible to directly control all other party members. Naturally, this makes battle strategy a lot easier, since you’re no longer hoping for the best each time an ally’s turn comes up.

Those who suffered game over at the hands of a minor enemy who just happened to target your main character with a killing blow will also be glad to know that the system is now a little more forgiving. As you level up your Social Links with other party members, they will become willing to perform support actions in battle, such as following up a critical attack, recovering the status of another character, or, most importantly, taking a death blow in your place.

As in all SMT games, elemental strengths and weaknesses play an important part in the flow of battle. Of course, as in those other games, it is possible for a weak enemy to get the jump on you, target your weakness and thus get enough turns to finish you off, but that’s only to be expected. More importantly, Persona 4 has the guard command that its predecessor lacked, and when a character is guarding, they are no longer susceptible to their weakness. Unfortunately, for all that Persona 4 gives in this department, it also takes away, for now the Analysis ability no longer tells you an enemy’s weakness in advance, meaning you have to discover it by trial and error.

Given that this is a Persona game, it should come as no surprise that the main character has the ability to command multiple Personas. As before, Personas can be obtained after battle during ‘Shuffle Time’ or fused in the Velvet Room, with a wide variety of familiar SMT demons making a return appearance.

Protagonist: Unlike the protagonist of Persona 3, who could equip any weapon that took his fancy, the hero of Persona 4 is limited to swords alone. When it comes to Personas, however, the choice is yours- pick up a varied enough skillset and he’ll be able to handle pretty much anything.

Yosuke Hanamura: A dual wielder of twin kunai, Yosuke has a smattering of physical skills and a mastery of wind magic. As the first ally to join you, he’s incredibly useful early on and remains a solid party member throughout the game.

Chie Satonaka: Although she also has a basic command of ice magic, Chie’s true role is as a physical attacker, with the aid of her flying kicks and luchador Persona. She manages to hold her own early in the game, but later on her lack of magical skills does put her at a severe disadvantage.

Yukiko Amagi: The elegant master of fire and healing magic, Yukiko deserves a place on any team. Her physical attack may not be up to much, but with her high SP, she’ll rarely need to fall back on it, and can act as both offence and support thanks to her magical repertoire.

Teddie: Although he acts as support at first, Teddie eventually gets to join the party, where he proves adept at both healing and ice magic. He makes a nice complement to Yukiko, and is also far too cute to be left on the bench.

Kanji Tatsumi: A supposed delinquent with a warm heart and a secret love of sewing, Kanji is a strong physical attacker with a sideline in lightning magic. He’s a decent enough party member but doesn’t quite match the Yosuke/Yukiko/Teddie combo.

Naoto Shirogane: The final character to join, Naoto specialises in Light, Dark and Almighty attacks, although the latter start off quite weak. Unfortunately, since Light and Dark always have a probability of missing, this means that Naoto doesn’t really have a reliable magic attack to bring out. Certainly the distribution of abilities here seems less favourable than it did in Persona 3.

Rise Kujikawa (support): Although just as annoying as Fuuka, Rise is slightly less useful in terms of her Analysis abilities. At least she looks nice in a swimsuit.

Although not as dark in tone as its predecessor, Persona 4 is still quite a convoluted tale, weaving together the issues and insecurities of enemies and allies alike. Although there are a few too many twists and turns to make for a solid, coherent narrative, at least the characters are likeable enough to be sympathetic. Be careful, though, as one wrong move at the end of December can see you catapulted straight into the bad ending before you even realise it.

Where Persona 3 was dark blue and violet, film noir mixed with comic book, Persona 4 takes on a completely different look and feel. The predominant colour of the menus is a bright, blinding yellow, whilst the sleepy town of Inaba has a very countrified feel. Gekkoukan High School may have had a modern feel with its neutral colours, but in contrast Yasogami High is more retro with its wooden desks and flooring. It’s good that the game has managed to forge its own distinct identity, but as a matter of personal preference, I’d rather be in the world of Persona 3.

Music is once again composed by the talented Shoji Meguro, who manages to retain his signature style whilst infusing this new set of tracks with their own unique flavour. Since the game comes with a soundtrack CD, you’re free to revisit the best of the game’s music at any time.

Although it doesn’t quite match up to Persona 3 in terms of style and story, Persona 4 still has the trademark addictive qualities of any Shin Megami Tensei, and will provide plenty of hours of gameplay for RPG fans. A recommended purchase.

This entry was posted in Games and tagged RPG, SMT. Bookmark the permalink.

One Response to Persona 4