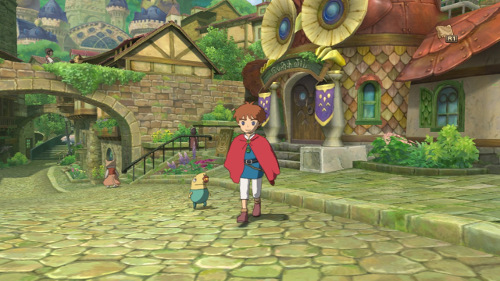 I love Ni No Kuni. It’s a fantastic game, a fairytale story animated by Studio Ghibli that never fails to enchant from start to finish. It’s a game that I can spend tens of hours playing without really noticing the passage of time, and one that never fails to delight – all of which means I’m very much looking forward to Ni No Kuni 2. That being said, Ni No Kuni wasn’t without its flaws. If the sequel really wants to wow and amaze me, without having those same little niggles, these are the areas where it will really need to get its act together.

I don’t know about you, but I won the vast majority of boss battles in Ni No Kuni using Oliver alone, with Esther and Swaine lying dead on the floor for most of the fight. Yes, there are tactical options, and the “All-Out Attack/Defence” commands, but it just isn’t enough. Set your comrades to heal, and they waste all their MP on casting buffs. Let them do what they like, and they invariably drain all their MP with alarming rapidity, and then send weak familiars in to physically attack the enemy. Often it seems more like luck than judgement as to whether they’ll even summon the best familiar for the situation – and when they’re alive, they’re either useless at collecting glims when they need them, or steal them away from Oliver’s more deserving grasp.

In fact, during the boss battles where I did only have Oliver, it somehow seemed easier. I wasn’t wasting my time keeping my comrades alive, or having to worry about whether they were attacking or defending. I could do my own thing, and whilst my strategies might have taken more time, they usually proved effective in the end.

When a control system is good, you shouldn’t even notice it. When it’s bad, it’s a constant niggle. Unfortunately, Ni No Kuni just doesn’t get it quite right.

The battlefield is the biggest offender here. Say you see a boss charging its attack. You want to defend, but by the time you’ve scrolled round the command list looking for the defend option, chances are a lengthy attack animation has already begun. Not only that, but you have to separately tell your allies to defend in addition to selecting defence for yourself. Good luck getting all that done in the few frames you have whilst the enemy charges its attack. Why isn’t there a hotkey that you can instantly hammer when you need everyone to defend?

And then there are spells. You might know that your adversary is weak against Arrow of Light, but every time you want to cast it, you have to select ‘Spells’, scroll down to ‘Arrow of Light’, select the target and then wait for the casting animation. Heaven forbid that you accidentally select the wrong spell, because when you cancel back out of it, the entire command is cancelled and you have to start over. The Tales games let you set shortcuts to the artes you want to use most, and something similar here would have been much slicker.

Setting tactics for your computer controlled allies is also less than ideal. To even access the tactics menu, you have to be in battle – admittedly, not a problem unique to this game – and you have to be in control of a human character. Before your allies wade in, you then have to navigate to the tactics menu as quickly as possible and switch their instructions – this is particularly important when you need to cast a specific spell on a weak enemy (more on this later), and you don’t want your computer-controlled allies killing them in a single blow.

Then there’s exploration. Being able to fly around the world on a dragon should be the most awesome thing ever, right? Well, apart from the general slowness of it, it can be a bit of a pain. Whilst on the dragon’s back, you can only see the overall world map, which means that if you’re looking for something specific, you have to land to check either the more detailed map or even open the menu. Then, when you see that you’re not quite in the right place, you have to summon your dragon again, fly over to the next landmark, and land again. It’s just plain frustrating – there has to be a better way.

Finally, there’s the menu screen. The ‘Journal’ section shows you all your quests, and each time you open it, you have to press Select to dismiss the quests you’ve already completed so that you can see the ones you’re actually interested in. Worse still is the Wizard’s Companion – whilst being a fantastically useful trove of information, it’s a real pain in the backside to try to navigate to it.

After a certain point, a big part of Ni No Kuni is the fact that you can catch your own familiars. Great, you think – I can finally add all those cats and owls I’ve been fighting to my team. And that guy over there has just asked me for some familiars for a quest, so I’d better get those too. I’ll find some in the wild, lure them to my side, and be done in no time.

Except it’s not that simple. We know that catching monsters can be straightforward – games like Shin Megami Tensei and Pokemon rely on it. But in Ni No Kuni, it becomes a tedious game of chance. When you defeat a particular enemy, there’s a fixed probability that you’ll be able to tame it – and that probability is never high. But that’s not the whole story – once you see that a monster can be tamed, you have to switch to Esther and have her play the harp until her soothing song lures the enemy to your side. If Esther is incapacitated, then that’s your chance out of the window. So, you may want a new Shonky Honker or to capture a Lotus Bubbud for a quest, but it’s likely that you’ll have to fight a fair few of them just to get the chance to lure one to your side. When you add in the fact that enemies will start running away from you once you’re a higher level than they are, and it can be difficult to get the familiars you crave.

Yes, you can disguise yourself with Veil, but this quickly becomes costly, given that it’s dispelled after every battle, and costs 9-10MP per cast. Why isn’t there a spell like Enemy Lure at the very least, to help you find the opponents you need? Or a spell called Tame that you can cast whenever you want to have a go at obtaining a familiar?

At the start of Ni No Kuni, you can bumble along quite merrily for a few hours, learning the battle system and not doing too badly. And then, suddenly, it gets hard. Shin Megami Tensei hard. Nintendo hard. Bosses start wiping the floor with you, forcing you to adopt a slow and steady approach. Regular enemies often wipe you out, because your allies have such terrible AI. I’m all for a challenge, but the way Ni No Kuni can suddenly floor you by ramping up the difficulty level is not always welcome.

There are lots of sidequests in Ni No Kuni, from the trivial to the tedious. As someone who plays a lot of JRPGs, I’m no stranger to having to defeat specific enemies or collect certain items, but Ni No Kuni seems determined to take it a step further. There are quests where you have to not only defeat a specific type of enemy, but you have to do it with a certain elemental spell or status effect to get them to drop the item that you need. Many of the problems described above come into play here. The enemies might be weaker than you, so you have to sneak up on them before they run away and disappear off the map. If your allies aren’t set to do nothing, they may well kill those enemies before you get a chance to cast the correct spell. Even the guy who keeps losing his diary doesn’t inspire quite the same level of frustration.