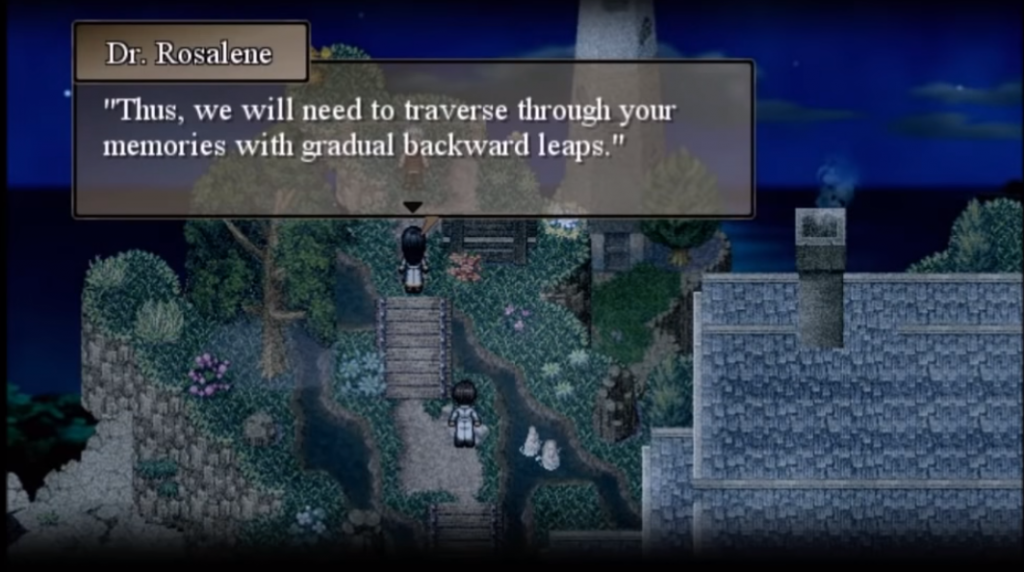 SigCorp is a company with a remarkable technology. For people on their deathbeds, they promise the fulfilment of any wish – thanks to a machine that lets its trained operators work backwards through the memories of a client, allowing their mind to work up a new narrative based on their desires. Right before they die, the client’s memories are rewritten, allowing them to briefly believe in the happier life they never actually got to lead.

Doctor Neil Watts and Doctor Eva Rosalene are SigCorp employees who work together on granting such wishes to their clients. In To The Moon, they traverse the memories of John Wyles, an old man who wanted to become an astronaut and visit the moon, but who never got the chance to do so. Later, in Finding Paradise, Neil and Eva visit Colin Reeds, a retired airline pilot. Colin’s wish proves to be particularly challenging, for he doesn’t want anything much changed in his life, but he still wants things to be indefinably ‘better’, somehow. Are Neil and Eva up to the challenge of delivering what he wants?

It’s been some twelve years since I last played with RPG Maker XP myself, but my enduring memory of the experience was of the huge mismatch between my grandiose visions for the games I wanted to make, and my ability to use the game engine to realise those visions. I got rather good at making sprites and animations, but never quite rose to mastering all the things needed to make an all-round decent game.

So it is that I not only feel a surge of nostalgia when I play a game made with RPG Maker XP, but I remain impressed at what some people have been able to do with the game engine. Such is the case with To The Moon and Finding Paradise.

Despite the engine, these games are not RPGs. Between them, they boast a grand total of two RPG-style battles, one of which can be lost with only minimal changes to the story, and one which can be skipped entirely. There’s also a sprinkling of mini-games and action game type sequences, but for the most part, gameplay is quite sedate. As Doctors Rosalene and Watts, most of what you do is wandering around inside the memories of your clients, searching the environment for items and scenes that generate ‘memory orbs’. Collect enough, and you can solve a puzzle to jump to the next memory. In To The Moon, the puzzle in question is a tile-flipping game, which Finding Paradise goes with a take on the classic match-3. 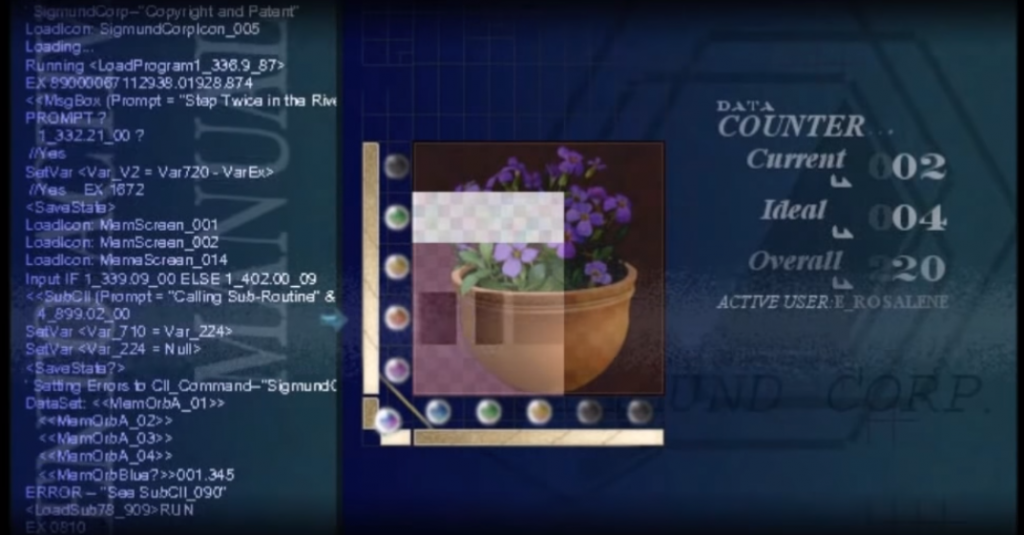 To The Moon’s tile flipping puzzle. Tiles can be flipped along rows, columns, or along one diagonal. 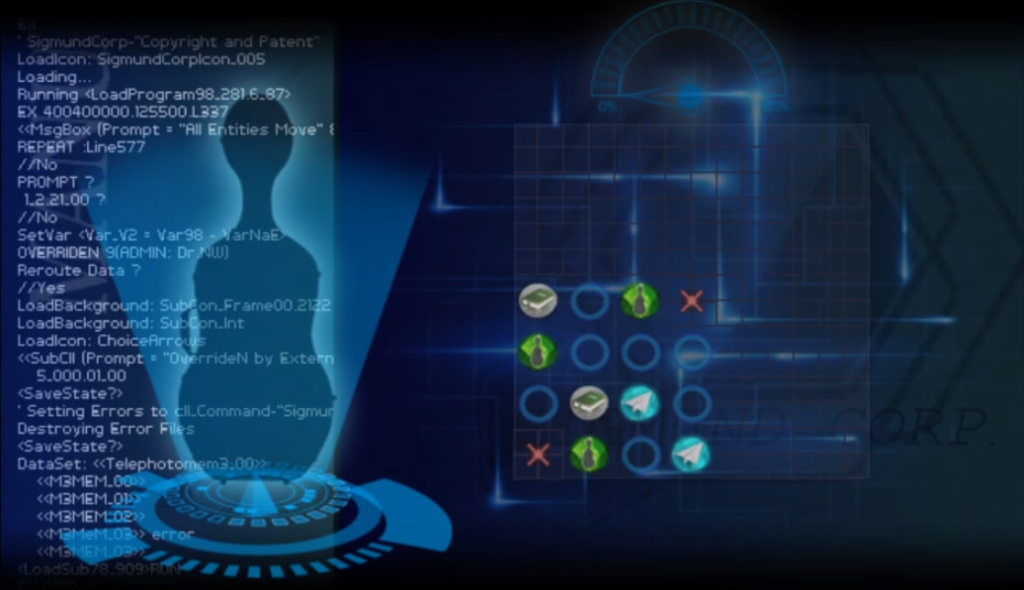 Finding Paradise’s match-3 game requires shifting rows and columns of symbols, whilst being aware of blockers and redirect arrows.

For the most part, there’s a good balance between gameplay and story in both games, so that even though it’s easy to pick up and play for a few minutes, you’ll find yourself wanting to carry on for just a bit longer. My only criticism would be that sometimes the layouts of the environments don’t always make it clear where to go, or which tiles you can walk on – since the maps aren’t huge, it’s a minor niggle, but it’s one that’s definitely there.

I’ll go into the story in more detail in the spoiler section below, but suffice to say that both games are strong on that front. Each instalment takes a different approach to the base premise – To The Moon favours a more straightforward “making dreams come true” approach, whilst Finding Paradise is a little more cryptic. In the latter case, Colin doesn’t really know what he wants – is it for all his little regrets to be erased and replaced with the most perfect version of the life he led, or is it just about accepting the reality of his past?

As well as their individual stories, the two games – plus short DLC episodes – also set up some ongoing threads about Doctors Watts and Rosalene, and the nature of their memory-altering work. Again, I’ll hold off on the specifics until the spoiler section, but suffice to say that there’s enough of a mystery to make players eager for the next game in the series. Given that there was a six-year gap between the first two games, however, we might be waiting a while for whatever comes next.

Visually, both games are instantly recognisable as RMXP products, but they make good use of both standard RPG Maker assets, open source, and custom graphics. I recognised a lot of the tiles from my own work with RMXP, but could appreciate the work that had gone into creating the environments – it’s very easy to make a bad RMXP map, but a lot more effort to make something that looks even half decent. By far and away the best aspect of the graphics, however – and also the one that is unique to this game series – are the sprites used for the SigCorp scientists.

Background music is strong, and complements the game well – especially some of the more melancholy tracks. Whilst I didn’t quite feel inspired enough to purchase the game soundtracks for standalone listening, I certainly enjoyed the music within the context of the games.

(Not quite) Final Thoughts: To The Moon and Finding Paradise might not be the most involved and complex of games, but their novel premise and engaging storyline ensures that both are worth a look. Since both are reasonably priced and don’t take too long to complete, they’re perfect for a brief burst of thoughtful gaming with real emotional impact.

In this section, we’ll take a bit of a deeper dive into the two games and their accompanying DLC. As well as analysing the thoughts and motivations of the people whose memories Neil and Eva traverse, we will of course want to look at the unresolved threads building across the series so far. This section will be highly spoilerific, so only read on if you’ve already played the games.

Creator Kan Gao tweets “To the Moon was about seeking fantasy from reality, whereas Finding Paradise is about seeking reality from fantasy. Two sides of the same coin.” By examining the stories presented in both games, we can unpack that statement a little more.

Let’s start with To The Moon. The client, John Wyles, wants memories of a life where he became a lunar astronaut, even though he can’t quite remember where this ambition came from. In fact, on their first pass through his memories, Neil and Eva can’t even find a past version of John who has any desire to go to the moon. What exactly is going on?

It turn out that John’s desires are deeply tied up with his complicated relationship with his wife, River. Although never quite stated outright, it is heavily implied that River is on the autistic spectrum, and over the years it’s clear that John has failed to connect with the way his wife communicates her feelings. It’s a marriage that should have been happy, but in actual fact there’s always been an awkward distance between them.

As Neil and Eva go further back, however, it transpires that some of John had lost some of his earliest memories – including his first meeting with River – after being dosed with beta blockers to help him forget the tragic death of his twin brother Joey (a quick Google search isn’t enough to convince me this is scientifically plausible, but we’ll go with it for now). It was during this meeting that John and River promised to meet again one day on the moon, but by the time they did meet again, he had already forgotten all about it. River patiently spent years trying to prompt John to remember, but unfortunately the message never quite got through.

In the end, giving John the memory of his ‘best life’ requires two changes to his memories. First, Joey is saved, ensuring that John retains his memories and gets to grow up alongside his twin brother. Second, his reunion with River is postponed from high school until the day they both enrol in the space program. This point might seem less important, but it turns out to be key in giving John the time to grow and mature into the kind of empathetic person who can better communicate with River. With these changes made, the life John remembers on his deathbed is one of both a fulfilling career, and a happy marriage.

Having tackled a story about wish fulfilment in To The Moon, Finding Paradise takes a wholly different tack. Here, Eva and Neil have a rather vague brief to fulfil – Colin knows he wants something to be different, but he isn’t quite sure what. He’s lived a happy life, and loves his wife and son, so what can the two doctors do that would make things any better?

As we explore Colin’s memories, regrets do begin to pop up here and there. The time he botched the landing on his final flight as an airline pilot. The typo made by the sky-writer he hired to propose to his wife. For a time, it looks as if the thrust of the game might be to correct these small imperfections, but in fact, there’s something deeper going on.

Colin’s early memories are dominated by the time he spent with his friend and neighbour, a girl named Faye. And yet, at some point in his past, Faye just stops showing up. What could have happened to these previously inseparable friends?

Eventually, the mystery is revealed. Faye was never a real person, but was in fact an imaginary friend that Colin relied upon for years. It was only when he was secure in his job, and in a relationship with the woman who would become his wife, that he was finally able to let go of Faye. But the promise he made to her to lead a rich and fulfilling life hangs heavily upon present day Colin – much as he would like to say goodbye to her before he dies, is the life he lived really good enough?

The answer, as it turns out, is not to go through Colin’s past fixing up all of his regrets and mistakes, but to remove just one thing from his memories – the existence of SigCorp. Freed from the possibility of being able to write perfect versions of his experiences, Colin is finally able to accept that the life he actually lived is good enough, both for himself, and for the Faye-persona that still lives inside him.

What’s up with Dr Watts?

Alongside the main stories of the two games, it’s clear that there’s something else going on with Dr Neil Watts – but what, exactly? Let’s look at what we have so far.

We can’t yet know what the truth of the matter is, but theories are already floating around.

Whatever the situation, we can be sure of one thing – Neil is trying to push the capabilities of the memory machine beyond its original intention. It may well be to save the life of a specific individual, pure scientific curiosity, or something in between. Perhaps Neil is working towards something potentially morally dubious, but which could serve a greater good. Could one save the consciousness of a dying person? Could something like the Faye-persona represent the next evolution of memory manipulation? Could memories be changed for the living as well as the dying? For now, we can only speculate.