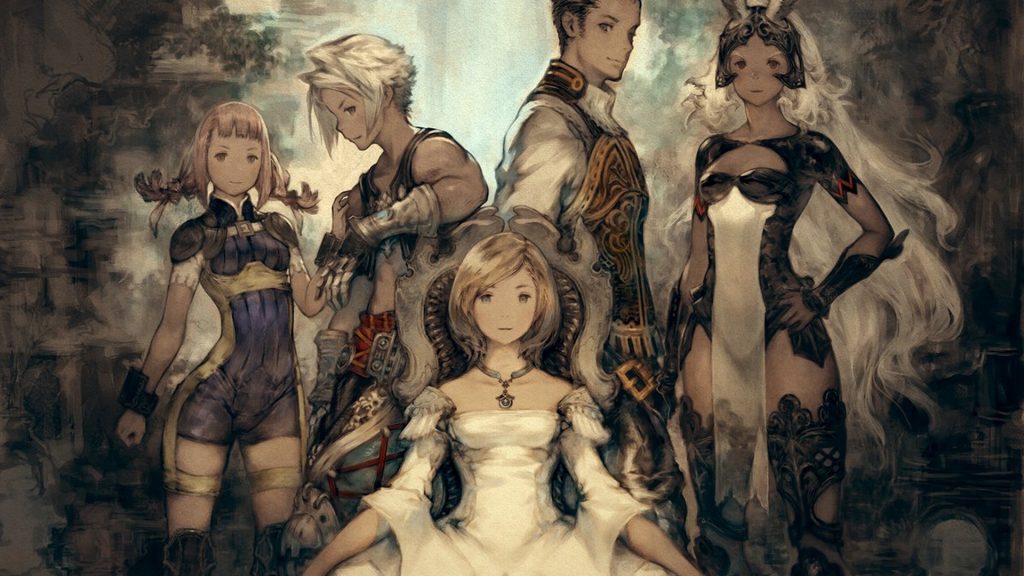 Back in the day, my relationship with the original PS2 release of Final Fantasy XII was as brief as it was disappointing. Long gone were the days when the release of each new FF game was cause for anticipation and excitement. Also gone were turn-based battles and random encounters, in favour of a weird hybrid of real-time and menu-base encounters. It all felt very painful and jarring, and I gave up after struggling through to the Garuda boss without collecting the berries needed to weaken him.

By the time I was ready to return to the game some twelve years later, an HD remaster – The Zodiac Age – had been released. I played the PS4 version of The Zodiac Age, which lacks a couple of extra features added for the Switch and XBox One releases. Nonetheless, enough has changed to make the experience a lot more enjoyable.

The Zodiac Age is essentially an HD version of an earlier FFXII remake that was only released in Japan. Many of these new features actually derive from that version of the game.

And now onto the game as a whole…

Although not a true open world, FFXII does a very good job of giving that impression. Areas are large and expansive, allowing for a true feeling of exploration – the very opposite of FFXIII’s cramped corridors. There are optional paths and secret areas aplenty, and a general feeling of a large world with much to see and explore. The world also looks pretty good in HD, with a wide variety of locations occupied by a range of different humanoid races.

You won’t get access to your own airship until the end of the game – and besides, it only takes you to a subset of locations – but once you can get your hands on a supply of Teleport Stones, you will be able to travel freely between the orange save crystals found in every location.

The Nobuo Uematsu era set the bar high not just for Final Fantasy, but for JRPGs in general – although some of that will of course be as much due to my nostalgia as to the quality of the music itself. With that in mind, FFXII had a lot to live up to.

At first, I was certain that the FFXII soundtrack could never reach these heights, and didn’t pay it too much attention. Yet, as I played, I found the music persistently invading my consciousness, becoming a familiar earworm even after I switched off the console. Hitoshi Sakimoto has done a great job of composing tracks that perfectly complement the grand, sweeping scale of the game world, adding an extra dimension to the experience. Some of my favourites include the catchy Rabanastre town theme, and the epic stylings of field themes such as that of the Tchita Uplands.

The Pretty Decent, If Not Outstanding

Just like the characters of FFXII, I too have gone on a journey – from hating the FFXII battle system to actually finding it not too bad. The key is to take a step back – unlike the old turn-based systems, where you were in charge of your character’s every move, here, setting up strategies is more important. And whilst this approach didn’t go down too well in the subsequent FFXIII, it actually works pretty well here.

The key to battle is to set up so-called “Gambits” – simple conditional statements that your characters will execute automatically in battle. For example, you can set a Gambit to cast fire spells only on enemies that are weak to fire, or cure spells on allies whose health falls below a certain level. However, at any time you can bring up the menu to issue a direct command, such as if you suddenly need to use an item or access a particular skill. Once you get your Gambits set up to your satisfaction, battle usually proceeds smoothly – you can leave your characters to automatically deal with weaker monsters that are beneath your notice, but take more of an active role in directing events during tougher boss battles.

One thing that is sadly missing from the PS4 version, but present on Switch and Xbox One, is the ability to store multiple Gambit sets, such that you can have a generic set of Gambits for ‘everyday use’, and switch over something more specialised for particular bosses. In the PS4 case, you do sometimes find yourself needing to customise your Gambits to beat a tough boss, and then having to manually revert back to your usual schema once the battle is over.

It’s worth noting that, as JRPGs go, FFXII is not particularly challenging overall – investing in halfway decent weapons and armour and beating the odd optional monster for EXP is enough to keep the main game pretty straightforward. In fact, if you choose to grind in Trial Mode, then the rewards that carry over will completely break the main game, so don’t do this if you want more of a challenge. There are, however, some tough optional bosses for those who really want to go the distance.

Alongside conventional levelling up, FFXII characters develop by using “License Points” earned in battle to unlock squares on the License Board. Although not as comprehensive and all-encompassing as the FFX Sphere Grid, the License Board covers various aspects of character development, unlocking the ability to equip particular weapons and armour, the addition of various special skills, and a range of stat enhancements. Note, however, that it’s not enough to have a license for a particular skill in order to be able to use it – you also have to obtain that skill from either a shop or a treasure chest. Thus you can end up with licenses for skills you don’t own yet, or skills which no character is yet qualified to wield.

In the original FFXII, there was one huge license board which all characters had access to, with the idea being that the player would develop them all in different directions. Of course, what actually happened was that players just developed all characters identically along the optimal route, and the whole process was extremely dull. The Zodiac Age mixes things up a bit by offering twelve different license boards, each corresponding to a different, more specialised, job. There are certain jobs which suit particular characters, but overall it allows for a lot more character individuality.

No self-respecting Final Fantasy title should skimp on the sidequests – those optional missions that let you earn special rewards and find out a bit more about the game lore. At first, FFXII’s sidequests seem purely dominated by hunting down optional bosses, but as you explore the world, you do find a bit more variety. For example, there’s a quest to find runaway cockatrices across the world and return them to their home, and one to deliver a letter to all the stewards working across the different airship routes. It’s also worth noting that only five of the game’s thirteen Espers are obtained during the main story – the other eight are optional.

While I did enjoy spending time completing a fair number of these sidequests, there does inevitably come a point where finishing them all up requires no small amount of effort. Yes, this is a feature of pretty much every JRPG out there, but the world of FFXII was not so compelling to make me want to spend hours chipping away at the HP of the hardest bosses.

FFXII’s story starts off promisingly enough. The action centres on Dalamasca, a small country located between two warring empires. In the game’s prologue, Dalmasca’s king is killed and the country is annexed by the Archadian Empire. Skip ahead two years, and a loosely connected group of heroes end up accompanying the king’s daughter, Ashe, on her journey to reclaim her throne.

What follows is not a complex story of war and politics, but rather a long quest that boils down to trying to find some magical artefacts that might cement Ashe’s power. The story feels quite short, and often clips along at a pace that is too fast for its own good – twists happen too quickly to register with their intended emotional impact, making it hard to care.

The true main character of FFXII is a point that’s somewhat up for debate. Really, it should be Ashe, the deposed princess looking to regain her throne. Just as FFX was Yuna’s journey (even if she wasn’t technically the main character), so FFXII is Ashe’s- and although the journey itself is lacklustre, it does force Ashe to choose between embracing an overwhelming power granted by controlling, godlike beings, or forging a new, independent path for humanity. Ultimately, are the revenge and destruction offered by the former path really worth it, and what kind of person would she become if she chose that future?

In fact, the original main character of FFXII was not to be Ashe, but her loyal knight Captain Basch. Basch was framed for killing the king – a deed actually committed by his identical twin brother – but is nonetheless able to gain the trust of the other characters remarkably quickly. He then settles into the role of a stalwart but unexciting support, most notable for his potential to become the party’s main tank and damage dealer. He and his brother – one of the main villains – do have something of a tragic origin story involving the destruction of their homeland, but this is never explored enough to make anyone care.

However, since Basch is a positively ancient 36 years old (coincidentally, also my age at the time of writing), it was feared that Japanese players would reject such an old man as a protagonist. Relatively late in development, two more characters were brought in – teenaged Vaan and his best friend Penelo. Vaan is quite possibly the blandest character ever to grace a Final Fantasy game – a victim of circumstance, he gets caught up in events and tags along seemingly because there’s nothing better to do. And although I do quite like Penelo, it’s not really for any discernible reason – she acts as the typical “sensible and pragmatic girl next door”, with her main involvement in the plot being a lazy “girl gets kidnapped” storyline.

Rounding out the cast are the two sky pirates, Balthier and Fran. Suave and chilled, Balthier frequently refers to himself as a leading man, and pulls off the “I’m just along for the ride” vibe much better than Vaan – at least until he falls victim to a plot twist that reveals his father is working for the main villain. Fran is a bunny-eared viera who is now estranged from her people after leaving their sylvan village to go and live among humans. Both of these characters exude cool likeability, but on close inspection neither of them actually gets that much in the way of development.

A couple of niggles

Unfortunately, I noticed a couple of implementation issues that slightly decreased my enjoyment of the game. There’s a lot of talk online about whether or not the game has an input lag, and whilst I didn’t notice any problems for the game menus, there did seem to be some lag when inputting commands for Quickening attacks. Since these are on a timer, and there’s a trophy involved for getting the longer attack chains, this is slightly frustrating.

Secondly, unlike pretty much every other PS4 game, hitting the PS button to go back to the main menu does not pause the game. I missed the tail end of a couple of cutscenes and part of a battle before I noticed this.

With the Zodiac Age remake highlighting some of its strengths, and compensating for a few of its weaknesses, FFXII now stands as a pretty decent game. It may never capture my heart the way some of the earlier FF titles did, but it still manages to provide a solid gaming experience.

This entry was posted in Games and tagged Final Fantasy. Bookmark the permalink.