Whilst trying to get an estimate of how long I’d need to set aside to play Final Fantasy Type-0, I found myself on the website How Long to Beat. I soon found myself fascinated by the statistics on offer, and decided to carry out some simple analysis on the main sequence Final Fantasy titles. I’d recently tackled FFXII and FFXV, and the impression I was left with was that the main storylines of these newer games were much shorter than in the ‘good old days’. But would the general player experience confirm my hypothesis?

So, without further ado, let me present my findings in tabular and graphical form: 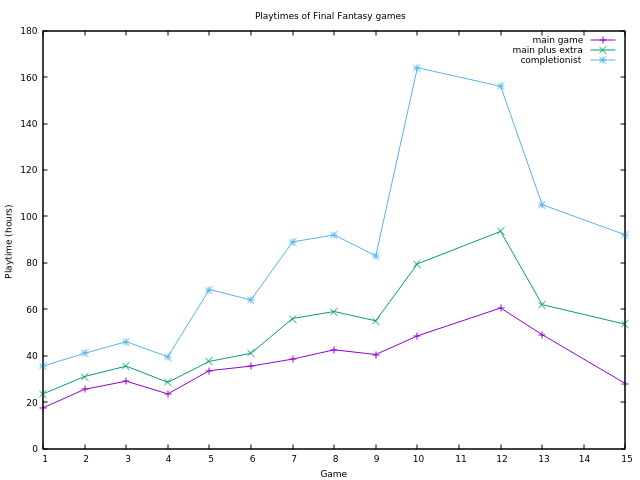 What exactly are we looking at? For each of the single-player numbered FF games (FFXI and FFXIV are excluded as MMOs represent a very different experience), three values are plotted. The purple line represents the average time taken to complete just the main game. The green line is the average time taken to complete the main game and some sidequests along the way. The blue line represents the average time to complete absolutely every last thing in the game. The number of players polled for each data point varies – for newer FF games it’s about 200-300 for “main game” and “main game+extra”, and 50-100 for “completionist”. The numbers are lower for older titles.

What about remakes and remasters? How Long to Beat has separated out the following, which were not included in the data above:

For The Zodiac Age, the new fast-forward function brings the gameplay time down significantly:

In the case of FFIV, the DS remake ups the playtime somewhat. This is almost certainly because the original data is largely from the English language SNES version, which was made significantly easier than the original release. The DS remake of FFIV restores all the original challenge.

For the other two games, the playtime for the remakes is not significantly different from the originals.

In all other cases, rereleases on other platforms are lumped in with the originals, even if the rerelease has new content or a fast-forward function.

With all that in mind, what are the trends telling us? As you might expect, we see a slow but steady increase as the series progresses, which should come as no surprise. The original Final Fantasy is pretty short and basic, whilst later games weave in epic storylines with larger worlds and a real smorgasbord of sidequests.

There are some individual features we should note, however:

Well, what have we learnt from this analysis? We now know that even past its heyday, Final Fantasy games were still delivering content, even though it was less fun – at least up until FFXV. And it comes as no surprise that a game which was rushed to release after spending years in development hell, a game that didn’t even start life as a main sequence FF, should fall short of the mark. Even if you loved FFXV, you can hardly argue that the core game was a lengthy experience. Will FFXVI be similarly short, or a return to the content-packed extravaganzas of yore? Only time will tell.

This entry was posted in Games and tagged Final Fantasy. Bookmark the permalink.