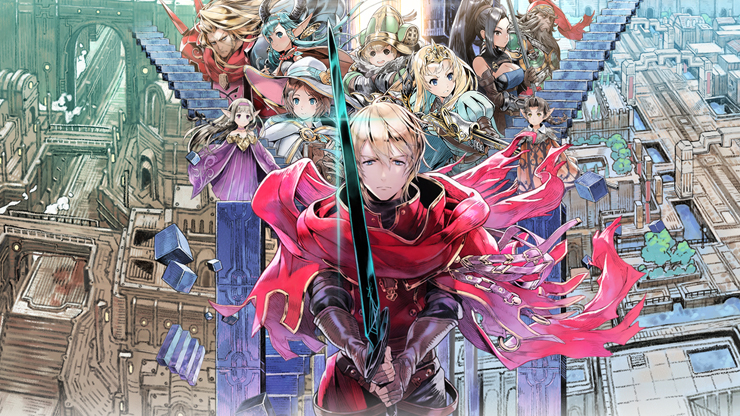 The world is slowly turning to desert. Almost all timelines lead to ruin – except one. Entrusted with the mysterious White Chronicle, special agent Stocke gains the power to travel between past and future, but can even he guide the world to its salvation?

A recurring theme in my life is that when I buy a game and don’t get to playing it straight away, a remake or remaster gets released before I even touch the original. Such was the case with Radiant Historia – even though I own a still-sealed copy of the original DS release, when I came to play it, I decided to shell out for the digital version of the ‘Perfect Chronology’.

Ultimately, I’m glad I went for the new version. As well as some tweaks to the UI, translation and character art, Perfect Chronology adds a significant amount of new content. As we’ll discuss in a moment, the main games consists of two timelines – the “Standard History” and “Alternate History”. Perfect Chronology adds “Possible Histories” – short quests that take place in a variety of additional timelines. Finishing all of these unlocks a whole new ending chapter that goes beyond the events of the original story. All of this new content can either be played alongside the main story in “Perfect Mode”, or separately in “Append Mode”.

The game also adds a new challenge dungeon where you can earn powerful new weapons and skills, as well as new ‘hard’ and ‘friendly’ difficulties. Friendly difficulty lets you skip most battles whilst still earning the EXP, thus turning the game into more of a visual novel.

Anyway, enough about the additional content – how does the core of the game stack up? As mentioned above, the game takes place across two timelines. Although these diverge due to a decision you make at the start of the game, the timelines can still have some effect on each other – for example, saving an NPC in one timeline will result in them also being saved in the other timeline. Since time travel rarely makes sense at the best of times, it’s best not to think too much about how it works here.

As you play through the game, you’ll frequently find yourself at a point where the only way to progress in one timeline is to switch over to the other and advance the story there. Later in the game, you’ll also have to go back to earlier points and use your knowledge of what’s to come to further tweak the timeline onto its correct path. As with true visual novels, there are also numerous decision points where a wrong choice can lead to a bad ending. True completionists will want to see all of these bad endings, but be warned that some of them are almost comical in their melodramatic abruptness. See for example the ending where your failure to get one of the playable characters back together with his girlfriend leads to him dying “friendless and alone”. Since he’s a key player in the history of the continent, this one act is all it takes to destroy humanity’s future.

One unfortunate side effect of all this tweaking of history is that you will have to repeat chunks of the game. Fortunately, cutscenes you’ve seen before can be skipped – although if they differ by even one line because of your changes to the timeline, you will have to sit through the whole thing. There are other important points where the nearest place you can jump to will require you to trek through the same dungeon multiple times in order to change one tiny thing. Even though the game is relatively generous with times and places you can jump to, a couple more judiciously placed ‘nodes’ would have saved some of the most tedious backtracking, and made for a more streamlined experience.

Unless you play in Friendly mode, expect to spend a fair amount of your play time in battle. I’ve seen a fair few criticisms of the battle system, mainly levelled at the palette-swapped monsters and repetitive feel of the standard encounters. In all honesty, I don’t think Radiant Historia is any worse than the average JRPG in this regard – yes, after forty hours of play I did start to get a bit tired of the battle system, but by that point I was about 80% through the game.

The battle system actually benefits from being a bit different from the norm. The enemy gets a 3×3 grid to stand on, with most units taking up one square. Your party has access to abilities which can push or pull enemies onto other squares, meaning you can set up combos where you push the enemy all together onto a single square, then use a finishing attack that hits them all at once. Squares can also be loaded with both buffs and traps, so it’s important to keep an eye on the enemy formation.

There are a couple of other features worth noting. Allies can use the ‘change’ command to switch turns with enemies and each other, enabling you to build up a long string of consecutive turns for your party. Switching turns does temporarily decrease your defence, so it isn’t a risk-free strategy, but long uninterrupted attack chains also boost the amount of damage you do per hit, so it’s worth doing.

It’s slightly annoying that you can’t switch allies into and out of the party on the fly, but to make up for it, anyone not in the active party can jump onto the field to perform a Support Attack. Although these are sometimes pointless, as an ally may just target an enemy who was already at KO-ed, they can also provide useful buffs or follow-up attacks. Better still, Support Attacks never cost MP, so you can get powerful attacks and magic for free, even from a character who has run out of MP.

Visually, Radiant Historia offers a pretty standard range of top down environments and 2D sprites – it doesn’t look bad, but nor is it anything particularly special. Character art has been redrawn for the new version, ditching the thicker lines of the original for a more standard anime style. Personally, I wasn’t too bothered by this – especially never having actually played the original – but if you have money to burn you can pay for DLC packs with the original artwork and new ‘chibi’ artwork. There are also some extra events you can purchase as DLC, should you feel the need to.

The in-game music is also pretty much standard JRPG – it does the job well in setting the atmosphere, but isn’t up there with the likes of Chrono Cross and Final Fantasy in terms of sheer quality. The best and most memorable track is probably the battle theme, which is just as well as you’ll be hearing it a lot.

Radiant Historia Perfect Chronology is a deceptively well-made game – it feels like something I could put together myself given enough time, but by no means comes across as amateurish or poorly done. I easily spent over fifty hours on the game without really noticing the time passing, and apart from a couple of superbosses that would have taken a while to grind for, I was happy to see everything the game had to offer. If you need an excuse to break out the 3DS, you won’t go far wrong with this.

If you like games about traversing different realities and altering timelines, then why not try: