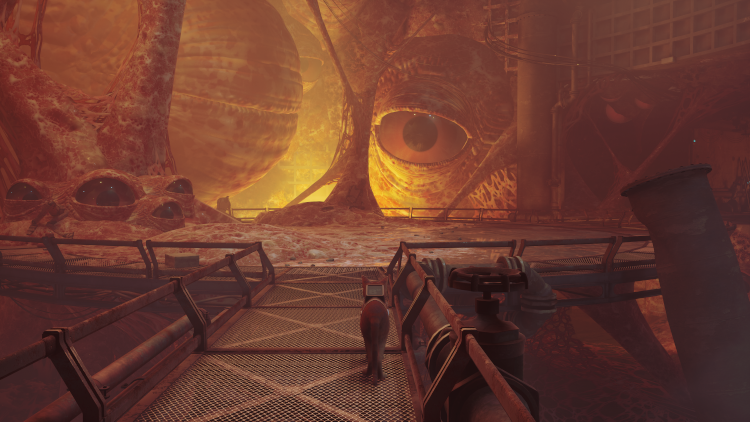 In the distant future of a world where humanity is long gone, a ginger cat whiles away his days with his fellow felines. But when a plummet into the unknown takes him into a dome populated with sentient robots, his adventure begins.

The internet is basically a huge repository of cat pictures and videos, and so it should come as no surprise that a game where you can actually play as a cat[1] would attract a lot of attention. Initially intended to be an early PS5 game, Stray’s release was pushed back a bit even as it expanded to include both PS4 and PC. By the time it actually hit the shelves, it was safe to say that we were all impatiently chomping at the bit to play it. But could it possibly live up to the hype?

As mentioned above, Stray lets you step into the paws of a ginger cat looking to find his way back home. Although the game is only 5-10 hours long in total, there are a variety of gameplay elements to be found. At its most basic, Stray involves a lot of exploration, with climbing and jumping being the order of the day. That being said, don’t go into this expecting a platformer – the process of exploration is far more deliberate and akin to what you’d expect from an action-adventure game.

On top of this, our floofy boy gets to strut his stuff in a number of other situations, including fetch quests, rapid escapes from swarms of monsters, puzzle solving and even a number of stealth sections. It’s nice to have a variety of activities on offer, but we only really get superficially exposed to these different genres, with gameplay elements departing as swiftly as they arrived. Nonetheless, while hardly stellar examples of their craft, for the most part the gameplay is solid enough. There are a couple of exceptions worth noting, though. The aforementioned fetch quests feel a bit tedious and are artificially lengthened by the game’s refusal to provide a mini-map to help navigate the city streets. Elsewhere, the latter part of the stealth section seems a bit poorly put together, and personally it turned out to be easier to just cut and run to the end of the section than attempt to play it ‘properly’ and repeatedly get gunned down by robot sentries.

But what of the game’s main draw – namely, that the character performing these actions is not some flavour of humanoid, but is in fact pure feline? Fortunately, a lot of thought has been put into this aspect, and Stray’s protagonist never fails to delight. Not only is there a dedicated button for meowing, but your cat can curl up in all manner of places, and even weave in and out of the legs of robotic passers-by. Catlike actions are even integrated into gameplay, with the feline tendency to scratch everywhere and hide in boxes ultimately proving important to progression. In short, Stray offers you the chance to play as a delightfully catlike cat – the only real disappointment is that the base game doesn’t offer any way for you to customise your kitty, although PC players can pick up mods to do just that. 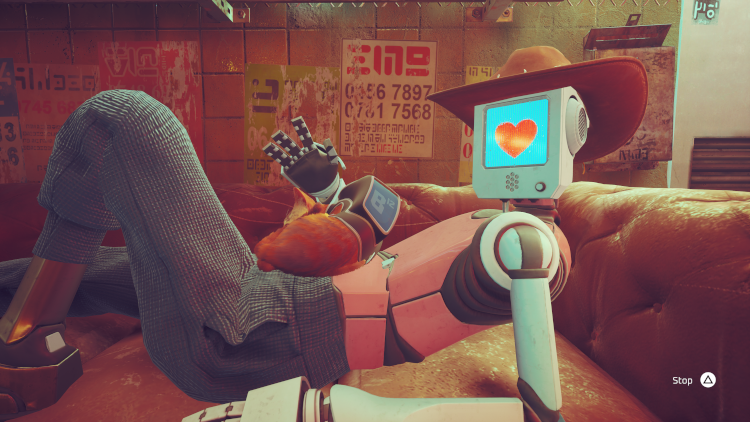 Story-wise, Stray opts for a simple plot set against the backdrop of a wider dystopian future. In the immediate term, you are a lost cat looking to find his way home, with a sentient drone acting as your friend and guide. But the world you inhabit speaks to a wider story – a future where humanity doomed itself to extinction, leaving only a society of robots and artificially engineered predators behind. As with the gameplay itself, it’s a solid backdrop but nothing particularly original and outstanding, and even the plot beats which are designed to elicit emotion are exactly what you’d predict.

Visually, Stray presents a strong cyberpunk aesthetic, ranging from the grime of the neon-lit slums to the clinical whiteness of the erstwhile engineering headquarters. While most eyes will be on the cat himself, there are some nice touches to be observed elsewhere, such as the way the robots’ faces light up when they interact with the game’s feline protagonist.

The game’s soundtrack has been much praised elsewhere, but while it certainly helps to set the mood, it didn’t particularly grab me. I did try listening to it outside the context of the game, but it functions best as background music and doesn’t really hold its own as something to listen to by itself.

Taken on its own merits, Stray is a fun little game. It offers up a largely solid gameplay experience, and tops it off with the novelty of playing as a cat. Admittedly, the hype left me expecting something more, but if you can put all that to one side, you can have a fun time playing a feline adventure that won’t outstay its welcome.

[1] Of course, Stray is not the first game that lets you play as the cat, but it is perhaps the most high profile at time of writing. For some other feline options, check out my blog on Cat-based video games.