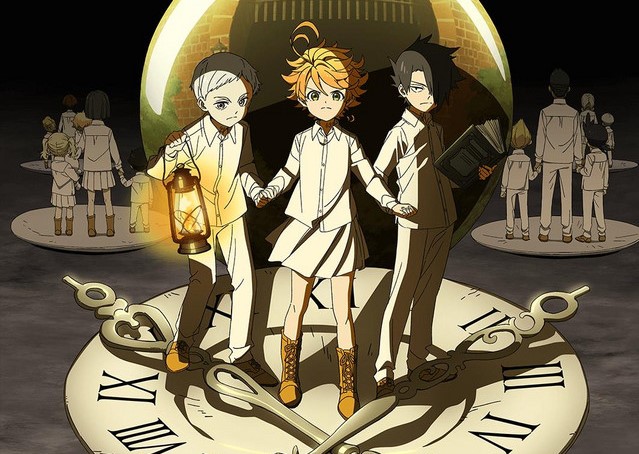 The children of Grace Field House orphanage lead an idyllic life. Under the supervision of their caretaker Isabella, every day is fun and wholesome. But when one of their number is adopted, two of the oldest children discover the truth – far from being sent to live with new families, the children’s ultimate fate is to be eaten by demons. Armed with this new information, can the children figure out a way to escape?

I first encountered The Promised Neverland when the anime started airing, but I enjoyed the experience so much that I turned to the manga to find out what happened next. Given what I’ve heard about the anime’s second season, it’s perhaps just as well that I never got around to watching that, instead sticking with the manga for the remainder of the story.

Let’s start by talking about those auspicious beginnings, namely what has come to be known as the Grace Field House arc. The story introduces our protagonists – Emma, Ray and Norman – three super-smart eleven-year-olds living idyllic lives at Grace Field House orphanage. If that was all there was to it, then there wouldn’t be much more to say. But of course, there is a darker truth lurking behind these scenes of sweetness and light. During the supposed adoption of one of the younger children, Emma and Norman stumble upon the truth – getting ‘adopted’ actually means getting killed and eaten by hideous inhuman creatures. What’s worse is that their beloved caretaker Isabella is party to this, deliberately raising the children in idyllic ignorance before shipping them off to become a tasty feast.

In both anime and manga form, the first arc of The Promised Neverland feels close to perfection. The tension is perfectly balanced, as the children try to both outwit Isabella and figure out who they can trust. There are plans and counter-plans, with the multitude of twists and turns offering a plethora of nail-biting moments. The only real blemish on the whole thing is the somewhat stereotypical physical appearance of the only adult Black character, who has unfortunately exaggerated lips.

The end of the arc marks the end of season one of this anime, and also the beginning of a new adventure for the protagonists. There will be spoilers ahead, so proceed with the remainder of this review at your own risk.

While the manga never recaptures those early highs, it does still remain enjoyable for a while. Having breached the walls of their idyllic prison, the children find themselves travelling through a demon-infested wilderness, with only vague guidance as to where they go next. After meeting up with friendly demons Sonju and Mujika, they eventually find an underground shelter guarded by a lone survivor – a now-grown man who similarly escaped his orphanage as a child.

All of this leads into another fan favourite storyline, and one which captures a lot of the spirit of the start – the Goldy Pond arc. Goldy Pond is a sinister playground, a mock village where rich and powerful demons hunt human children for sport – since the thrill of the chase is much more exciting than having pre-prepared food.

For me, the Goldy Pond arc doesn’t quite recapture the spirit of the Grace Field storyline, but it still has a lot to commend it. Once again, we have a group of children using their wits to face off against powerful demons, and while we can probably assume that things will turn out all right in the end, we can’t be sure what the ultimate cost will be. With a compelling arc villain, and some likable new characters to add to the existing cast, the Goldy Pond arc certainly has a lot going for it.

Unfortunately, it’s at this point that things start to unravel somewhat. From hereon in, it seems as if each successive plot development has to be bigger and more spectacular than the last, but that of course frequently paints the author into a corner, forcing them to pull out a half-arsed resolution later on.

By this point in the story, the children have discovered that their world isn’t all it seems. A thousand years ago, humanity was at war with a race of demons intent on devouring them. Eventually, a promise was made with a powerful demon to split the world in two. On one side, most of humanity would live demon-free lives. On the other, humans would be farmed and raised as demon meat. Unsurprisingly, Emma and the others aren’t thrilled about this arrangement, and they resolve to find the being who enacted this promise, and organise something new.

As the search for this being gets underway, the plot takes a number of swerves that it could have really done without. In order to gather information, Emma and her allies go undercover in various demon villages, where they discover that the demons have families, lives and children, just like humans! Sure, they survive off eating farmed humans, but they aren’t all bad, right? Maybe they could even be our friends!

With this in mind, the ever good-hearted Emma wants to find a way for both sides to coexist, except that there’s one little snag. It turns out that the demons are what they eat, and the only reason they even became sentient was because of their human-based diet. If they were ever to stop eating humans and revert to eating animals, the demons would lose all of that. What a dilemma to face! Surely this will make for some high stakes tension and drama.

Well, it does – for about five minutes. And then it turns out that the friendly demons Sonju and Mujika have a magical mutation that means they can retain their sentience without needing to feast on human flesh. And it just so happens that this ability can be transmitted to every single other demon, thus conveniently resolving this major plot point. Now, admittedly, the demonic royalty isn’t too happy about this, and some conflict results, but none of this inter-demon conflict is nearly as interesting as the arcs that came before.

This abruptly-terminated sense of jeopardy doesn’t just affect this one plot point either. Recall, for a moment, my praise for the first arc for being so perfectly crafted when it came to narrative tension. Unfortunately, quite the opposite is true later on. Let’s examine two more examples.

Towards the end of the first arc, one of our protagonists – Norman – is sent away for ‘adoption’, the euphemistic cover for getting devoured by demons. Norman accepts his fate with equanimity, and Emma and Ray are left to lead the escape without him.

We’re left wondering about Norman’s fate for a while, but given the low key nature of his departure, it’s hard to believe he actually did get killed off, and indeed, we later learn that he survived. Norman was sent to an experimental facility, where children are enhanced in various mental and physical ways. Indeed, several of these enhanced children join the already expansive cast in later chapters.

Unfortunately for Norman, his attempted enhancements were detrimental to his health, and the prognosis isn’t great. Oh no, you say. What dramatic poignance, as Emma and Ray are reunited with their best friend, only for their time together to be cut short! Except that there really is no tension here, as Norman’s condition is cured shortly after.

Similarly, towards the end of the series, the evil demons and their allies have almost been defeated, when one last threat emerges – Isabella and the other “Mothers” of Grace Field and its ilk. Will these women stand against the children they once raised? How will our heroes deal with this new obstacle? Well, no need to worry, because in the interests of plot expedience, Isabella leads her fellow Mothers in turning against the demons and supporting the heroes instead. This convenient turn of events happens quickly enough to give any reader whiplash – in fact, it only gets any sort of context and development in a special additional chapter published after the main series finished.

Since this is a manga review, it would be remiss of me to not devote at least a couple of sentences to the visual elements of the series. Overall, the artwork is very good – the demons designs are fascinating and grotesque, while the main characters have distinctive designs captured in bold lines. Unfortunately, there are a couple of weak points. Despite some excellent efforts to make everyone in the series’ vast cast of characters look distinctive, it does occasionally get difficult to remember who’s who among the more generic-looking younger children. Also of unfortunate note is the somewhat stereotypical “dreadlocks and big lips” look of Sister Krone, the most notable Black character in the series.

The first arc of The Promised Neverland is pure excellence, a true example of manga at the top of its game. Unfortunately, like so many SJ series, it doesn’t really know when to stop, dragging things on into mediocrity and questionable plot quality. Once you start reading it, you won’t want to stop, but you really should.

This entry was posted in Manga. Bookmark the permalink.