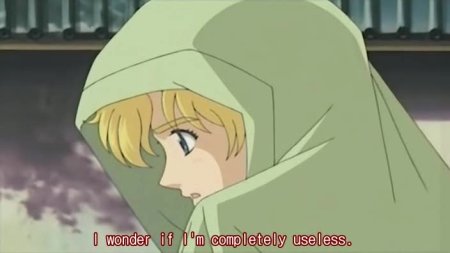 Inori is out walking. Shimon follows a short way behind him, wearing a blanket to disguise his blonde hair.

Inori: What are you, a stalker? Leave me alone!

Shimon: But…we’re supposed to be HARD GAY partners working together to find our Yu-Gi-Oh card.

Inori: Like I’d ever be HARD GAY with you! Even though you’ve been perfectly harmless for the last fourteen episodes, I’m still not convinced you aren’t a demon.

(Shimon: Maybe I am really as useless as everyone says.)

Sefuru: You don’t want to be HARD GAY with him. Why don’t you hang around with someone your own age, like me?

Akane: Hey, did you hear? Shimon says he has a friend now.

Tenma: A friend? Wow, even Shimon can make friends.

Sefuru and Shimon now spend a lot of time together.

(Shimon: This guy is my friend, and certainly not an evil demon who tried to kill Akane a few weeks ago.)

(Sefuru: This guy is definitely another demon, and not a blonde shota destined bishounen from the OP.)

That night, Shimon tells Akane about his new friend.

Shimon: He’s a bit like a classmate that used to bully me- which is good, because that’s the only kind of relationship I can understand. Oh, and by the way, he’s a demon.

From a distance, Sefuru spies on Shimon and Akane.

Sefuru: Oh no, he’s a destined bishounen after all! Now I instantly hate him and want to kill him.

The next day, Sefuru plots to use Shimon to lure out Akane. Ikutidal appears from nowhere.

Ikutidal: Sefuru, what are you doing? Are you sneaking off to see other men again?

Sefuru: So what if I am? I don’t even want to be HARD GAY with you anymore!

Shimon: Leave him alone, whoever you are! Sefuru is my friend!

Shimon and Sefuru run off.

Sefuru: Yes, Shimon, you are my friend, and I am not in any way trying to exploit that fact to hurt you and the Priestess.

Shimon: It’s okay if you’ve hurt and killed people in the past, because now that we are together, we can put things right.

(Sefuru: This guy is even more stupid than I could have imagined! He must be desperate for some HARD GAY.)

Sefuru: In that case, Shimon, would you mind coming alone with me to a dilapidated and suspicious looking house?

Shimon: Of course not! Let’s go.

That night, Shimon willingly follows Sefuru into the house of evil. At the manor, Akane wonders what has happened to Shimon.

Inori: I wouldn’t worry about it- he’s just a demon.

Akane: He’s not a demon! And even if he were, demons are just like us. They have family, friends- the only difference is that they try to kill us every week, but surely that can be put down to a simple misunderstanding.

Meanwhile, Sefuru hides and leaves Shimon in the house with a glowing yellow rock. As the rock turns into a monster-of-the-week, a conveniently placed peasant wakes up and sees it with Shimon.

Peasant: He’s summoned a monster of the week! He must be a demon!

The monster waves its tentacle-vines around ineffectually. A small child who has randomly appeared gets hurt.

Shimon: Sefuru, what’s going on? I think there’s been some kind of mistake!

Various other peasants appear and accuse Shimon of being a demon.

Peasant: I don’t recognise him from the OP at all! He must be a demon!

Inori: Even though you’ve always been harmless, I knew you were evil! I’ll never agree to be HARD GAY with you!

Inori takes the injured child and leaves. Shimon has no choice but to run away. Sefuru finds him.

Shimon: Sefuru-kun! Something went horribly wrong back there, but I know you had nothing to do with it.

Whilst Shimon willingly follows Sefuru, Yorihisa and Tenma go out to look for him.

Sefuru: I’m sorry, Shimon, this was all because we got accidentally separated.

Shimon: I understand, Sefuru-kun- your story isn’t suspicious at all.

Meanwhile, Inori takes Akane to exorcise the impurity that has infected the injured child.

Akane: Magical Plot Powers, use a simplistic animation sequence to dissolve the impurity!

Inori: Don’t worry, kid, I’ll get the demon who did this to you.

Child: He didn’t hurt me- he tried to save me. I just happened to notice that there was another demon in the background controlling the monster.

(Inori: Could it be? Could Shimon really be good, as all prior evidence has already indicated anyway?)

Tenma, Yorihisa, Inori, Akane and Kotengu all rush to find Shimon. Tenma and Yorihisa hold off an angry mob of generics whilst Akane and Inori enter the house where Shimon is with Sefuru.

Inori: Shimon, get away from him! He’s the one who was controlling the monster, and a few episodes ago he tried to kill Akane with the eight-stringed kin!

Shimon: But he’s my friend…

Inori: Didn’t you hear me? He tried to kill Akane!

Shimon: Kill Akane? Sefuru-kun, how could you? I ill-advisedly trusted you!

Sefuru: You fool! If you watched the OP, you would know I was a bad guy! Now I will just stand back and summon this monster that you will easily be able to defeat!

Sefuru: Even though I had deduced that you were a Hachiyou and were thus trying to use you, I also thought you were one of us.

Sefuru: You are!? I had already realised that, but for some reason it now makes me incredibly upset! Go, pathetically weak monster!

The monster waves its tentacles around some more.

Inori: Raging Hard-On! Create the inconsistent fire powers that I sometimes have!

Inori shoots fire at the monster.

Inori: Up until about five minutes ago, I hated Shimon, but now he is my friend!

Unfortunately, the fire attack has no effect.

Shimon: I’m sorry, Inori, but this is my episode, and that means only I can defeat the monster. Raging Hard-On: Earth Mode! Give me power so that I can be useful for once!

Shimon summons an Earth attack that defeats the monster.

Sefuru: Oh no, my weak and ineffectual monster was defeated! I’d better teleport away!

(Shimon: Sefuru, even though you abused my trust and tried to kill me, I still count you among my friends.)

Inori: Shimon, even though I’ve been rude and abusive towards you up until now, starting today, I’d like to be your friend.

Shimon: Of course- I’ll be friends with anyone who will have me.