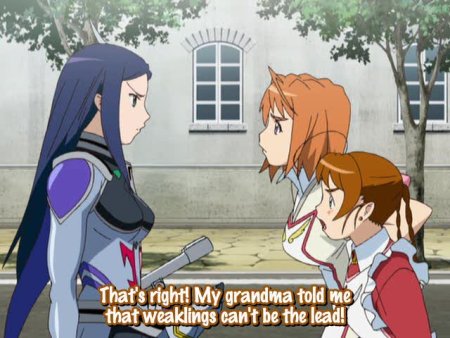 Last night, I suddenly thought it would be a great idea to create a secondary blog for non anime and manga-related material, completely ignoring the fact that a) I may not even have the time or stamina to maintain it and b) anything posted to this blog will probably be pointless ramblings devoid of anything resembling quality. Nonetheless, it exists now, and will probably continue to do so for as long as I want to ramble about Lost and Stargate.

Meanwhile, on the anime side of things, I have decided to adopt a new, harsher policy for tackling the autumn season. Instead of subjecting myself to the usual three episodes of pain for a substandard series, I will aim to drop it after 1-2 episodes.

Le Chevalier d’Eon 4: Chevalier continues in strong form as the Four Musketeers accept a mission from the King, whilst d’Eon grapples with whether or not to accept his main character destiny and allow Lia’s spirit to use him. Hopefully it was just my imagination, but the animation seemed a little weaker in places this time; other than that, however, this was another worthy episode.

*NEW* D.Gray-man 1: I wasn’t too enthused over the prospect of watching the next incredibly generic and potentially lengthy SJ anime, but after the awfulness of Pumpkin Scissors, I thought it might seem watchable. This “poor man’s FMA” series of Exorcist Allen Walker, meganekko Moore and the weekly Akuma they must combat isn’t particularly enthralling, but I can see myself watching this to fill up the gaps until something better comes along.

OP impressions: Oh dear, the late eighties are back.

*COMPLETE* Higurashi no Naku Koro ni 26: It’s time for a showdown in the school when Rena takes her classmates hostage and somehow figures out how to set a bomb. Like the rest of this arc (past Teppei’s death), this episode didn’t do as much for me as many of the earlier episodes, and the ending smacked a little too much of the “power of friendship can make all things right”, but I’m already looking beyond the anime now, and looking forward to delving into the intriguing world of game spoilers. 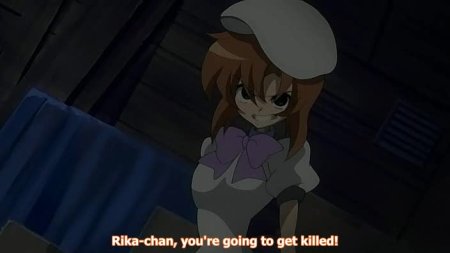 *COMPLETE* Honey and Clover II 12: From fervent praise to outright ranting, my feelings about Honey and Clover have really run the gamut over the course of this second season, with this final episode taking the middle ground. The ending didn’t come anywhere near provoking the emotion I felt at some of the series’ finer hours, but nor did I feel particularly disappointed- it was simply a quiet, slightly bittersweet experience.

Love GetChu! 4: It seems as if fortune is smiling on Momoko when she gets a chance to work as a stage hand for an event featuring her beloved Minato- but naturally, when things are going well for a main character, it can only mean that disaster is sure to follow. It’s predictable, and a touch annoying, but for the most part, it’s good fun.

Otogi-jushi Akazukin 11: Our heroes make a brief stop at Shirayuki’s old magic school, and whilst Souta and the others end up taking part in the school play, Ringo decides that she no longer wants to be completely useless. Naturally, it isn’t long before the villains show up for their doomed weekly attack, and in short order everything proceeds in the usual predictable yet mildly entertaining fashion.

*COMPLETE* Ouran High School Host Club 26: In order to prepare for disappointment, I had convinced myself that the ending of Ouran would be one of the series’ weaker moments. As it turns out, however, this episode was extremely satisfying, seeing the Host Club’s dramatic and well-animated attempt to save Tamaki from the clutches of his decision to dissolve the Host Club and marry Éclair. The only real weak point is Éclair herself, as a dislikeable and undeveloped one-shot character, there is hardly much incentive to feel any sympathy for her, even when the plot seems to demand it. 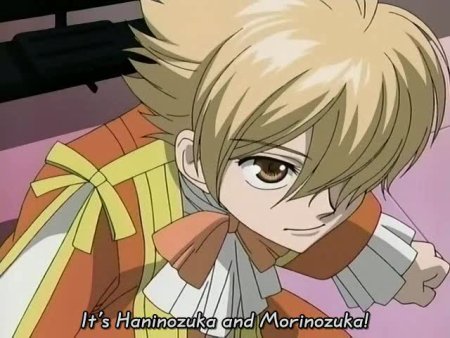 *NEW/DROPPED* Pumpkin Scissors 1: Every time a Gonzo series like this comes along, I know deep down that it will most likely disappointment, but I have to watch anyway, because “you never know, it might just be the next Last Exile”. Unfortunately, to compare Pumpkin Scissors (a title that puts me in mind of a Rozen Maiden spin-off) to Last Exile would be a feat beyond the wildest of imaginations- this tale of war, tanks and chemical weapons has generic Gonzo stamped all over it. The first episode introduces a spunky blonde girl and a scar-faced man with berserker abilities who come together to track down a vaccine for some infected generic villagers. Since I could barely bring myself to care about what was going on in this episode, I won’t be continuing with it.

OP impressions: Vaguely Ali Project style, but the singer doesn’t quite seem up to the pace. The video shows off the leads and generic allies.

ED impressions: A cheerful song with a video of the series’ resident canine- unimpressive and out of place.

Romance of the Three Kingdoms 24: My worst fears have come to pass- the hilarity of the ROTK subtitles is down by over 90%, and there are still 23 episodes to go. Happily, the hilarity of the episode itself more than compensates for this new lack; when you’ve got generics half-heartedly slashing at each other and Zhang Fei trying to lure a general out onto the battlefield by get his men to shout out “you’re a coward!”, any added grammatical errors are just the icing on the cake. Once again, I must highly recommend this to anyone curious to see how “it’s so awful it’s good” can be raised to an art form.

Saiunkoku Monogatari 18: No matter how many vases he broke, Sai couldn’t escape the fact that he was too fat, bald and generic looking to be more than a minor villain. This episode seems to spell his downfall (or at least a good chunk of it) whilst Shuurei rushes to get to the enquiry on time and Kijin is challenged to remove his mask. It’s not quite up to the level of earlier episodes, but since this is SaiMono, it’s still a fair way ahead of most other series. 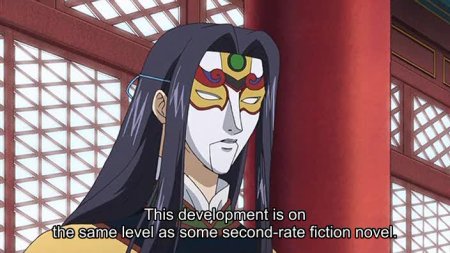 Kanon/Air 2: This isn’t so much a review as a plea for help- I really need guidance in the world of Kanon and Air manga, and nowhere more so than with regard to this bizarre fusion. The chapter I read seemed to consist of Makoto eating meat buns and little else.

Mai-Otome 30: To no-one’s surprise, Sergey is revealed to be an ultimate villain of evil in this episode, with catgirl Mikoto and the real Mashiro by his side. Can Manshiro and his harem of Justice stand against this new threat? As usual, it’s nothing special, but there are some well drawn scenes.

Mushishi 10: This extremely satisfying chapter of the Mushishi manga corresponds to the excellent twenty-first episode of the anime, in which a woman gives birth to a strange green gloop, only to find a succession of babies under her house over the ensuing years. To say much more would be to give away a few of the twists that make this chapter so compelling, but suffice to say that even by Mushishi’s high standards, this is an extremely worthy instalment.

*DROPPED* Natsu no Arashi 2: It’s not often that I drop a manga series so close to the beginning, but it would be no exaggeration to say that reading this chapter literally gave me a headache. I still have little clue as to what the story is supposed to be about, and in fact, I am beginning to doubt whether Jin Kobayashi has any idea either; if anything, he seems to be just making it up as he goes along and hoping for the best. School Rumble or not, promise of white-haired Yakumo look-alike or not, this one has to go.

REC 16: Eccentric anime director Sekigahara makes an unwelcome return in this chapter, which sees him inadvertently let slip that Aka has a boyfriend on national radio. Cue another “can our relationship survive” moment as Aka’s reputation as an ‘immaculate idol’ seems destined to be shattered. This ranks amongst REC’s angstier segments, and as a result is not one of its better ones.

Saiunkoku Monogatari 4: Why did no one tell me I could get this file from IRC before I joined the scanlation forum and made over 25 posts? Anyway, even though this is just covering the early episodes of the anime, the long-awaited file proves to be worthy enough to justify the wait, although the artwork seems a little off in a few panels.

The Melancholy of Haruhi Suzumiya vol 4, chapter 2: Kyon should really be happy about being in a world where Haruhi isn’t attending his school, but instead he’s desperate to get things back to normal. This chapter sees him making the acquaintance of the alternate Nagato, a version with enough personality to be able to smile. I have to admit that volume 4 is proving to be the most enjoyable part of the franchise so far.