Have I mentioned lately how much I hate computers? Having dug out my old printer in order to print some important documents, I discovered that the months of inactivity have rendered it unusable for anyone wanting to do more than printing blank pages. Having left everything to the last minute (and at this bank holiday filled time of year), this is more than a little problematic, but I swear that next time I will be more efficient.

Next week will diverge from the usual format to bring you a special New Year Rumble, complete with Annual Awards, Anime Rankings, and anything else I can think of before next Tuesday.

I’m not HARD GAY, get me out of here! 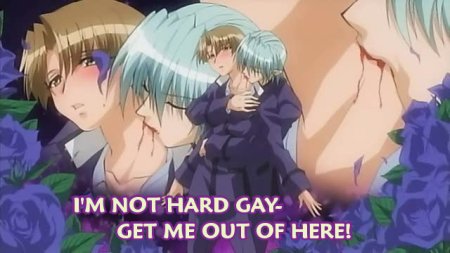 Tired of endless reality TV shows putting F-list celebrities into unlikely situations and successively voting them off week after week? Fortunately, we have just the thing for you- a much needed spin on an overused format, entitled “I’m not HARD GAY, get me out of here!” The series takes twelve well known straight anime characters and sends them to an island filled entirely with bishounen tasked with turning our contestants HARD GAY; every week, a combination of judges’ scores and audience votes is used to decide which contestant is not HARD GAY enough to stay. By the end, only one man remains to claim the ultimate prize- a night with Lui from Meine Liebe! Look forward to it! 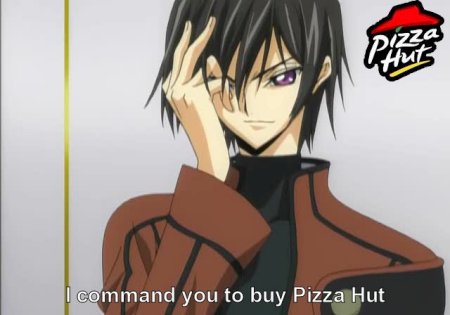 The official English release will have new subtitles and an exclusive watermark.

With all the rumours flying around about Code Geass being licensed, it would be logical to think that Bandai was the one responsible, but I beg to differ, for who else could it be other than Pizza Hut themselves? In an effort to expand their business enterprises, Pizza Hut have decided to move into anime, hoping to ensnare hungry anime fans desperate for a snack as they sit at their computer watching episode upon episode of anime.

As part of this plan, Code Geass DVDs will be sold with discount vouchers for Pizza Hut, whilst anyone buying a family meal from Pizza Hut will receive free merchandise- everything from Code Geass baseball caps to Knightmare models! Get on down to your local Pizza Hut now to take advantage of this great offer! 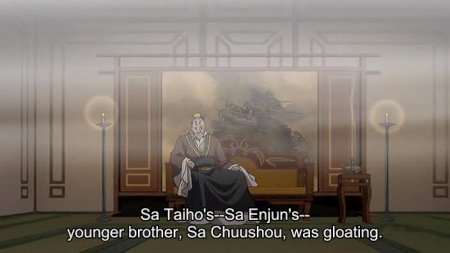 Gloating is an essential part of being a villain. 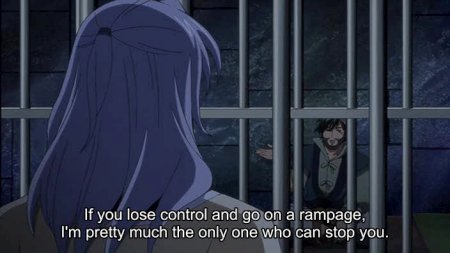 Ensei’s HARD GAY is the only force that can match up to Seiran. 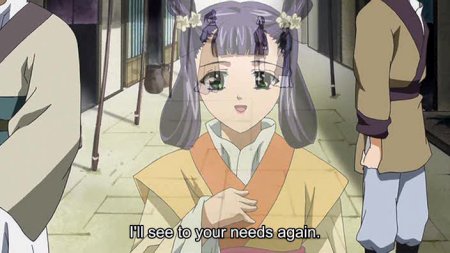 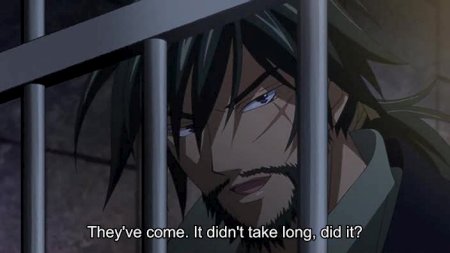 Ensei is impressed by some speedy HARD GAY. 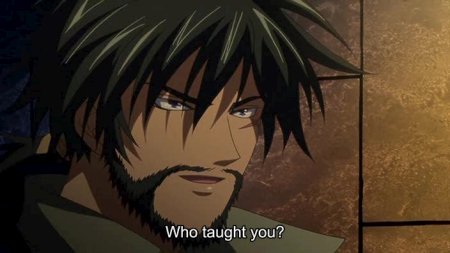 He becomes determined to learn who can teach him new HARD GAY techniques. 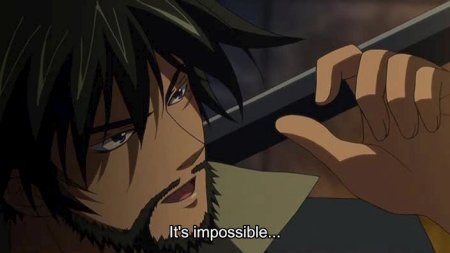 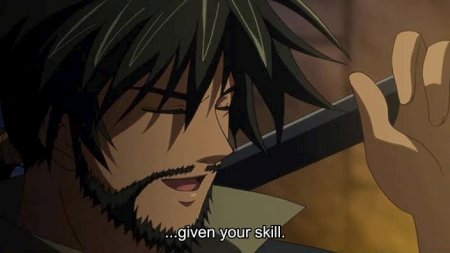 Flattery will get you everywhere. 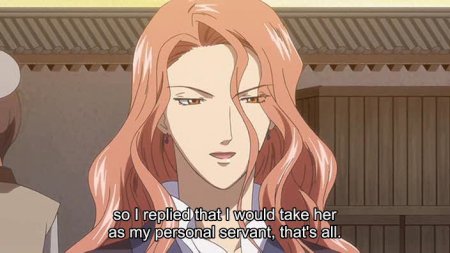 (Ayatachi: By wearing this mask, no one will guess that I am the blonde bishie from the OP.)

(Evil Priestesses: We too will wear masks to obscure our identities as the classmates of the heroes).

Yuzu: I have no idea who you are, but we will fight you!

Ayatachi: I don’t think so- summon monster of the week!

Ayatachi and the others stand well back and summon a monster of the week to attack the heroes.

Yuzu: Everyone, use your stock animation attacks against it!

Standard attacks are used, and the monster is defeated.

Ayatachi: Gwakaka, no matter how much you struggle, you cannot prevent us from summoning the ultimate evil until the last episode!

Ayatachi and the others flee.

Yuzu: Come on, let’s get back to my place for another priestess training arc.

Hiro: Hey, I’m important enough to be mentioned on the back of the DVDs, but I hardly have any screentime.

Yuzu: Quiet, Hiro, you won’t be important until the final arc. Now go home and have some comedy scenes with my father.

Obscure crossover of the week: Today sees a rather odd connection between two very different series, Keroro Gunso and .hack. Where Keroro has Angol Mois, the woman tasked with destroying the planet, the .hack game OST has a track named ‘Angorumoa’.

OP of the Week: OPs come and go from the Weekly Awards section, but in favour this week is one of the few recent OPs to even make an impression- the Bakumatsu Kikansetsu OP “Kouya Ruyen”. Another Yuki Kajiura/FictionJunction effort, this OP sees both composer and performer back at the top of their game.

HARD GAY man of the week: An award must surely go to Chevalier’s version of Robespierre, which showcases the HARD GAY side that history never saw fit to record. Even the leads lust after him.

*New feature* HARD GAY corner: GetBackers
No one can deny that GetBackers is a HARD GAY as it gets- just look all those young men waving their weapons around and boasting about special powers. At the core of the series are Ginji and Ban, a happy couple with issues in their pasts. Where Ban was forced to kill his former lover after he got violent, Ginji abandoned his whole HARD GAY harem, the Volts, after Ban showed him just how good he was in the bedroom (note how he always calls him Ban-chan, even in public).

Throughout the course of the series, Ginji’s former subordinates are gradually reintroduced, and almost all of them are upset that Ginji left them to start a new life with Ban. Some, like Kazuki and Shidou, come to accept the idea and even indulge in HARD GAY with Ginji once more, but others cannot see past their jealousy, and remain opponents until the end. The few female characters, meanwhile, are forced to accept that none of the males are interested in them, whilst Akabane ‘Dr. Jackal’ merely scares everyone with his desire for particularly intense HARD GAY.

OST Spotlight: Kurau Phantom Memory OST1- Indigo
Kurau has secured itself a place as one of my favourite anime series, and this excellent soundtrack played no small part in that. A selection of strong and themes with a distinctive sci-fi feel, Kurau takes everything that is good about anime and game soundtracks, whilst drawing from none of the bad. Tracks cover a range of styles, from the light-hearted to the melancholic, but rarely falter in delivering on quality. 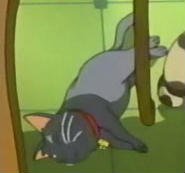 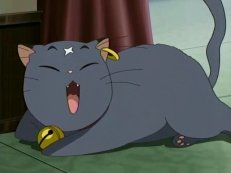 What happens if you put Mikoto on a diet? Hopefully, no one will ever try it, but if they do, the result is likely to be this cat that briefly appeared in Magical Girl Lyrical Nanoha.

Amusing Search Terms
romance of the three kingdom manga: people keep searching for this- does it exist?

densetsu weed and reika pr0n: this just scares me- who wants to look at dog pr0n?

young gay: Got to get them whilst they’re young.

you toube: The old staple.

rpg maker door sprite: RPG Maker already has door sprites, although I admit the selection is less than edifying.

fruits basket 136 memento: If you’re looking for Memento, why would you click on a blog called Azure Flame?

Shotacon: Mention shotacon just once on your blog, and you’ll get all kinds of searches for it.

This entry was posted in Tuesday Rumble and tagged anime awards, Code Geass, in your reflection, OST spotlight, SaiMono, search terms, Shrine of the Morning Mist. Bookmark the permalink.