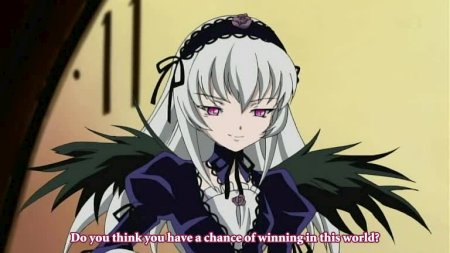 A year ago, in the dark and distant pre-Azure Flame days, I finally got around to watching both Rozen Maiden and the then recently aired second season Traumend. Despite some inconsistencies in the plot, on the whole I felt it had been an enjoyable experience, and in my mind, Rozen Maiden was firmly marked as an eminently worthy series.

The recent release of the Overture OVA, however, made me rethink my position- whilst I couldn’t deny that I had indeed enjoyed those episodes, I could no longer ignore the fact that the anime was filled with annoying plot holes. Where most people would merely grumble about these and move on, what else could I do but subject the series to the most intense scrutiny for no particular reason other than the fact that I felt like doing so?

The Plot, or where it all starts to go wrong

(although it should be fairly obvious, there will be spoilers for both anime and manga from hereon in)

At its heart, Rozen Maiden is the tale of seven animate dolls created by legendary doll maker Rozen, and brought to life by the magical Rosa Mystica. For reasons best known to himself, Rozen split the original Rosa Mystica into seven parts so that each doll could come to life, but in order to realise his vision of the perfect girl, Alice, the dolls must fight until the victor gains all seven. At this point, Rozen disappears, leaving the dolls alone until one becomes Alice and finds him.

For plot purposes, we should discount the fact that Rozen can even create living dolls in the first place, but even so, a number of questions remain. Quite apart from the issue of where the Rosae Mystica came from in the first place, why split them into seven parts just to have them reassemble again (for that matter, why spend so much time and effort on seven dolls when six of them will be ‘killed’)? Why leave the dolls on their own to fight over several eras (based on evidence from the series, they were created decades before the present day) instead of getting it over and done with? If Rozen is still living to this day, where is he, and why isn’t he dead yet? Even if, as some theorise, he put himself into the world of the N-field (more on this below), how did he do so?

Possible explanation: A vital part of creating Alice is the life experiences the dolls gain during their time in the human world. Rozen knew this, and is patient enough to wait until such a time when they have accumulated enough experience in order to end the Alice Game.

These general issues aside, further questions arise when we consider the first and seventh Rozen Maidens- Suigintou and Kirakishou. Even a man as mysteriously gifted as Rozen can make mistakes sometimes, and his first attempt at creating a Rozen Maiden was less than spectacular. As the Overture OVA shows us, Suigintou was unfinished and left on the shelf, but despite being abandoned by her ‘Father’, he later returns to give her a Rosa Mystica anyway. If he intended for Suigintou to become a full Rozen Maiden with Rosa Mystica, why not finish her and give her the Rosa Mystica straightaway?

Possible explanation: Suigintou’s pain is somehow important to the creation of Alice, although it’s hard to justify why the perfect girl would need a psychotic side.

If that was bizarre, however, it is nothing when compared to the seventh doll, Kirakishou. It is perhaps a bit of a stretch to even call Kirakishou a doll when she actually has no physical body and thus can only live in the N-field (it isn’t easy to explain the N-field, but basically it is a sort of dream world created by people’s hearts and desires). It is unknown just how Rozen could create such a doll, or even why he didn’t give her a body in the first place.

Possible explanation: Rozen was either physically unable to realise his vision of what Kirakishou should be using real world tools, or he didn’t start work on her until he put himself in the N-field.

These basic flaws lie at the heart of the Rozen Maiden universe, but even so, they seem no more offensive than those of many series, and could perhaps have been accepted if not for the franchise’s great plot black hole, more commonly known as Rozen Maiden Traumend.

Traumend, a whole new exercise in inconsistency
A series plagued with issues from start to finish, Traumend can perhaps be explained by the fact that the writers never expected it to exist, and then did not realise that they would be required to leave things open for a third season. The result- a mess of plotlines and mixed up manga chapters.

A callous disregard for the future saw Suigintou destroyed at the end of season one, but with so many fanboys, her resurrection for Traumend was near guaranteed. Although she was presumably repaired by Rozen somehow, exactly how could he do this or why he would ‘reset’ the situation when he presumably wants to dolls to defeat each other as per the Alice Game remains unexplained within the context of the series. 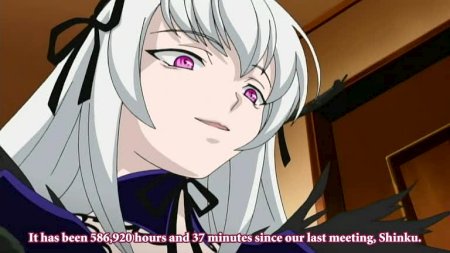 For those unwilling to do the maths, this is approximately 67 years, and is a line borrowed from Shinku and Suigintou’s first reunion in the manga. Placing it in Traumend is a pointless blunder, however, as it means that it has been 67 years since the first season.

Laplace
Although he can take the form of a normal human, Laplace’s actual appearance seems to be that of a humanoid rabbit, with no purpose beyond declaring the Alice Game ‘open’ or ‘closed’ in any given era. Exactly why the Alice Game needs to stop and start, let alone the reason for leaving it in the hands of a bizarre rabbit man, remains undisclosed.

The Alice Game begins now
Leading on from the last point, we have the fact that the Alice Game is declared properly ‘open’ in Traumend, despite Shinku talking about in the first season as if it were already in progress. One consequence of this is that at an arbitrary point in the series, Hinaichigo loses her Rosa Mystica to Shinku (who defeated her as far back as episode two of the first season), leading to a tearful goodbye which is entirely derailed by its random placement in the Rozen Maiden timeline. It is true that Shinku refused to take it in season one, but if she had no choice but to do so once the Alice Game was ‘opened’ at the start of Traumend, why did it then take most of the series for Hinaichigo to lose it?

Enju
One of the biggest “now he is, now he isn’t” moments in anime came from Enju, a blonde doll maker who turned out to be a jealous apprentice of Rozen, rather than being the man himself. One must wonder how Enju survived as many decades as Rozen himself, not to mention how he managed to create his own Rozen Maiden copy, Barasuishou, without a part of the original Rosa Mystica.

‘Actually, there is another way’
As if to add insult to injury, the closing instalments of Traumend seem to indicate that there is a way to avoid the Alice Game and thus the destruction of six of the seven Rozen Maidens. The story is certainly flawed as it is, but to add such a predictable cop out to the Battle Royale is the most disappointing thing since the ending of Mai-HiME.

A Problem for the Future
Assuming there is a season three, a rather large problem arises; in the manga, Kirakishou enters the real world by consuming Hinaichigo, but in the anime, Hinaichigo has died and yet Kirakishou remains in the N-field. Exactly how this can be resolved if the anime has a third season will remain unknown until the point at which it actually airs.

Final Thoughts
Even though Rozen Maiden’s problems run deep, many of them could be exorcised if only Traumend and Overture did not exist. Even as I continue with the manga in the hopes of seeing the story ‘as it should be’, I must lament the disappointing place that this once enjoyable anime has ended up in.

This entry was posted in Anime Appraisals and tagged Rozen Maiden. Bookmark the permalink.