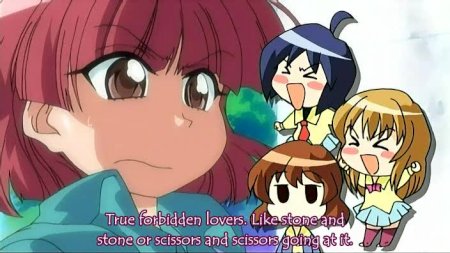 After what seems like an eternity of waiting, the fact that my blog got into the fabled 9rules can finally be announced, which of course furthers my plans for world domination is good news, given that I randomly submitted just to see if this relatively new and unknown blog could indeed make it. And of course I should say congratulations to all the other anime blogs that got accepted this round.

On a completely different note, Otogi-jushi Akazukin has been officially dropped; may it never be spoken of again.

Bakumatsu Kikansetsu Irohanihoheto 9: With everyone patiently waiting around for Nakaiya’s inevitable revival, this is one of those quiet between arc episodes which focus more on the characters than the story. With the troupe having split up for all of five minutes, the bulk of the spotlight falls on Akidazuki, who finally gets the level of dialogue and development any main character deserves. All in all, an interesting episode, even if little actually happens.

Death Note 12: This week, Light is invited to join the investigation group, whilst the audience gets their first good look at Misa, the second Kira and either potential ally or spanner in works for the first Kira. This should finally kick start the story in the way I’ve been expecting for the last three episodes, but in the meantime we are still bogged down with exposition and stills of Light. 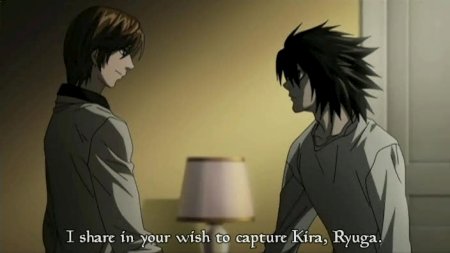 “That’s an impressive Zhuge Liang you have there, Light.”
“Why, thank you.”

The Gargoyle of the Yoshinagas 6: Whilst Futaba ignores the continued warnings about getting too close to plants in order to talk to new friend Himeko, Osiris and her creator are back for round two with Gargoyle. As well as Gargoyle’s trademark brand of action and humour, this episode proves that the series is equally adept at handling more serious scenes. My respect for Gargoyle is only growing- roll on episode seven.

Kanon 13: Mai’s story continues in this episode, although Yuuichi still seems to find ample time to check on his other girls when the opportunity arises. Perhaps it’s just the slow pacing as compared to the Toei version, but even compared to the level I’ve come to expect from Kanon, this was a hard episode to get into, although hopefully the next instalment will be a little more enticing.

Romance of the Three Kingdoms 37: An episode that fluctuates between mildly amusing and outright dull, ROTK 37 sees the righteous Liu Bei take his accompanying peasants with him on the run from Cao Cao. It may better than the last couple of episodes, but only the proximity of the end can keep me going now.

Saiunkoku Monogatari 24: Despite seeming to already be at the peak of excellence, SaiMono somehow manages to keep improving, as this episode demonstrates. Whilst Shuurei finds herself in the hands of ‘Lin Senya’, the rest of our heroes must deal with the less attractive members of the Sa family, clearly a clan who have grown evil due to their predominantly generic designs. With some well written character interactions and worthy background music, SaiMono 24 turns in a nearly flawless effort- the only weakness I noticed was a tendency for animation quality to drop here and there as it has done for some earlier episodes.

Shakugan no Shana Special: I never could be bothered to watch this when it was first subbed, but with Eclipse’s version bringing it to my attention again, I thought I may as well give it a go. Set mid-series, this is the hot springs episode Shana didn’t need, consisting of twenty-six minutes of tired and tasteless jokes before the whole thing was finally laid to rest. Even Shana’s attractive animation style could not make up for the poor quality of this special.

Shounen Onmyouji 9: How foolish I was to ever think we might get to the fight with Kyuuki sometime soon; instead, this episode is the final phase of the long and drawn out battle with Gaku, Shun and their endless minions, complete with flashback mode, destined powers, deus ex machina, and everything else that makes up a typical shounen series. I’m still waiting for the other Spirit Summons to do more than act as backup from the sidelines, but in the meantime Masahiro and Guren’s antics are parody gold.

Emma Bangaihen 5: An interesting if slightly disjointed chapter that seems to take the humble daily newspaper as its main character as it offers a glimpse into the lives of both London’s wealthy and its working class. Apart from a glimpse of young Emma in flashback, I didn’t see anything that really connected this to the main story, but the magic of the Emma world still makes it worth a look. 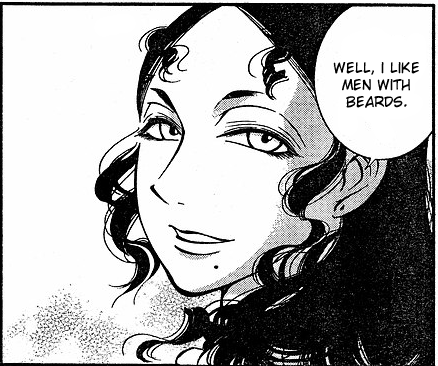 *CATCH-UP* Homunculus vols 1-7: If I’ve been efficient, my Homunculus review should have already been posted, but as per the normal procedure, a paragraph is needed here as well. The compelling tale of a man who begins to see strange things after a trepanation operation, Homunculus may be queasily graphic in places, but it remains none the less addictive for it. A recommended read for anyone with a strong enough stomach to handle it. 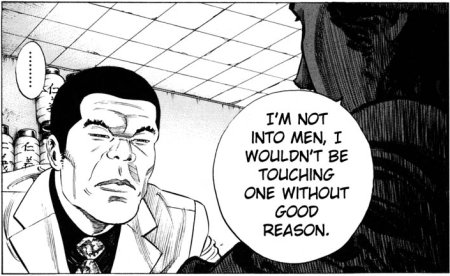 Shinigami no Ballad 1: If the prologue was promising, then the first proper chapter is nothing short of impressive, as SnB proves that the animated version was a mere taster of what the manga has in store. This chapter focuses on a boy who has been able to see shinigami since the death of his parents; now at high school, he seems to be on the verge of finding a measure of happiness with the girl he likes, but just why do the shinigami keep appearing? Although Momo herself only appears a couple of times here, I love both the story and artwork, and desperately want to read more. 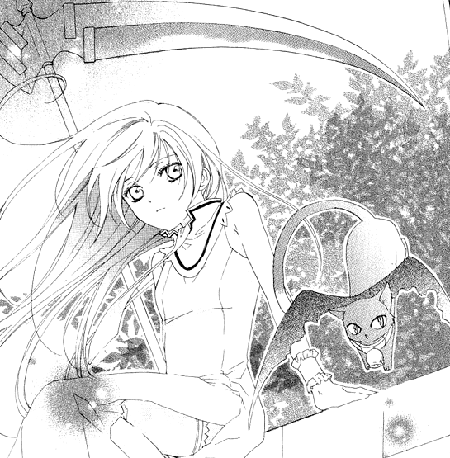 Tsubasa Reservoir Chronicle 138: The slow crawl through Infinity World continues with this chapter, which tantalising dangles explanations and an exciting chess match whilst actually delivering very little due to the slow pace and low page count. Where is the story going? What is the point of Infinity World? All these questions and more remain to be answered in the next 138 chapters.

Yotsuba& 41-2: Even after over forty chapters, the simplicity of Yotsuba’s world can still entice and entertain, with these two chapters showing no loss of quality. 41 sees Yotsuba help her father and Jumbo build a bookcase, whilst in 42 she heads next door to have fun with cup-and-cord ‘phones’. Despite the constant worry that Yotsuba is going to clumsily mess things up (the fact that the series can make me care about its world enough to worry about that is notable in itself), this is another pair of enjoyable chapters which rekindle my hope that ADV have not forgotten their promise to release volume four this year.

The Melancholy of Haruhi Suzumiya vol 6 chapter 3: Another one-off story, “Charmed at First Sight LOVER” (don’t ask why LOVER is capitalised, I have no idea) sees an old junior high classmate of Kyon’s contact him in order to confess that he has fallen in love with Nagato. Thus begins a somewhat tiresome chapter of Haruhi, featuring an irritating new character and a conclusion so swift and contrived that it makes the rest of the series look well plotted.

Saiunkoku Monogatari Prologue: When I was ranting about a need for the SaiMono novel translations, why did no one tell me that Shadow Dreams had already done a little work on volume one? Whilst it’s disheartening to see that it hasn’t been updated in a while, even the little bit that has been translated is an interesting read, and thus far devoid of the usual flat style that accompanies most novel translations.