Spoiler alert: mild spoilers for Death Note vol. 8 and beyond, major spoiler for Higurashi seventh arc (beyond the anime).

Although I firmly hope that I can find time for it, there may not be a Tuesday Rumble next week, since on the 30th I should be travelling over a hundred miles from home for an interview (if only my laptop had a working battery so I could use it on the way).

Death Note A-K
First there was L, then we discovered that L had been training two potential successors- Mello (M) and Near (N). As some might have wondered, however, did anything come before L, or did the dynasty randomly start in the middle of the alphabet? Fortunately, for everyone who has ever wondered what came before L, a new series, Death Note A-K, is finally here to fill in the blanks. This 77 volume series tells the story of the first great detective, A, and his successors, all the way up to L’s mentor K. Each of them has a dull and routine fascinating tale to tell; each of which has absolutely nothing to do with the titular Death Note, instead owing more to the overused crime drama. Learn about C foiled a great jewellery heist, or peruse H’s daring solution to a hostage situation- it’s all ready and waiting for you within the pages of Death Note A-K! Look forward to it!

Short Parody: Higurashi
Keiichi: I wonder who’s behind it all.

Takano: Gwakaka, I shall kill everyone! Er, I mean, I am not suspicious at all.

Takano stabs Tomitake just as everyone looks away, and then puts on an innocent expression as she exaggeratedly hides the knife behind her back.

Mion: It really is a mystery.

Takano: Why don’t you all just die so that I can be the main character?

Satoko: What was that, Takano-san?

Takano: Er, I said, “I’d be lying if I said I didn’t want to meet the main characters.”

Takano trips a passing generic, causing him to fall and break his neck.

Shion: Who cares about that, let’s just visit the fun-fun torture chamber.

Rika: I know who it is. Here’s a clue- she’s an older woman with blonde hair.

Everyone turns to Takano, who is busy strangling Irie. She quickly stops when she realises everyone is looking.

Takano: Hello, everyone- it’s a nice day, isn’t it?

Rena: I still can’t get it- can you give us another clue, Rika? 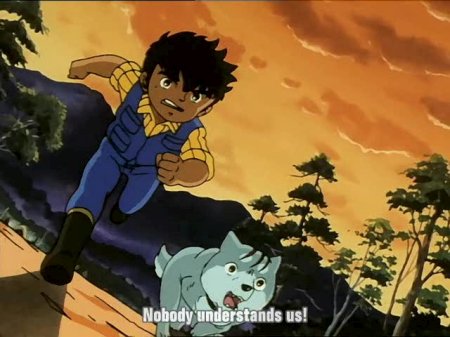 Daisuke realises that no one can comprehend the love he and Gin share. 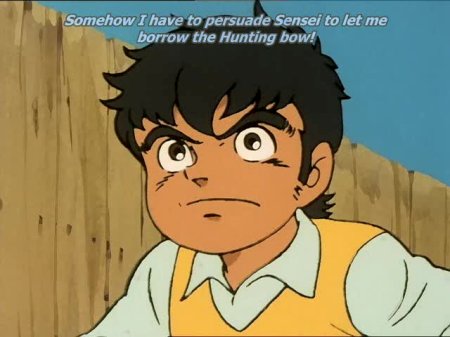 Maybe some Bow would show the level of their commitment. 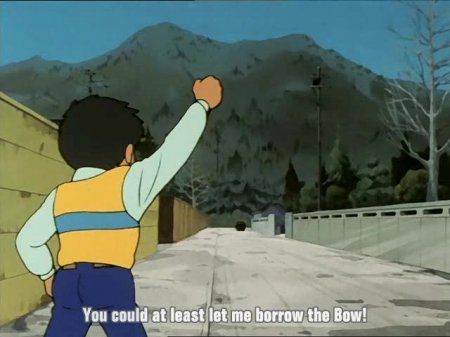 Daisuke uses advanced persuasion techniques in an attempt to get the Bow. 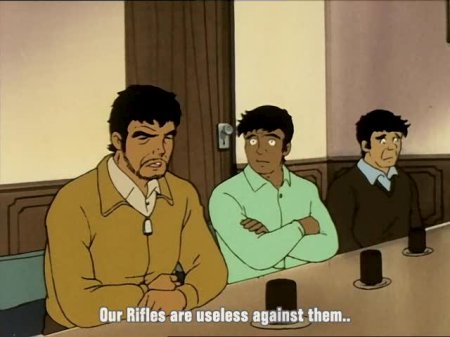 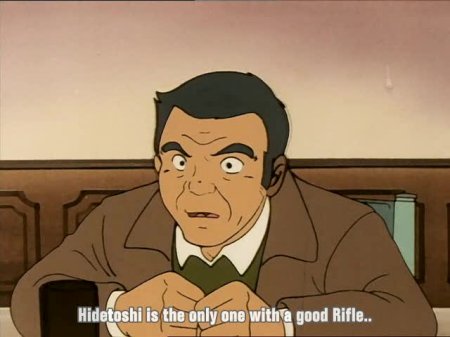 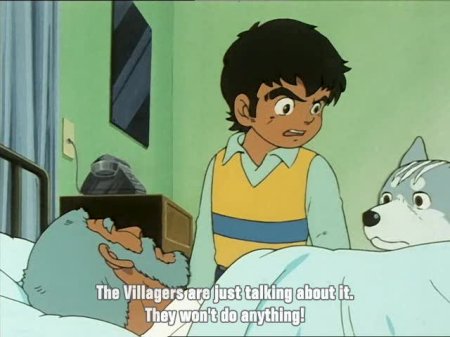 Grandpa explains how difficult it is to get the Villagers to try HARD GAY. 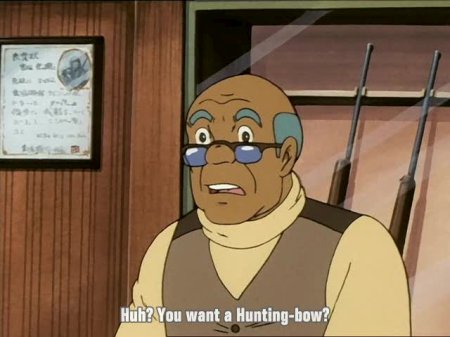 Daisuke decides the time has come to get his own Bow instead of always handling that of others. 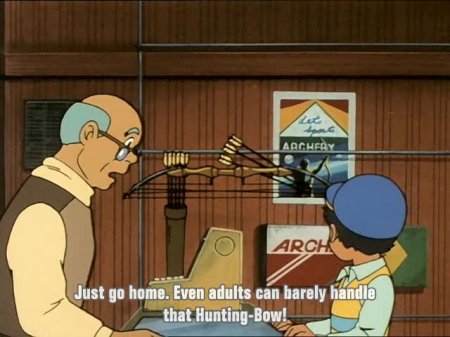 “Foolish boy, you are too young for HARD GAY.” 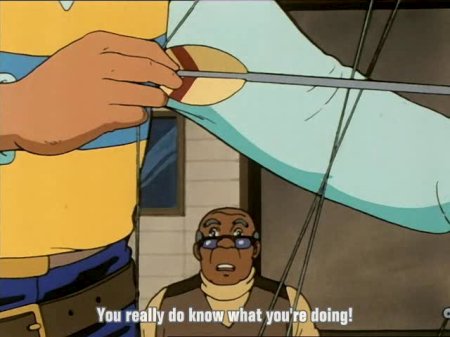 “It’s too late, for I have already been trained in the ways of HARD GAY.” 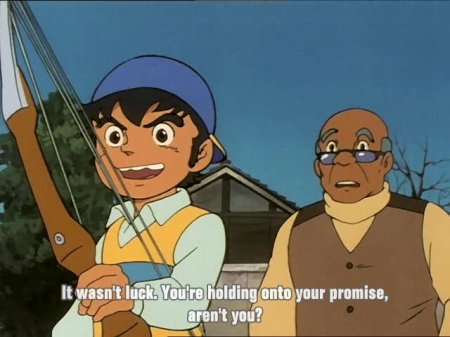 “I was holding onto something- I don’t usually call it a promise, though.” 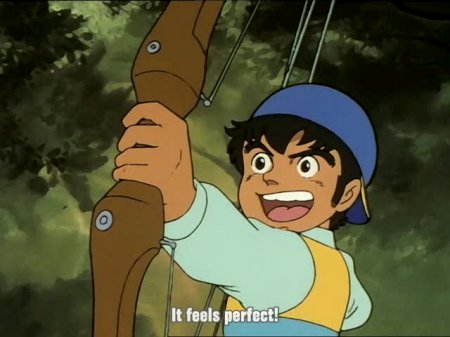 Quote of the Week: “I love cats. Cats have vital nutrients that we need.” courtesy of Vampire Princess Miyu TV.

Fruit of the Week: The evil apple empire is still expanding its influence with an appearance in Koi Kaze, but SaiMono introduces a fresh new contender in the form of the grape. 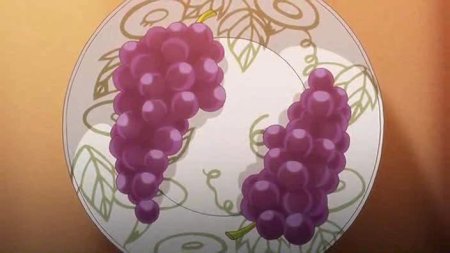 Mushroom of the Week: What is it with anime and strange mushrooms? In the past we’ve seen them in Mai-Otome and SaiMono, but now one makes an appearance in Nodame Cantabile. As if that weren’t suspicious enough, Anton has been doing a good trade in sweet potatoes, a key component of Sunrise’s beloved sweet potato dango…

HARD GAY Corner: Final Fantasy VII
From an early age, Cloud set his sights on becoming a HARD GAY man, but when he tried to enter the inner circle, they told him that his ‘equipment’ was simply too small. Unwilling to recall such humiliation, Cloud chose to cover up his past, and took the first opportunity to dispatch his well-endowed friend Zack and take over his life.

Now equipped with a massive ‘sword’, Cloud began the next phase of his search- the quest for a HARD GAY partner. Unfortunately, it was not to be an easy task; not only did women start chasing after him, but the male selection consisted of the likes of Barret (too rough in bed, and still hung up on his old lover Dyne) and Cid (a man who prefers machines to real men). With this in mind, Cloud set sights on the most HARD GAY man of his world- Sephiroth. With blade work that was second to none, Sephiroth was infamous for his intense HARD GAY- so much so, in fact, that few of his lovers ever survived their encounters.

For many months, Cloud chased Sephiroth to the ends of the earth, but each time they met, Sephiroth deemed that he was not yet HARD GAY enough to be worthy of his idol’s bed. Nonetheless, Sephiroth gave Cloud plenty of practise, and even killed off the troublesome Aeris so that she could not come between them. Finally, once Cloud had met his maximum potential, Sephiroth promised to wait for him at the North Crater, where they went on to have an explosive HARD GAY encounter that ended up killing Sephiroth himself. Although it meant the end of his life, Sephiroth was heard to exclaim in his dying words that he was happy to have finally found a partner who could satisfy his needs.

OST spotlight: Utawarerumono Game OST
My desire for this OST arose from just one track- the opening theme, “A Song Given Voice”. From the moment I heard it on the anime trailer, I fell in love with the song, a melodic wind and percussion piece that perfectly captures the action and fantasy that should be in True Uta. In comparison, the rest of the OST is a mix of slow lullabies, standard battle music and that cheerfully repetitive style of track that seems obligatory for visual novels; even though it isn’t great, it is oddly catchy.

Mini-rant: Stop stealing the spotlight, you spiky-haired moron!
It is every boy’s dream to become the destined spiky-haired who saved the world (and quite possibly the dream of many men who would be too embarrassed to admit it), but unfortunately that fact comes with a price- we end up with an excess of such destined heroes in both anime and games. Whilst irksome, the presence of such characters could be endured if not for one thing- the fact that the more interesting supporting characters always get sidelined.

Let’s start with female characters; much as they make a certain breed of viewer insecure, I love to see strong female characters (preferably ones who aren’t putting up a front until they can fall into the arms of a REAL MAN) in anime, but when it comes to shounen series, they are almost nonexistent. The likes of Rukia and Tokiko seem promising enough, but within a handful of episodes, the male character has not only surpassed their years of training a few days, but has proven himself to always know better than his female companion. Whilst she ends up as a fairly puny weakling who always makes the wrong decision, Spiky-Hair need only grab his oversized blade and protect his fair maiden from all but the most generic of villains.

It isn’t just women who suffer, however; rival males are equally likely to fall to this curse. They may initially be more powerful than the hero, but unlike him, they do not have the unlimited potential that makes him factors of ten stronger than they can ever hope to become. They have more interesting personalities and better character designs, but no matter how hard they try, the powers of destiny and friendship will never be on their side.

Brainless and predictable as it often is, I can’t help wanting to watch shounen series sometimes (provided they aren’t some 300+ episode ‘lets run the story into the ground until no one cares’ series), but the prominence of Spiky-Hair is a fact that is always bound to ruin my experience. Crude as it is, I would enjoy Busou Renkin much more if Tokiko could hold her own alongside Kazuki; after all, isn’t a blue haired girl with a Valkyrie Skirt far more appealing than Generic Hero #89251 and his lance? 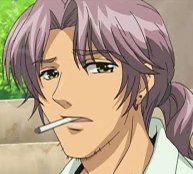 This week’s head to head is between two semi-bishie teachers- Isaac Cavendish of Meine Liebe, and Kanazawa from La Corda d’Oro. Both are laid back smokers who are divorced from the main bishie group, but nonetheless they each have an important role to play in the ‘plot’ of their respective series. 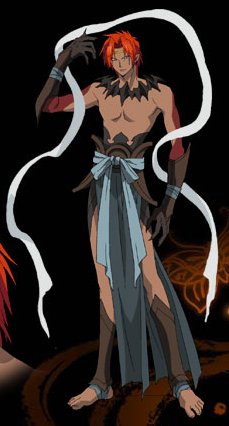 Having been inspired by Hazel’s post on the new and old bishies of Angelique, I’ve decided it’s about time some other poorly attired anime characters were placed under scrutiny for their dubious tastes in clothing. First up is Shounen Onmyouji’s Guren.

Guren, whatever you were thinking when you chose this outfit, we can only despair that you weren’t thinking something else. Despite having sufficient material to cover his body, Guren has chosen to pointlessly attach it all to his waist, leaving his chest, upper legs and feet exposed- don’t bother with gloves and greaves until you’ve got the basics covered! His taste in accessories is also suspect; I can live with the headband since it performs a vital function and is reasonably unobtrusive, but the necklace looks like chunks of wood all connected together, and the floating white scarf defies all purpose.

chevalier 12 movie: Chevalier 12 is so important, it gets its own movie version.

“stealing their uniforms”: hands off.

“A CHANGE OF PACE” wordpress.com: uh…okay…

hack Episodes cover: Yes, the episode audio should be covered with my parody track.

alice 19th episode 1: you may have to wait indefinitely for this series to be made into an anime.

rmxp side view extend anime script: I was with you until ‘extend anime’.

“Is that old dresser an antique? How much is it worth? Find out now.”

“i love antiques too!”