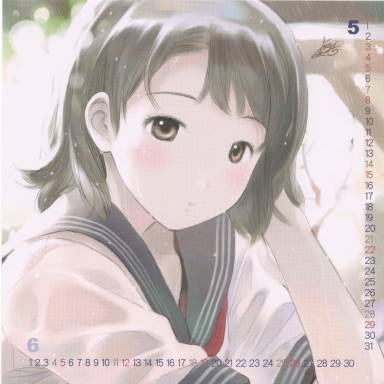 This may be from a calendar, but I figured everyone was sick of seeing the same two pictures of Nanoka.

Koshiro and Nanoka are siblings, but thanks to their parents’ divorce and twelve year age gap, they haven’t seen each other since Nanoka was a baby. All that is about to change, however, for once she starts high school, Nanoka will be moving in with Koshiro and her father to avoid a lengthy commute each morning. Now, Koshiro will have to learn how to cope with this unexpected intrusion into his life- but will his relationship with Nanoka evolve into something beyond what is considered normal for a brother and sister?

Possibility the best known animated series dealing with incest, Koi Kaze takes what is a rather awkward and uncomfortable topic and turns into a compelling story. Regardless of your real-life stance on incest, Koi Kaze will not fail to touch you emotionally- but where the manga is simply an enjoyable but not memorable outing, the anime takes the franchise to new heights. Just how did the one manage to improve on other?

The manga: not bad, I guess
Before investing in the anime, I decided to give the manga a try in order to get a feel for the franchise- a move which turned out to be fairly pointless when I ended up purchasing and watching the box set before I had progressed beyond the second volume. Nonetheless, fresh from the anime, I decided to complete the manga and see how the two compared to each other.

In manga form, Koi Kaze is something of a slow starter; it may only be five volumes, but it still takes until some way into the second volume to feel that the story is really going anywhere. Although the story is by no means poor, it is difficult to feel the full emotion of the characters; the potential is clear, but there is still a degree of separation between on-page events and the person reading it. If anything, it is akin to stepping into the beginners’ pool for a gentle introduction to the story without ever seeing the full depths that it can achieve.

Storyline aside, Koi Kaze does have interesting visuals; although somewhat on the minimal side, the artwork seems more akin to a wood etching than a pen drawing- a unique and gentle style that perfectly complements the tone of the series.

The anime: improving on the original
As a thirteen episode series that aired whilst the manga was still running, Koi Kaze necessarily does not cover as much material as the original, but whilst there are a few scenes that would have been interesting to see in animated form, overall the tighter pacing and rearranged order of scenes helps to bring out the best in the franchise. Where the manga left one a little divorced from events, the addition of colour, movement and sound are all essential in conveying the emotions of the characters. The gentle music, minimal art and softly spoken characters weave a magic akin to that of any slice-of-life series, the perfect veneer for the tangled web of emotions that lurks beneath. Even the scenes which match the manga word for word bring new life to the dialogue and events.

Naturally, she soon learns that this is not the case, but perhaps his brief bursts of kindness, combined with her desire for an older man in her life and a lack of experience with males in general not only strengthened her feelings beyond the norm, but convinced her that her feelings contained romantic elements.

Final Thoughts
In terms of pure recommendations, Koi Kaze the anime is certainly a series all mature fans of romance should watch; as mentioned above, the viewer’s real-life stance on incest is of little concern to this touching and bittersweet story. Whilst not nearly as effective, the manga does at least offer an interesting complement to its animated counterpart, filling in a few gaps and presenting a uniquely beautiful art style.

As for the deeper analysis, there is certainly more to be said than the few points that I have picked out here, and anyone who likes being left with plenty of subject matter to think and write about will not be wanting for material if they choose to do a similar thing for this series.

This entry was posted in Anime Appraisals, Manga. Bookmark the permalink.

3 Responses to Koi Kaze, Anime and Manga: Two Sides of the Same Story