On the boat to England, d’Eon sits in his cabin, contemplating his sword. Durand enters.

Durand: What’s done is done- there’s no point regretting the people you’ve slept with after the fact. 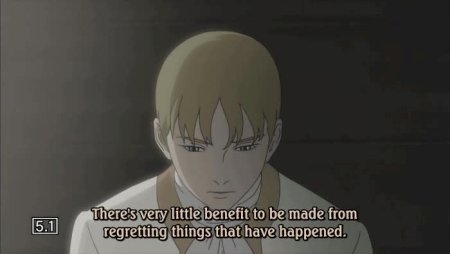 D’Eon: I know that, but still…so many of the people I have had HARD GAY with have died. All I am left with is my bloodstained ‘sword’. 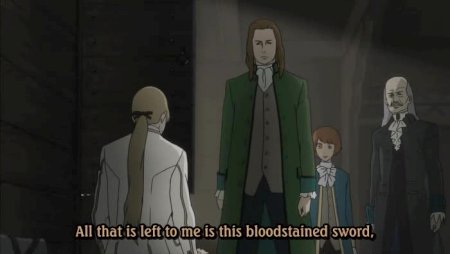 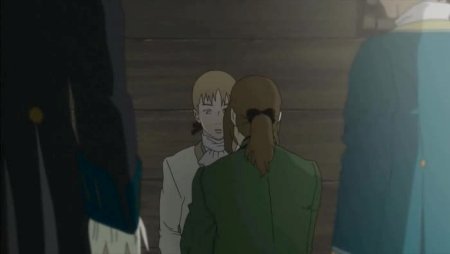 Durand: Who cares about them, they were just one shot villains. All I know is that I won’t let Lia have you to herself. 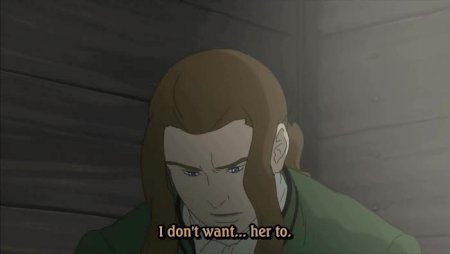 The boat reaches London and the Four Musketeers disembark.

(D’Eon: My HARD GAY sense is tingling- Robespierre must be close by.)

At a nearby tavern, the Four Musketeers drink beer and plan their next move.

Durand: I believe our first mission should be to contact the French Ambassador, Guercy. Unlike English men and their foreign ways, he should have a good handle on solid French HARD GAY.

Teillagory: Guercy, eh? He is spoken of highly in HARD GAY circles.

(D’Eon: Oh great, just another named character to divert screen time away from me.)

D’Eon: Can we really trust an outsider like Guercy?

Durand: Stop whining, d’Eon. The four of us have only had each other to sleep with on the journey here, so we should all look forward to something new.

That night, d’Eon cannot sleep. He picks up Durand’s watch and sees an image of Robespierre giving it to Durand.

Durand: That watch was a gift from my former lover.

Durand: Truly a man worthy of my HARD GAY- once he even serviced the king himself.

D’Eon: How could such a man turn away from the righteous path of the HARD GAY monarchy?

Durand: I don’t know…towards the end he acted as if even the King himself was not HARD GAY enough to satisfy his needs. I hope you won’t mind, but when the time comes, I’d like to see Max one more time, and settle our love affair with my own hands. 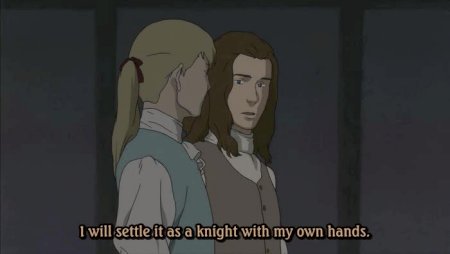 Back in France, Pompadour talks to her generic underling.

Pompadour: Russia was a failure, but no matter, for everything is going to plan. Gwakakaka!

Underling: I see you have been practising, Madame.

Meanwhile, Louis is talking to Broglie.

Louis: So, it seems that the main characters have gone to England- I guess that means less screen time for us, and not much chance of HARD GAY for me.

Broglie: Uh, sir, I’m always here if you need me.

Louis: As I said, not much chance of HARD GAY for me. Well, I suppose I can ease the pain by writing a love letter to Durand to remind him of all the secret talents and bedroom strategies he is missing out on. Broglie, be sure to make a copy of this that only Durand can read- I don’t want d’Eon getting jealous. 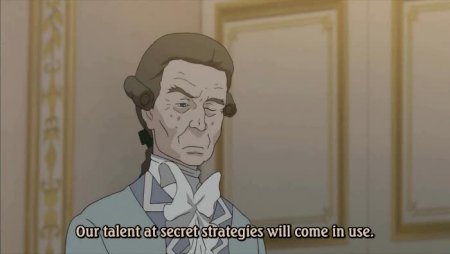 Elsewhere, Giuseppe and Lorenza are sharing a room. Giuseppe tries to look in the book of HARD GAY.

Giuseppe: Damn, I just can’t get it open.

Lorenza picks up the book, but cannot open it.

Robespierre enters and tosses a bag of coins to Giuseppe.

Robespierre: I see you have been trying to look through my book. You should know that it only opens to people with level ten skills in HARD GAY and Picking Up Books. It will only open to everyone once the HARD GAY world that I have envisioned comes to pass. 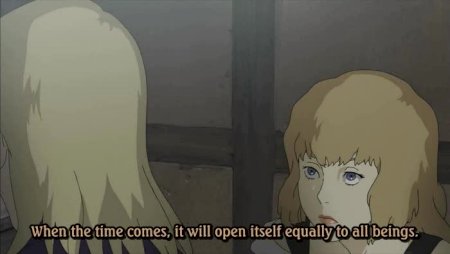 Guercy: Ah, Durand, long time no see! When was the last time we slept together?

Durand: As you can see, I have new partners now.

Guercy: Yes, I recognise the famed Teillagory! Teillagory, I hear you lost your son in the war…have the nights been long and lonely since then?

Guercy: Ah, is that the famed Robin I see? Although some say you are just a useless sidekick, I am sure you must be a prodigious man of HARD GAY to be able to keep up with your esteemed peers! 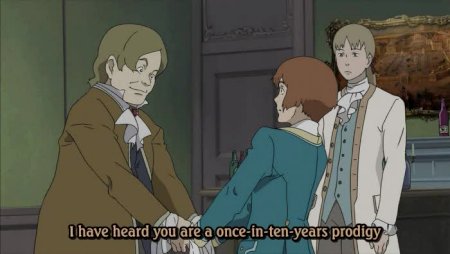 Guercy: And is that d’Eon du Beaumont over there, the main character himself? I admire you so much for taking the HARD path, truly the only proper course for a knight such as yourself. Now, everyone, let’s dispense with the formalities and head straight to the bedroom! 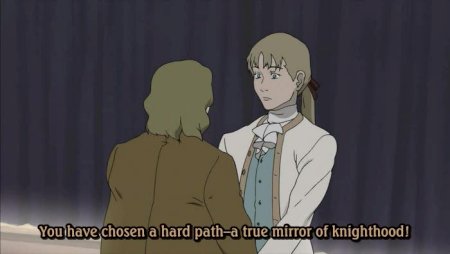 Everyone follows Guercy into the next room, where a maid prepares tea.

Guercy: Although it does not originate here, tea is essential for living in England. Even foreigners must learn how to sip it properly if they wish to be taken seriously here.

Guercy inhales the scent of his tea.

Guercy: Ah, nothing like a nice cup of tea! Anyway, down to business, what are you here for?

Guercy: Hmm, in that case, it could be expensive- especially if you want HARD GAY thrown in on top.

The Four Musketeers go away to discuss this.

Robin: How can he demand money from the main characters?

Durand: It may seem unreasonable, but his HARD GAY is very good.

Back at Guercy’s office, the Four Musketeers hand over payment.

Guercy: A pleasure doing business with you. Now that you have paid me, I can unlock Exposition Mode Level One, and talk a little about history, the English government, and Poets.

D’Eon: We already know something about Poets- specifically, about Maximilien Robespierre. 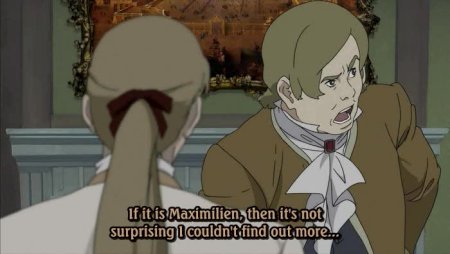 D’Eon: Anyway, I have somehow deduced that our first mission should be to acquire important documents from Robert Wood’s briefcase.

Guercy: In that case, please come to my well appointed storeroom in order to select equipment for this mission.

The party heads to the storeroom. 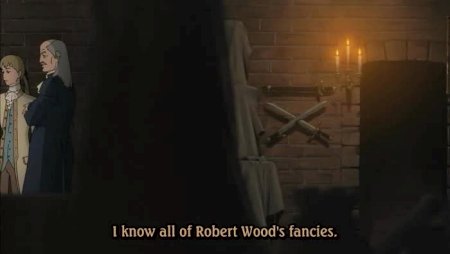 Guercy: Like any red-blooded man, Wood has a love of wine and ‘swords’…some say he is BI and would also be partial to women, but I have no idea how one would go about seducing a woman. 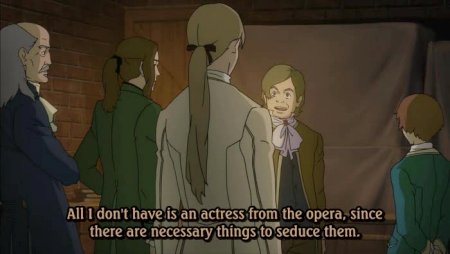 Lia: Who needs a generic woman? I can be his companion. 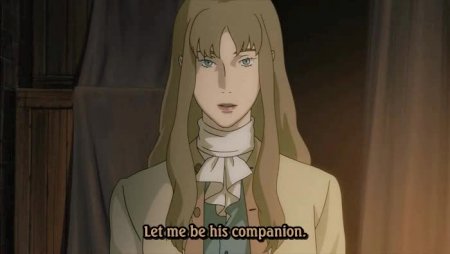 Guercy: It is true that you do look a lot like a woman…I expect a man in drag will be sufficient.

Meanwhile, Robespierre, Giuseppe and Lorenza reach one of the fabled gates of HARD GAY. Robespierre passes through it easily.

Giuseppe: What is this?

Lorenza: It seems to be a gate of HARD GAY.

Robespierre: Dashwood inscribed powerful words of HARD GAY on the gate to ward off unbelievers.

The trio heads into Dashwood’s abbey, which is populated by hooded men.

Robespierre: These are all Dashwood’s beloved sons, trained from a young age in the practices of HARD GAY. 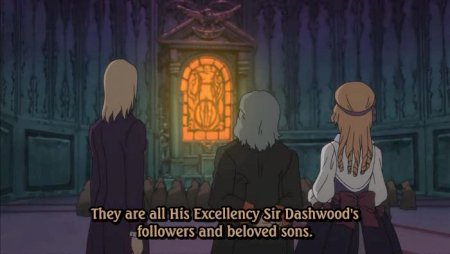 The named characters take a passageway to Dashwood’s room, and are led inside by Paul Whitehead.

Robespierre: Sir Dashwood, I have returned.

Dashwood: My beloved son, I have been waiting for you, for you were always the bishiest and least generic of the men who followed my HARD GAY teachings. Come closer so that I may embrace you- although you must also explain why you let the side of good win in Russia. 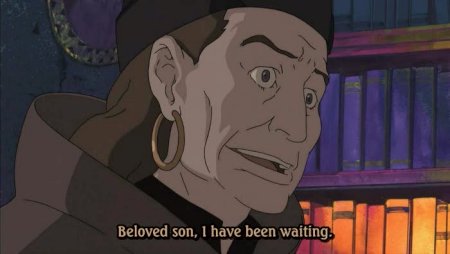 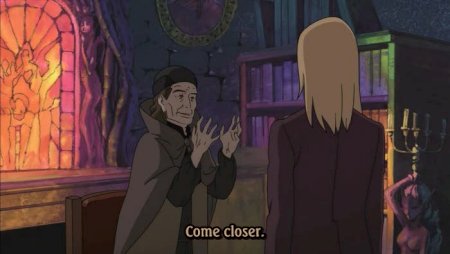 Robespierre: The politics of Russia are insignificant compared to the goal of using the Psalm of the King to create a HARD GAY world.

Dashwood: Ah, Robespierre, you are truly a worthy son, but you must remember that part of a villain is to create ultimately pointless schemes for the heroes to foil.

Robespierre: I do have many schemes, but for them, I will need to hire out Whitehead.

Dashwood: Hmm, I suppose I may as well let him have some screen time. Whitehead, go with the man.

That evening, the Four Musketeers go to a banquet in order to see Wood. D’Eon is dressed as a woman.

(D’Eon: I must never admit this out loud, but this dress feels oddly comfortable.)

(Durand: I wish I could have been the one to wear the dress.)

Lia-d’Eon presents herself to the King and Queen.

Charlotte: Lia! Did you come back to give me HARD YURI?

Lia: Now, now, your majesty, your husband is listening.

Guercy: I didn’t know Lia was acquainted with the Queen.

Durand: She seems to have made her way around every attractive woman of the age.

Guercy: Your Majesty, I am organising a HARD GAY evening party at the embassy, if you would be interested in attending.

Wood: I would ask that you not invite His Majesty to arbitrary HARD GAY gatherings without going through the proper procedure.

Charlotte: Oh, Wood, you are always so frigid! 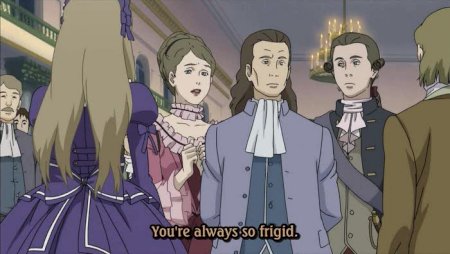 Guercy: Pay no heed to him, his assets are small.

George: I think I know what the problem is- Wood would like to join us for the HARD GAY. 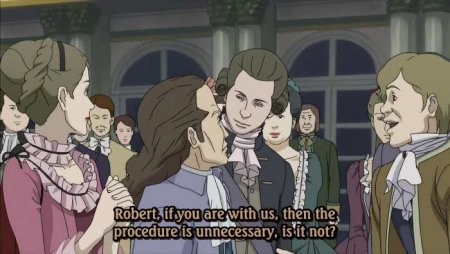 Wood: Well, I suppose I can accommodate His Majesty’s wishes.

Charlotte: I will come along too, to give Lia some HARD YURI.

(D’Eon: Damn, if Lia is with Charlotte all night, I won’t get to join in the HARD GAY.)

After the banquet, everyone returns to Guercy’s office.

Guercy: This is great! Thanks to you, I can invite everyone over for a HARD GAY party!

In his room, d’Eon looks at his dress.

(D’Eon: When will I find another excuse to dress up in this way?)

D’Eon sees a memory of Lia and Robespierre.

Robespierre: The Psalm of the King will open the door to a new HARD GAY world.

Lia: Why do you always speak of HARD GAY? Surely I am all you need.

Robespierre: Then come with me, and help me make it into a true world of BI. 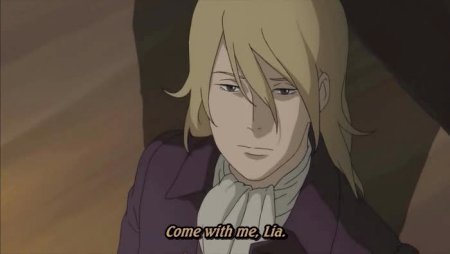 Lia: I cannot, for I need HARD YURI too.

As the vision ends, d’Eon sees Robespierre and Lia in the mirror.

Robespierre: Lia never wanted brocon with you- her heart belongs to me.

D’Eon: I refuse to believe it!

D’Eon smashes the mirror, but Robespierre appears behind us. 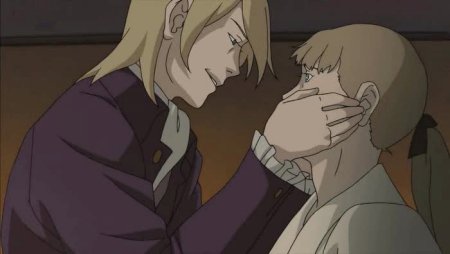