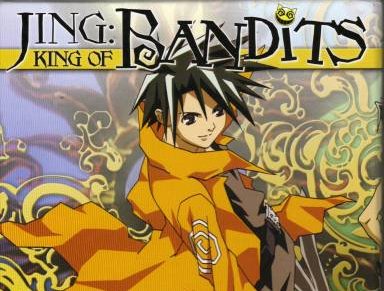 Some months ago, I reviewed the first volume of King of Bandit Jing, and my verdict was far from positive- if anything, the series seemed to be the most pointless and generic action-based ‘comedy’ that ever existed. Nonetheless, since the whole series was only thirteen episodes long, I resolved to watch the rest, and at long last, that task has been accomplished. Fortunately for me, each subsequent volume of the series only contained three episodes, which, by skipping both OP and ED, can be condensed into little more than an hour’s viewing. Under this new, less painful, viewing arrangement, Jing did prove to be better than it first appeared, if only slightly.

The first volume of Jing was formulaic to a fault, and the rest of the series is no exception, with each mission following the exact pattern detailed in my first review. Fortunately, not all of the stories are as forgettable as those seen in the first four episodes, with a handful of episodes, such as a two-parter in which Jing searches for the key to immortality, actually proving to be mildly entertaining. There’s no hint of a main plot whatsoever, but perhaps that is for the best; under the circumstances, trying to wedge one into such a mediocre series would probably have only been tiresome at best.

Perhaps what is most disappointing about the series is not the fact that it is so average, but that it would have taken very little to make it that much better. Instead of being something of a one-trick character, Jing would have been far more interesting if we had seen him use a repertoire of attacks and tricks befitting a boy who somehow earned the title of King of Bandits. An episode or two looking into his past would not have gone amiss either, and would certainly have given his rather paper-thin personality the development it needed.

Visually, King of Bandit Jing remains as generally unappealing as it did in the first volume- Jing and the token weekly female may not be too bad, but the vast majority of supporting characters are somewhat bizarre and ugly. Background music is simplistic, but generally in keeping with the tone of the series.

Final Thoughts
Although it did pick up a little in comparison to its earlier episodes, King of Bandit Jing was ultimately a low budget series that could never rise above the realms of the entirely average. If you’re in the mood for a mix of comedy, fantasy and action, try Rune Soldier instead.

This entry was posted in Series reviews and tagged King of Bandit Jing. Bookmark the permalink.

2 Responses to King of Bandit Jing: The Final Verdict